Second-year wide receiver Alshon Jeffery has been a big beneficiary in the Chicago Bears' new offense. Let's take a look at what Jeffery brings to the table.

Share All sharing options for: CoachSpeak: Jim Schwartz on the Bears offense

We don't need to talk about the implications of this Sunday's game at Soldier Field. We all know what's at stake. You're juiced. I'm juiced. Now that Jay Cutler has been cleared to play, Ndamukong Suh is juiced. Exciting times, friend!  But, on a sad note, Cutler's return deprives me of the opportunity to write about Josh McCown and the 2006 Lions. Just look at that roster!

By any metric, the Chicago Bears offense has improved dramatically under Marc Trestman's watch. Chicago is currently second in the NFL in points per game, 10th in yards per game and ranked 11th overall, according to Pro Football Focus. A lot of that improvement has come as a result of Bears quarterbacks distributing the ball evenly. Jim Schwartz talked about that this week:

"Last year they were really heavy in throwing the ball to Brandon Marshall, rightfully so he's a great player. You look at the way they're distributing the ball to (Alshon) Jeffery, (Martellus) Bennett and also to (Matt) Forte, those guys are like one, two, three, four and they're all equal options for the quarterback."

The players Schwartz mentioned may all be equal options for the quarterback, but for the purposes of this column, I'll focus on Alshon Jeffery. The second-year wide receiver for the Bears has seen a dramatic uptick in his production this season, having already eclipsed his total receptions and nearly doubled his yardage from his rookie year (in which he played just 10 games). At his current rate, Jeffery is on pace for 6 TDs and more than 1,200 yards, excellent numbers for almost any No. 2 wide receiver. Most recently, Jeffery has been taking opposing defenses to the woodshed on intermediate and deep routes: 10 of his last 20 catches have gone for at least 20 yards, and another six have gone for 10 or more. Lately, if you see Jeffery with the ball near the line of scrimmage, it's more likely the result of an end-around than a pass.

So, how are the Bears using Jeffery on these deep plays, and how are they beating opposing defenses? Our resources are limited here -- if you're desperately seeking another reason to hate Soldier Field (as if there weren't enough already), check out the viewing angle they provide on film: 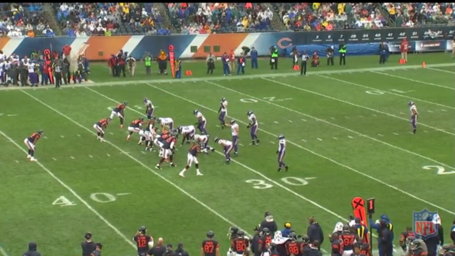 Can't say I'd complain about these seats, but this view leaves a lot to be desired for illustrating plays. On to the Bears' away games, then! 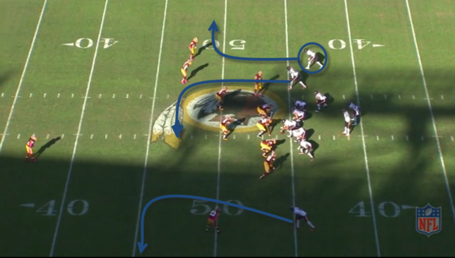 Jeffery is lined up as the top wide receiver here, off the line of scrimmage. Brandon Marshall is at the bottom. At the snap, Marshall runs what starts as an 8-yard slant before turning out toward the sideline. Bennett (next to Jeffery) turns toward Marshall's side almost at that same moment, while Jeffery runs an out to the top of the screen. The safety on Marshall's side rightfully crashes down on his route, while the safety up top keys on Bennett. 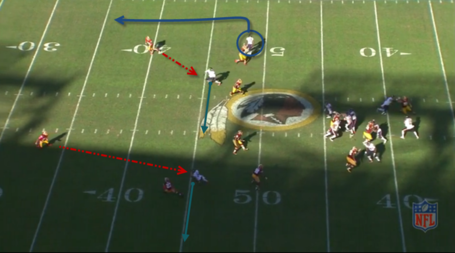 When that top safety makes a move on Bennett's route, Jeffery's out becomes an out-and-up into a lot of open field. 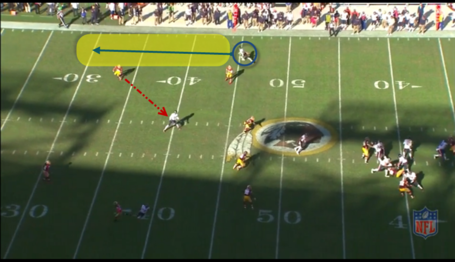 The result is a 20-yard gain, which could have been more with a better throw. But credit McCown for making the right read here. Had the safety gone to the sideline with Jeffery, a throw over the linebackers in coverage gives Bennett an easy catch. It's a well-designed play and pretty fun to watch develop, honestly.

For all the cool plays the Bears run under Trestman, a lot of Jeffery's deep balls are just sideline go routes. 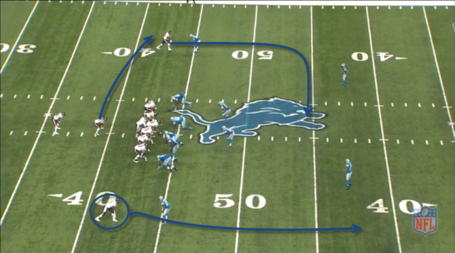 Jeffery is lined up at the bottom of the image here. Marshall is at the top. This is going to be a pretty basic I-formation play-action pass. Jeffery, as we noted, runs a go route down the sideline. Marshall runs a 10-yard crossing route, while the fullback hits the flats after the play fake. There's plenty of time on the clock (10:42 in the third quarter), and the Lions are sitting on a three-score lead. As such, both safeties are back deep, so as not to give up the big play.

Unfortunately, the big play happens, and as loathe as I am to give Smokin' Jay any credit, he deserves some here. 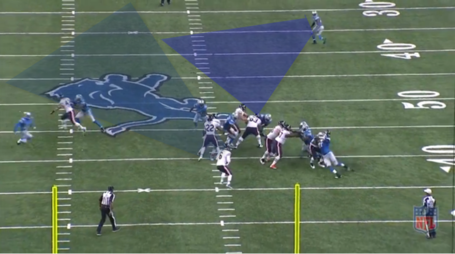 Cutler is looking Marshall's way, and Glover Quin (top of the image) starts to come across in anticipation of that throw, leaving Jeffery alone one-on-one down the sideline. All that's left is a deep ball to a big wide receiver and a 44-yard pickup.

Jeffery actually went for over 100 yards receiving and a touchdown in this game, but his impact wasn't as large as you'd think, given the numbers. Two of Cutler's three interceptions in this game came on passes to Jeffery. Both were by Louis Delmas, who did outstanding work in coverage. 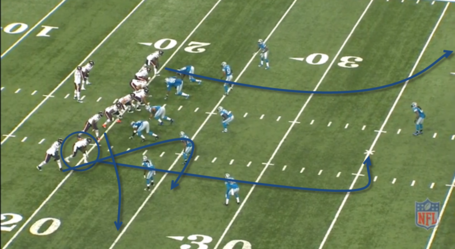 Jeffery is the middle receiver in the bunch formation at the bottom of the screen. He's going to run 15 yards down the seam and sit down in coverage, drifting toward the middle of the field. Bennett (bottom of the bunch) goes about five yards toward the middle of the field before drifting to the outside as a safety valve. The inside receiver hits the flats immediately. Marshall (at the top) is going to run down the seam 22 yards before breaking outside, presumably with the intention of drawing Delmas away from the middle. 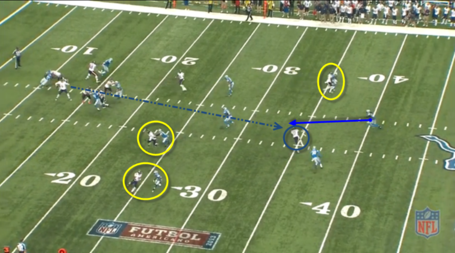 Delmas, of course, doesn't bite. The timing is slightly off, and before Marshall hits his break, the ball is being delivered. Delmas gets a phenomenal jump on the throw for the Lions' first pick of the day. (In Cutler's defense, this is probably the correct read downfield. Note the coverage on the other receivers. A slightly quicker throw probably results in a completion.)

Alshon Jeffery has only gotten better since the Lions last saw him and is a legitimate deep threat for the Bears. The national coverage of this Sunday's game seems to revolve around the "turnover-plagued" Bears from Week 4. Chicago gave the ball away four times and still had an outside shot at winning, so if they can avoid such sloppy play, their chances on Sunday are great, right? What doesn't get mentioned is that the Lions turned the ball over three times themselves. The turnover ratio played much less of a role than analysts care to acknowledge. (Just goes to show how the outcome affects the narrative.)

If the Lions can eliminate the big play from Jeffery and the rest of the Bears offense, they'll be in great shape to get their first win in Chicago of the Jim Schwartz era and take the driver's seat in the NFC North.