Our statistical-based preview breaks down the important matchup between the Detroit Lions and the Baltimore Ravens.

Share All sharing options for: On Paper: Detroit Lions vs. Baltimore Ravens

After a huge setback in their NFC North lead, the Detroit Lions (7-6) look to rebound against the Baltimore Ravens (7-6). The Ravens are clinging to playoff hopes in the form of the AFC wild-card race. Baltimore currently holds the final playoff spot, but the San Diego Chargers, Miami Dolphins and New York Jets are nipping at their heels. This is a wildly important game for both teams. So let's not waste any more time and head to the charts. 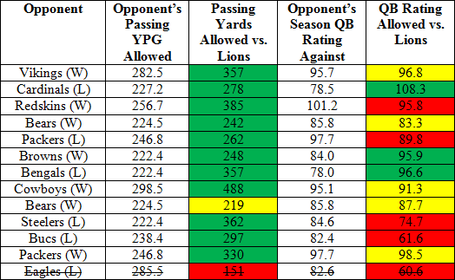 Matthew Stafford's downward spiral into mediocrity continues. The last time he significantly outgained the opponent's passer rating against average was way back against the Cincinnati Bengals. Since then, he's thrown 10 interceptions to just 12 touchdowns. He has only thrown for a passer rating over 100 once this season (he did so 10 times in 2011 and 3 times in 2012).

The Lions have slid to 12th in passer rating (88.2), eighth in yards per attempt (7.6) and 25th in completion percentage (58.3%). They remain an above-average passing team, but they are nowhere near as efficient as their overall ranking suggests. 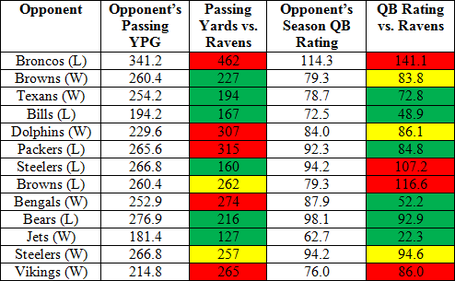 Player to watch: Elvis Dumervil. Dumervil is recovering from an ankle injury and may not be able to go on Monday, but if he can, watch out. He already has 9.5 sacks this season and 2 forced fumbles. He may be the best pass rusher the Lions have faced all season.

Advantage: Lions +0.5. I still think the Lions will be able to move the ball fairly consistently against the moderate Ravens defense. The big question, however, is will the Lions be able to take care of the ball? The good news is that the Ravens have only 9 interceptions on the season (t-25th). Additionally, the Ravens have allowed the most pass plays of 40+ yards of any team this year (yes, even more than the Lions). I'm still not sold on the Lions pass offense being as deadly as many think, but they have a decent opportunity to rebound this week. 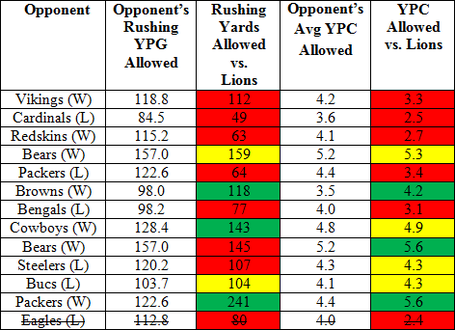 This chart looks worse than it really is. The Lions have actually met or surpassed yards per carry averages in six of their last eight games. However, they've been held under yardage averages in four of those eight games.

This is likely the result of the Lions being a pass-heavy team. In fact, they rank 18th in rushing attempts. The key to this rushing attack isn't explosiveness, but efficiency. Though they are one of five teams that have yet to tally a rush of 40+ yards, they are earning first downs on 24.2% of their rushes, which ranks them seventh overall. Additionally, they have 12 rushing touchdowns, tied for ninth-most.

The elephant in the room, however, is fumbles. Detroit has 17 fumbles from rushers on the season, which is SEVEN MORE than anyone else in the league. That's insanely bad. 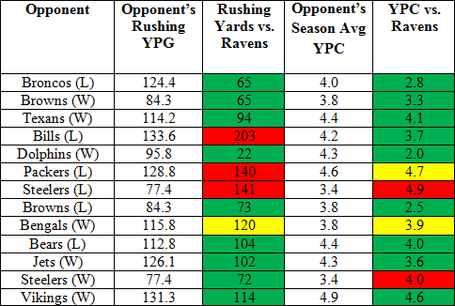 The Ravens have a pretty stout run defense, only allowing three teams to surpass yardage averages and two to outgain YPC averages.

Baltimore is allowing just 3.8 a carry (t-fourth) and is only ceding first downs on 17.0% of carries (third). Additionally, they have only allowed 3 rushing touchdowns all season (first). By almost all measures, this is a top-five rushing defense.

Player to watch: Haloti Ngata. Although Ngata has remained fairly quiet on the stat sheet (34 tackles, 2 for loss), he is still a force in the middle of that line. Ngata has been fighting a knee injury lately, but when he's healthy, he's still a Pro Bowler.

Advantage: Ravens +1. The Lions are not heavily reliant on the running game, but if they are striving to be exceptionally balanced against Baltimore, they may run into some problems. They'll likely have Reggie Bush back this week, but I expect his return to have much more of an impact on the passing game. 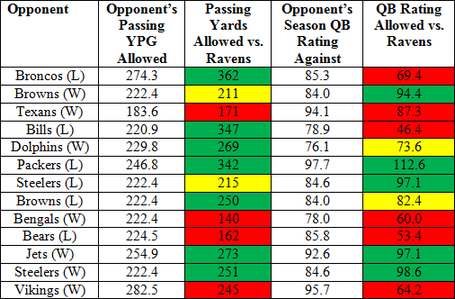 Joe Flacco and the Ravens passing offense have remained calmly average this season. They've outgained defenses' yardage averages in seven of 13 games and passer rating averages in five of 13.

The overall stats, however, tell a bit of a different story. Baltimore ranks 27th in passer rating (76.9), t-25th in yards per attempt (6.6) and t-18th in completion percentage (59.3%). The reason for the mismatch seems to be Flacco's wild inconsistency. He has five games with a passer rating above 94. But he also has four games below a rating of 65.

The takeaway from this is that when the Ravens passing game is clicking, it is well above average (but not great). However, when Baltimore is struggling, they struggle badly. 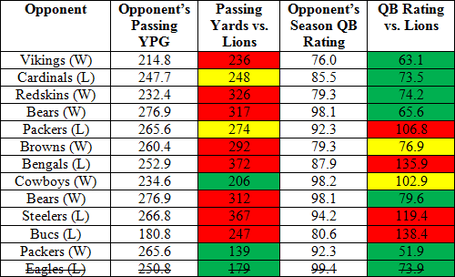 Detroit's defense has had an up-and-down season through the air. After starting the season by holding their first four opponents below passer rating averages, they hit a stretch of seven games in which six opponents met or surpassed those averages. They rebounded by holding the Green Bay Packers in check on Thanksgiving, but last week doesn't count.

Player to watch: Torrey Smith. Smith dominates all Baltimore receivers on the stat sheet. He has over 500 yards more than any other receiver, over 50 more targets than anyone on the team and 11 more receptions of 20+ yards than any other Raven.

Advantage: Draw. Though the Lions haven't been a very reliable pass defense, the Ravens have been a similarly inconsistent passing attack. Flacco has the third-most interceptions in the league (17). In fact, his stats most closely resemble Matt Schaub. They have the exact same yards per attempt (6.64), their touchdown to interception ratios are strikingly similar (Flacco: 18:17, Schaub: 9:10) and their passer ratings are nearly the same (Flacco: 77.0, Schaub: 77.7). My point being, this isn't a very dangerous passing team. 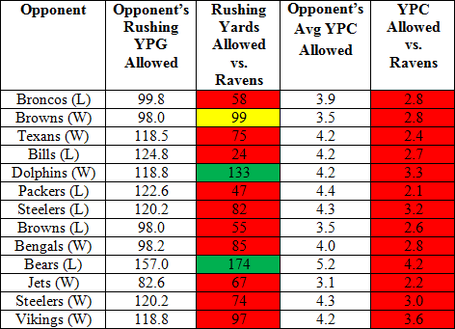 This is one of the worst charts in the history of "On Paper." The Ravens have yet to outgain an opponent's yards per carry average and have only averaged more than 4 yards a carry once this season.

The Ravens are averaging just 3.0 a carry, which is worst in the league. Additionally, they are only gaining first downs on 15.8% of rushes, which also ranks last. They have the second-fewest rushes of 20+ yards (4) and the fourth-fewest rushing touchdowns (6). Any way you spin it, this is a terrible running team. 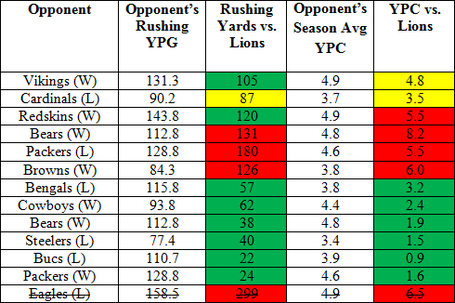 If you pretend that last week didn't happen (try it, it's awesome), then the Lions still have an outstanding run defense on quite a streak. Snowstorm aside, the Lions haven't allowed any sort of success on the ground since Week 6.

Overall, the Lions defense took a bit of a hit last week, but it still remains fairly strong statistically. Though they have fallen to t-13th in yards per carry allowed (4.1), they are still allowing first downs on just 15.9% of rushes (second-best). Again, it is the long plays that kill this defense. They have allowed the sixth-most rushes of 20+ yards (12) and the most rushes of 40+ yards (6). Take half of those away and this is a top-five run defense without a doubt.

Advantage: Lions +2. Matchups don't get much more lopsided than this. If the Lions weren't prone to the long play, I may have given them a rare +3 or +4 advantage. There's a chance that Ray Rice could show flashes of his former self on a play or two, but I'd be absolutely shocked if the Ravens could manage more than 80 yards on the ground this week.

Special teams. Both the Ravens and the Lions scored touchdowns last week through special teams. Jeremy Ross had his breakout game and reached the end zone twice. Meanwhile, Jacoby Jones tallied his first special teams touchdown last week against the Minnesota Vikings. In a closely fought game, don't be surprised if special teams play is the deciding factor.

Ford Field + Monday night. The last time the Lions hosted a Monday Night Football game (not including the Saturday night version against the Atlanta Falcons last year), the city of Detroit rose up and forced the Chicago Bears into nine false-start penalties. The general mood in Detroit is nowhere near as high as it was then, but with first place on the line, the home crowd should be loud.

Even though pretty much everything I said in my preview was irrelevant once 6 inches of snow hit the ground, my prediction of a 31-27 defeat was somewhat close to the 34-20 reality. That moves On Paper's record to 9-4 on the season.

In the comments section, it was londonlion who, once again, emerged as the prophet he secretly is. His near-perfect prediction of 34-21 was his second comment-section victory of the season. Therefore, you get double the prize this week: 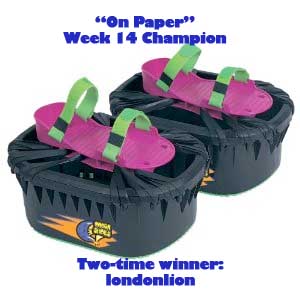 You guys remember Moon Shoes? I'm almost positive these were invented for kids who were either too lazy or too talentless to learn how to pogo stick. Anyway, Moon Shoes are a fabulous prize to bring out the kid in you, but more importantly, to traverse through 6-8 inches of snow with style. Congrats, londonlion.

The Lions end up with a +1.5 advantage. Though most of that advantage comes through their run defense, the Lions still look like the clear superior team. The Ravens do not appear to be a very good offensive team, and while their defense is more than respectable, they aren't particularly prone to forcing turnovers, which has been the Lions' main offensive problem. The Lions will also have the added benefit of an emotional, "blue'd out" crowd. Lions 23, Ravens 17.