What should the Detroit Lions expect from an inconsistent Baltimore Ravens offense on Monday Night Football?

Share All sharing options for: CoachSpeak: The Ravens run game

Sports test one's ability to remain rational and objective. One moment you're enjoying a delightful brunch and consulting win expectancy charts, and the next you're screaming obscenities around a 4-year-old boy whose parents inexplicably brought him to a bar. Football's an emotional game. Because of this fact, I've been following a pattern with these articles. When the Lions win, I look back in glorious hindsight and celebrate those most valiant contributions that led to victory. When the Lions lose, I retreat into a shell of emotional immaturity, refuse to acknowledge the previous game and instead look toward the next opponent. Let it be known that Jeremy Reisman is made of sterner stuff than I am.

With that in mind, let's channel Deion Sanders and go prime time. We're staring down Monday Night Football in Detroit with the division on the line -- pretty hard not to get fired up about that.

The Baltimore Ravens come to town with as much on the line as the Lions, in terms of playoff chances. Lately, the Baltimore running game hasn't been doing much. (That is, aside from their game against the Chicago Bears, but really, who hasn't run all over the Bears' defense?) Those of you who spent a high draft pick on Ray Rice can certainly attest to that (don't worry -- I'm one of you!). Despite the struggles of the Baltimore rushing offense, Jim Schwartz shared some thoughts about how it plays into the Ravens' game plan:

"They came out this year and have done just about everything. They have used their two back sets. They have used pistol. They've used no huddle. They've used a lot of it. (Ray) Rice is averaging I think three yards a carry. (Bernard) Pierce is averaging I think 2.7, but with that being said they still carry it 28 times a game on average. It's really not the yards average that's making a difference for them. They want to control the clock and they want to free up the deep ball and stuff like that. I don't think they're not [sic] getting as many yards as they have in the past, but it's still a very key part of their offense."

Can't disagree with you there, Coach -- their yardage averages are most certainly not making a difference for them. But Schwartz is right in that the Ravens continue to run the ball a lot, despite their limited success. To figure out how they might attack the Lions on Monday night, I looked at what the Ravens ran against the Cincinnati Bengals, another 4-3 defense with a stout defensive line.

Surprisingly (at least to me), the Ravens run a ton of plays out of the shotgun and pistol. Vonta Leach still accounts for some of their two-back sets, but against the Bengals, those sets were used infrequently. The Ravens instead ran a lot of zone against the Cincinnati defensive front. 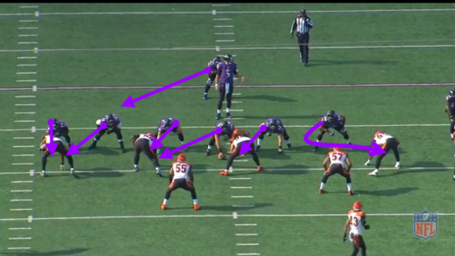 Flacco sits 4 yards behind the center (as opposed to the 5-7 yards that marks the shotgun). The play call here will be an outside zone handoff to the right. 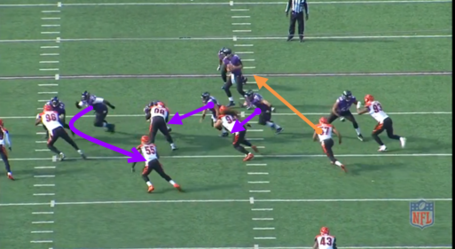 At the snap, all "covered" linemen (those with a defender directly above them or shaded to the play side) will engage with the nearest defender. "Uncovered" linemen will reach to the nearest playside defender. The notable exception here is the left tackle, who tries to stall the aggressive defensive end from getting into the backfield before the play develops. In the zone-blocking scheme, once double-teams are established, one of the offensive linemen will then work upfield to the second level. Once Rice gets to about the playside B gap left of the RG (in the image), he is free to make a cut when he sees a lane. 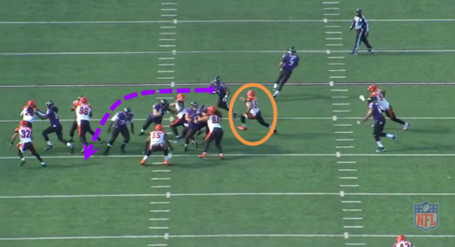 The problem for the Ravens on this play is that the left tackle fails to account for the run-blitzing backside linebacker, who stops the play before Rice can hit the hole, which you can see developing on the left side of the image. 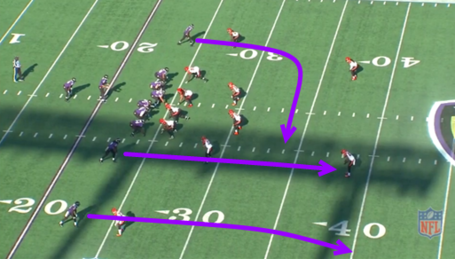 Again, here we're looking at the same formation: Flacco in the pistol, with Rice behind him, and a tight end lined up on the right. The Ravens run a zone-blocking scheme, as they do all the time, only they run it to the weak (left) side of the formation. 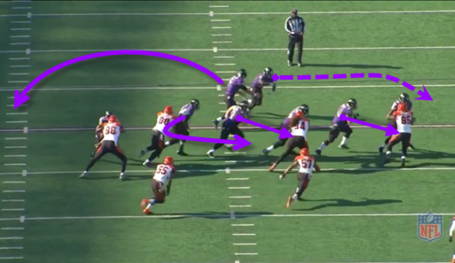 The entire Bengals front -- linebackers, tackles and ends -- flows to the right with the run fake. Take a look back at the second image. Everything is the same. Having diagnosed the blocking scheme, the defenders are moving to destroy it. This is what makes bootlegs generally effective in conjunction with the outside zone, which is exactly what the Ravens do here. 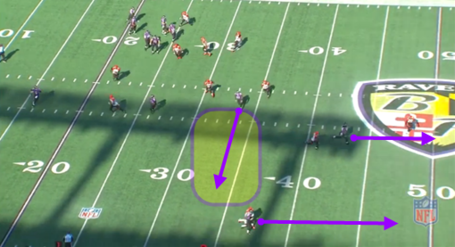 The two WRs away from the run fake run a fade/seam, drawing the defenders away from Torrey Smith, who comes on a drag route across the formation. Flacco delivers it to him for a 20-yard gain.

What's most troubling about the Ravens offense (from an objective standpoint, not as a Lions fan) is that while they clearly commit to running the football, not many of those play calls result in effective play-action. Almost none of their offense is complementary. For example, their most common formation against the Bengals was the shotgun, with one tight end and a single back offset to Flacco's side. It'll look familiar, because the Lions also line up this way all the time. 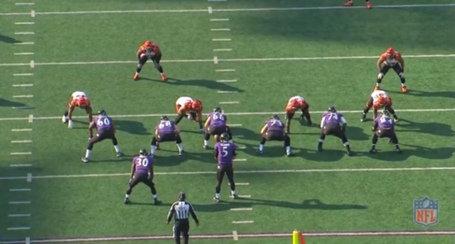 Out of that formation, they used essentially two run plays: the inside zone and the trap. The Ravens also passed a ton out of the same formation, but almost none of those passes came as a result of a run fake -- the offensive line would set in pass protection, and the routes would develop. There's certainly nothing wrong with dropping back and running a pure pass play -- Lord knows the Lions do it all the time. But very few of their offensive formations against Cincinnati showed misdirection or multiple run/pass options. (They did successfully run a flea flicker, so big ups on that one.)

I don't get into the prediction game (aside from the comments section of "On Paper"), but the Ravens' offensive looks seem to play to the strengths of the Lions. They can feel free to run Ray Rice and Bernard Pierce into the teeth of the Lions' defensive line all day, but assuming the run defense holds up, Louis Delmas and Glover Quin should be able to stay in a two-high look the entire day. If Joe Flacco does one thing well, it's throw the long ball, and the Lions defense needs to respect that. If the Lions' front four dominates this matchup, one can reasonably expect the Lions' pass defense to do the same.