This week our film review looks at what is the main culprit in Matthew Stafford's recent struggles: his footwork.

The main talking point on Matthew Stafford has been his inaccuracy and lack of mechanics. The most noticeable (and talked about) flaw is Stafford's side-arm release. While that issue does make his passes more vulnerable to being batted down and, at times, can take away some of his accuracy, the problem really starts and ends with Stafford's footwork.

The biggest issue I see in Stafford's play is his insistence on throwing the ball off-balance, even when there's a clear pocket to step into. 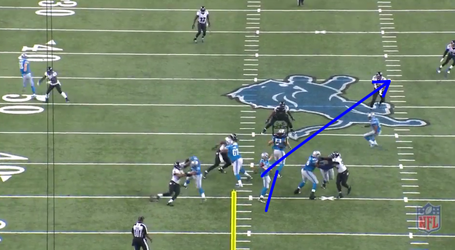 On this third-and-long play in the fourth quarter, you can see Stafford has a pretty clean pocket. Yet, look at his stance. His feet are facing toward the middle of the field, but his arm is swinging toward the sideline.

Let's get a sense of what this footwork does in terms of the release of the football. Stand up. Pick out a target to aim at (you don't have to actually throw anything). Now, as you bring the ball back to throw it, take a big step to the left of your target with your front foot (if you are a lefty, take a step to the right of your target). As you begin to move your arm forward, notice what is happening to your throwing shoulder. It's dipping. This lowering of the shoulder causes you to overcompensate. So what happens then? 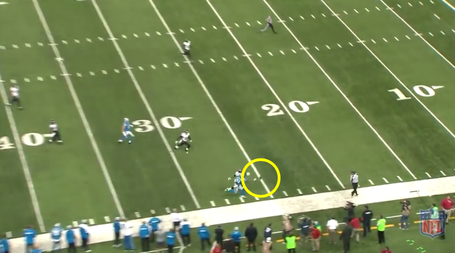 You overthrow your target. 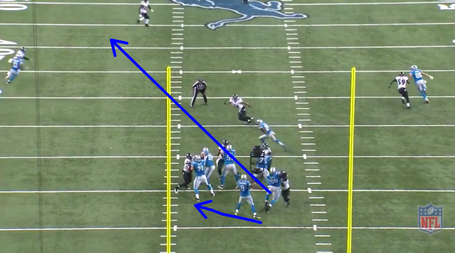 Here it is even more obvious. Stafford has a wide-open stance facing the sideline and tries to slip a pass toward the middle of the field.

Now go back into your stance. Take another big step wide of your target. Notice the dipping of your shoulder. Now swing your arm toward the target. Notice anything interesting about your release point? I bet you're throwing the ball a little side-armed, aren't you? The point being, Stafford's side-armed tendencies aren't a problem with his throwing mechanics, but rather his lazy footwork. Notice above how Stafford again has a clean pocket in front of him to step into and deliver a more accurate throw.

Part of improving footwork is getting better at recognizing pressure in the pocket. Stafford still has a long way to go in this aspect of his game as well: 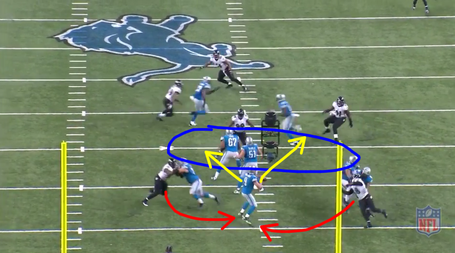 On this third down, the Baltimore Ravens only rushed two linemen. Both defensive players try to beat the tackles around the edge, leaving plenty of room for Stafford in the middle of the pocket. But either Stafford doesn't sense it, or just doesn't bother reacting to it. 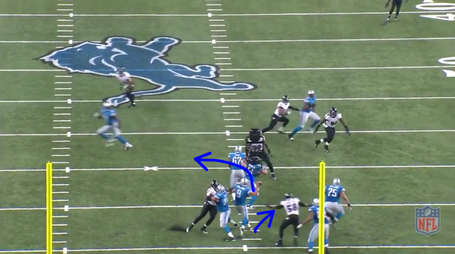 Pressure gets too close to him and Stafford is forced to take a step right while throwing left. This has the opposite effect of his open stances from above and his pass falls two feet in front of Calvin Johnson. Again, you can see all of the field Stafford could have used if he had better pocket presence. He could have easily found more space, giving his receivers more time to get open, and more important, giving himself room to step into his throw and make an accurate pass.

Stafford is not incapable of doing this. In fact, on his only touchdown of the day, Stafford remained incredibly calm and poised in the pocket and delivered a great throw. 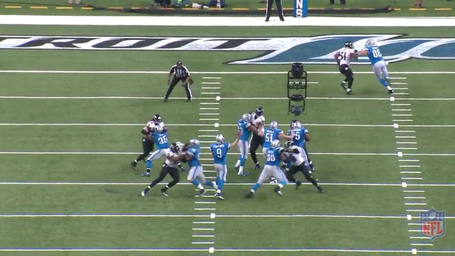 With the pocket collapsing, look at how calm Stafford's body language is. He almost looks nonchalant in his delivery of the ball. But his feet are directed toward the target, he isn't fighting against his own posture and unsurprisingly... 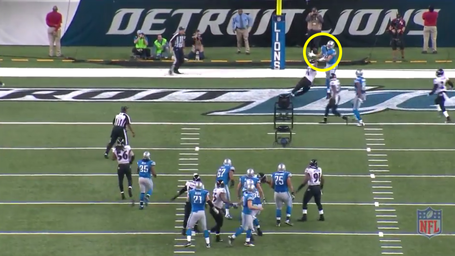 ...he delivers a great pass.

The most concerning thing about these issues is that they are not new. I was complaining about these tendencies of Stafford over two years ago. Whether Stafford's resistance to change is an issue with coaching or with Stafford himself remains to be seen. But when I hear his coaches say something like this...

...I get the feeling I may know where the real problem lies.