Our preview compiles all of the important statistics to see who has the edge between the Detroit Lions and New York Giants.

Share All sharing options for: On Paper: Detroit Lions vs. New York Giants

It's a battle of the sad-sacks this week as the Detroit Lions (7-7) host the New York Giants (5-9). The Lions squandered their best chance at the postseason last week in front of a national audience and now must rely on the kindness of others to back their way into the playoffs. The Giants are officially eliminated from postseason play and are just trying to figure out what went wrong in 2013.

The Lions will be the only team with any real motivation, which could be a huge factor in the game, but are they clearly the more talented team? Let's try and mend our broken charts: 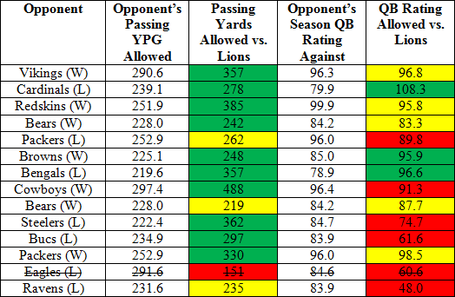 There's no way around it -- the Lions pass offense has been terrible lately. They still haven't significantly outperformed a defense's passer rating allowed average since losing to the Cincinnati Bengals in October.

Their slide in overall stats continues as well. The Lions now rank 18th in passer rating (85.8) after being ranked eighth halfway through the season. They also now rank t-eighth in yards per attempt (7.5) and t-25th in completion percentage (58.0%).

It's a bit strange to see the Lions pass offense be so efficient in terms of yardage per play, yet struggle so badly overall. Turnovers and inaccuracy have absolutely killed this unit, and that falls completely on Matthew Stafford, who has thrown 7 touchdowns and 9 interceptions in the past four weeks. 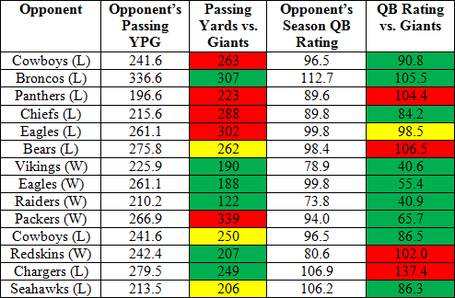 New York struggles to get to the quarterback, tallying only 29 sacks on the season, ranking t-26th overall. However, they can create turnovers regardless, as their 13 interceptions rank right in the middle of the league at t-16th. To summarize, the Giants are an average to slightly above average pass defense.

Player to watch: Antrel Rolle. Rolle leads the team with 6 interceptions and 11 passes defended. With little pressure coming from the front four, look for the Giants to rely on their secondary to make plays.

Advantage: Giants +0.5. The Giants don't have a great defense, but the Lions' pass offense has been the team's weakness lately. Detroit has been awfully mistake-prone in the last half of the season, and it has sunk the entire team. I expect the Lions to turn it over a few times against this Giants defense. 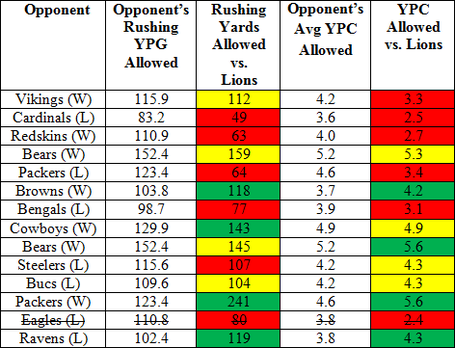 The Lions run offense continues to hum along nicely in the second half of the season. The Lions have averaged well over 4.0 a carry in their past six non-blizzard games, having reached the century mark in all of those games as well. In total, the Lions have met or outgained yards per carry averages of the opponent in seven of their past eight games that weren't played in the middle of the Iditarod course.

Detroit is averaging just 4.1 yards a carry (t-19th), but they are earning first downs on 24.0% of their rushes, which is ninth-best in the league. 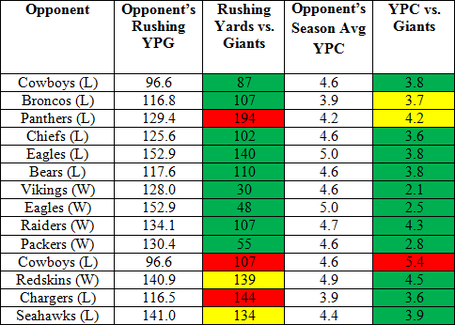 Yikes. That is an awfully good chart for a 5-9 team. Only one opponent has outgained their yards per carry average against the Giants and only three have surpassed their rushing yards average.

The good news is that though New York is holding teams below their averages, they aren't doing it by a wide margin. 10 of their 14 opponents were able to tally over 100 yards rushing on the day. Also, the Giants have forced just 3 fumbles in the running game, which is the second-fewest in the league.

Player to watch: Joseph Fauria. With Brandon Pettigrew out this week, Fauria will likely see more action outside of the red zone. This means the Lions will likely rely on his blocking skills more, which have not been very good this season.

Advantage: Giants +0.5. The Lions are a competent running team for the first time in a while, but the Giants are a very underrated defense, especially when stopping the run. The Lions definitely won't hit 200 yards rushing this week, but 100 yards is very much in reach. They'll have to work for it, though. 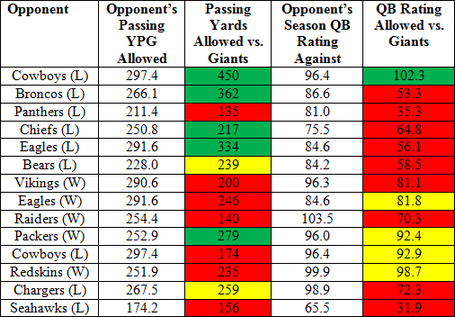 That's more like the 5-9 Giants I know. If you think Stafford has been struggling, look at Eli Manning's chart. He hasn't outgained an opponent's passer rating allowed average since WEEK ONE. That is astonishing from a two-time Super Bowl winner.

The Giants rank 31st in passer rating (69.2), t-16th in yards per attempt (7.0) and t-21st in completion percentage (58.8%). They have the most interceptions (26) and the fifth-fewest passing touchdowns (16). They just aren't very good by any real measure. And they won't be any better with their leading receiver, Victor Cruz, out for the rest of the season. 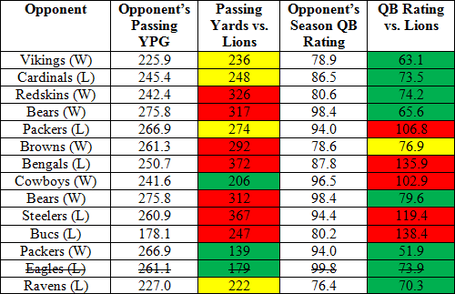 Detroit's pass defense is trying to trend back to average after an extremely rough middle of the season. Overall, they've held eight of 14 opponents below their passer rating average and seven of 14 at or below yardage averages.

Player to watch: Jerrel Jernigan. Never heard of him? Well, Jernigan seemed to step up after Cruz went down last week, hauling in 7 catches on 8 targets for 67 yards. Before that game, Jernigan had only 13 career catches, but he seems to be the next man up for the Giants. Jernigan is actually questionable for the game with a knee injury. If he can't go, look out for Ben Bennigans or Flem Flemmings.

Advantage: Lions +0.5. Detroit has been surprisingly okay against the pass for the last three weeks (okay, two non-blizzard weeks). They should be getting Chris Houston back, though they may lose Rashean Mathis to the flu. Regardless, Manning has been a turnover machine lately, throwing 10 picks in his last five games. I expect him to throw at least one more on Sunday. 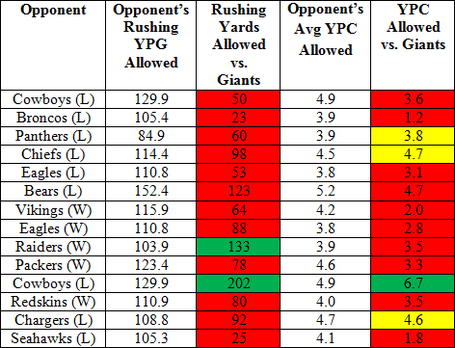 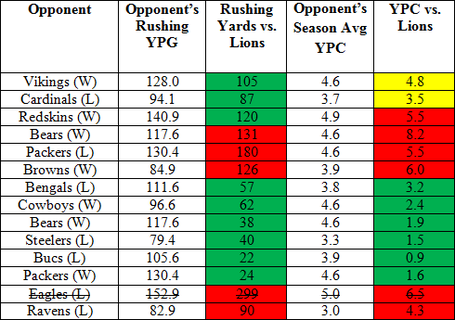 The Lions run defense has cooled down a bit after having a scary-good November. Still, they've held eight of 14 opponents at or below yards per carry averages and nine of 14 below yardage averages.

Advantage: Lions +2. On top of the Lions' heavy statistical advantage, the Giants are also ailing on the offensive line. Detroit may be missing DeAndre Levy, but I don't think that will matter much in this matchup. Detroit's only issue with stopping the run has been giving up big plays, and New York has the fewest big plays in the league.

Motivation. The Giants are coming into this game beat up and without any real motivation to win. The Lions need to win out to even give themselves a chance to reach the playoffs.

"On Paper" predicted a low-scoring victory for the Lions on Monday night, 23-17. I got the first part right, but unfortunately, it was the Baltimore Ravens that came out on top, 18-16. I am now 9-5 on the season.

In the comments section, Ronbomb came out on top with his impressive 20-19 prediction. Here is your prize, Ronbomb: 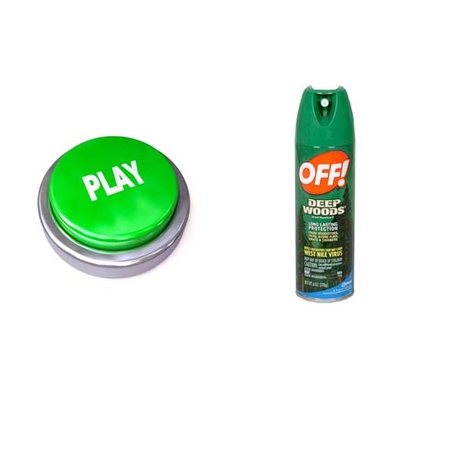 You get a play button and a can of Off!, because I fear that is as close to the playoffs as any of us will get. Congrats. :(

The Lions come out with a +1.5 advantage. The interesting thing about this game is that the defenses have the advantage in every single matchup. That means we're likely to see an ugly game lacking in points with a lot of turnovers. The team that goes the longest without committing a turnover will likely come out on top. That's probably a bad sign for the Lions, but they should still come out on top on Sunday, temporarily keeping their postseason hopes alive. Lions 20, Giants 16.