Share All sharing options for: On Paper: Detroit Lions at Minnesota Vikings

We have mercifully reached the season finale after a treacherous (winless) December. If you are reading this, that means you are one of the few survivors. And for that, I congratulate you. As for me, I somehow managed to survive the cold, wintery December on mere scraps of optimism (thank you, DeAndre Levy and Joique Bell).

Since you've all managed to make it this far, let us have one final feast of charts before we enter the fruitless nine months that lay ahead. 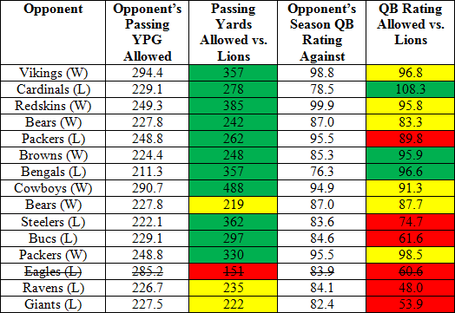 If you want to know what went wrong this season, look no further than this chart. The Lions have lost five of their past six games, and in each of those games, Matthew Stafford failed to surpass the opponent's passer rating allowed average. Prior to those games, Stafford had only failed to reach those averages once.

Stafford's play crudely dropped off right around the Cowboys game, and the results have not been pretty. He's thrown 19 interceptions, which is fourth-most in the league, and his completion percentage dropped from 63.8% through five weeks to 58.1% on the season. It has been a terrible turn of events, and it has been the main reason for the Lions' failures. 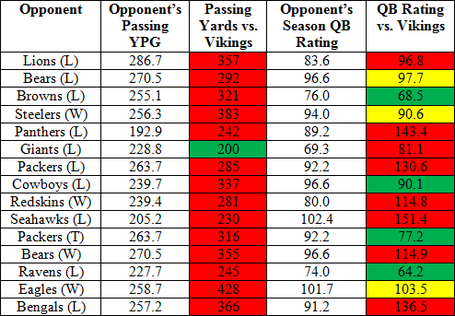 It's pretty easy to see why the Vikings have the worst-ranked pass defense in the league. They've held only one team below their yardage averages this season and only four below their passer rating averages. In 11 of 15 games, the opposing quarterback finished with a passer rating of 90 or higher.

Player to watch: Jared Allen. Allen always seems to be a force in games against the Lions. Overall, Allen leads the team with 9.5 sacks, and he has 5 passes defended to boot. I'll bet you a dollar he bats down at least one pass on Sunday.*

Advantage: Lions +0.5. Despite their terrible streak of play, the Lions should have the advantage in this matchup. However, they will likely be without Calvin Johnson, and Brandon Pettigrew is out for the year. Without two of their biggest weapons and with Stafford playing some of his worst football, there isn't much room for optimism, but the Vikings are still very bad. 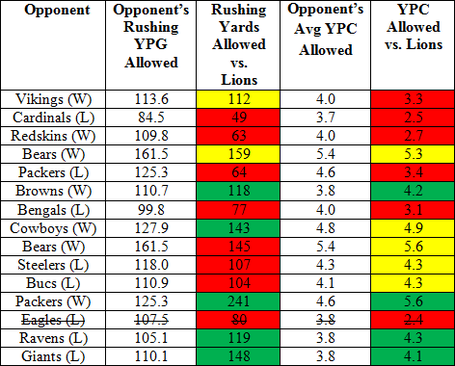 Detroit has had a fairly efficient running game all season. Though the numbers aren't gaudy, they've hung around opponents' averages all year. They've only failed to reach yards per carry averages once in the past eight weeks.

The Lions rank t-18th in yards per carry average (4.1) and eighth in percentage of rushes resulting in first downs (24.1%). One interesting finding is that despite the addition of Reggie Bush this season, the Lions still haven't had a lot of explosive plays. They only have 8 rushes of 20+ yards (t-19th) and no rushes of 40+ yards. 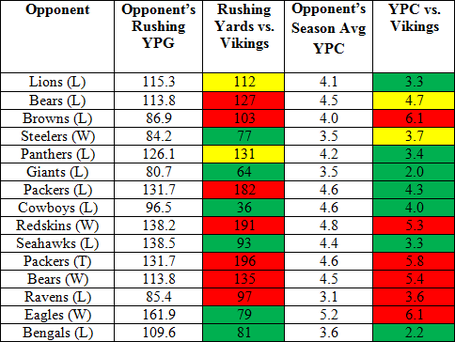 Player to watch: Erin Henderson. While Chad Greenway gets a lot of the publicity, Henderson has been quietly having a great season. He ranks second on the team with 105 tackles, and he has 10 tackles for loss, which is twice as much as anyone else on the team.

Advantage: Draw. The last time the two teams met, the Lions were very close to their averages, totaling 112 yards at 3.3 a carry. Detroit has slowly improved on the ground since then, and I think it's fair to assume that they'll reach similar numbers this week. 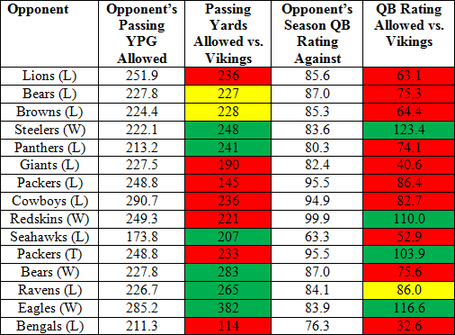 Christian Ponder has failed to emerge as the Vikings' franchise quarterback. Minnesota, as a team, has only surpassed passer rating averages in four of 15 games and yardage averages in six of 15.

Ponder himself is averaging a 77.9 passer rating, only has 7 touchdowns on the season and has 9 interceptions. Lately, Matt Cassel has stepped in as the Vikings' quarterback, and he hasn't done much better. Cassel has an 86.0 passer rating on the season and a 10:8 touchdown to interception ratio. Reportedly, it is Cassel who will give it a go on Sunday. 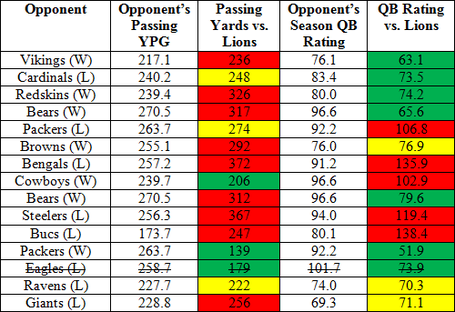 Detroit has been a mixed bag all season defending the pass. Though only five of 15 opponents significantly outgained their passer rating average against the Lions, nine of 15 outgained their yardage average.

Surprisingly, the Lions pass defense seems to be average or slightly below average overall. Despite a rag-tag gang of cornerbacks, Detroit has managed to keep its head above water on defense.

Player to watch: Cordarrelle Patterson. In the first matchup between these two teams, it was Patterson's first game, and he was a non-factor. Since then, Patterson has emerged as an explosive threat. His speed and elusiveness are just the things that could give the Lions problems on defense.

Advantage: Lions +0.5. This season, I think the Lions' pass defense has been given a bit of a bad rap. While they haven't been outstanding, they've been closer to average than most give them credit for. The Vikings are decisively below average. They've been slightly better with Cassel lately, but it's pretty clear they aren't a huge threat. 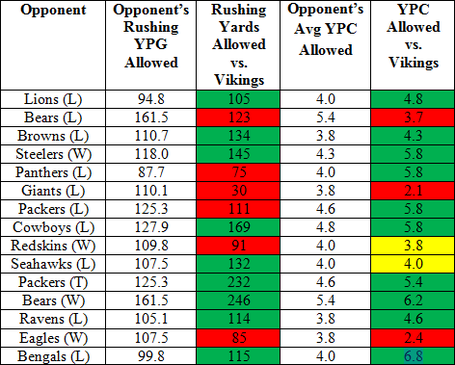 Minnesota ranks t-third in yards per carry (4.7) and sixth in percentage of rushes for first downs (24.8%). They also have 4 more rushing touchdowns than any other team in the league (22).

Adrian Peterson is doubtful to play this week, as he's been battling foot and groin injuries and there's no real reason for him to play. However, he has practiced in a limited fashion this week, so he may still give it a go. 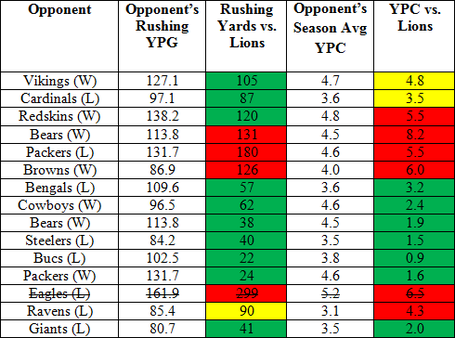 The Lions seem to have rebounded in defending the run after the disaster against the Eagles. They've held seven of 15 opponents below yards per carry averages and 10 of 15 below rushing yard averages.

Player to watch: Matt Asiata. If Peterson can't go (and with Toby Gerhart already ruled out), Asiata will get his second career start. Asiata averaged only 1.7 a carry in his only game this season, but he did score 3 touchdowns.

Advantage: Lions +1. In the past matchup, the Lions absolutely shut down Peterson... except for his first carry of the season, a 78-yard touchdown run. The Vikings won't be able to run consistently with Peterson on the bench, but I wouldn't be surprised to see a big run out of Patterson.

Motivation? Neither team has much motivation to get the win this week, but Minnesota may have the edge. It will be the last game ever played in the Metrodome and they may want to send their fans out with a win to remember.

On Paper suffered another loss last week, predicting a 20-16 victory over the Giants. On Paper now sits a disappointing 9-6 on the season.

In the comments section, Twon82 almost hit the bulls-eye, predicting a 24-20 defeat (actual score was 23-20). However, I'd also like to recognize Singledigit, who predicted a 20-20 tie, giving himself almost no chance of being the winner this week. However, the Lions and Giants headed into overtime tied 20-20, so that turned out to be quite an impressive prediction... but still not our winner.

Congrats, Twon82. Enjoy these 2013-14 Detroit Lions playoff tickets. May the heat of this burning paper keep you warm this winter season!

Predicting a game like this is an exercise in futility. The Lions are the better team on paper, but by just a +2.0 advantage. But with players on both sides now planning for the offseason, there's no knowing what is really going to happen on Sunday. Because this preview is supposed to be a display of objectivity and because I'm a slave to the charts, I will go with the Lions. As always, it has been a pleasure writing previews for you all this season, and although I wish I could be preparing for another column next week right now, it has been a fun and interesting year. Lions 23, Vikings 19.