Avoiding the crippling depression of the present and thinking about the Detroit Lions' coverages.

My brothers and I exchange Lions-related gifts every Christmas. The practice has become something of a tradition because all three of us are devoted fans of the Honolulu Blue, and none of us want to spend excessive time thinking of gift ideas for each other. As fate would have it, our gift exchange took place late last Sunday night. This led to a repeated sequence of events in the Tomke household:

3.       Notice the looks in parents' eyes; consider not ruining Christmas.

Feel free to share your favorite Lions holiday tragedy below!

There's so much to talk about after Sunday, all of it involving Jim Schwartz. But honestly, I'm not sure I have the emotional capital to spend on a discussion of Schwartz's self-righteous ire toward the fans at the end of regulation. Or his admission of wrongdoing, which was really just another thinly-veiled shot at the fans. (Thanks for being the bigger man in the first half, Coach!) Or the notion that all the team needed to go for it in that situation was to bust a trap with their third-string running back. Or Schwartz's delusional comments about this season not constituting a "failure."

At some point, we're just piling on the condemned, and Sean already summed up the situation nicely. With that in mind, I'd like to take a look at something that justifiably flew under the radar during last week's game. After Bill Bentley was nearly decapitated by Louis Delmas in the second quarter, Chris Greenwood saw his first significant action at cornerback for the Lions. For what it's worth (i.e., very little), Greenwood seemed to handle himself well in the situation. However, Greenwood's play wasn't all that was noteworthy. The entire secondary changed upon his insertion into the defense, according to Schwartz.

"I think that Jonte (Green) and Chris (Greenwood) did a pretty good job in that game. I don't think there were any negatives...After that first series, we changed our coverage scheme because of some of the matchups and after Bill Bentley got hurt, we changed some of our scheme also, and those guys did a good job."

Early in the game, particularly with Bentley in the lineup, the Lions' defense ran plenty of zone coverage against the New York Giants. Eli Manning obviously didn't shred the Lions' secondary in the first half, but he did make some plays. Slightly more troubling in that regard are the plays he left on the field, particularly against a specific coverage. 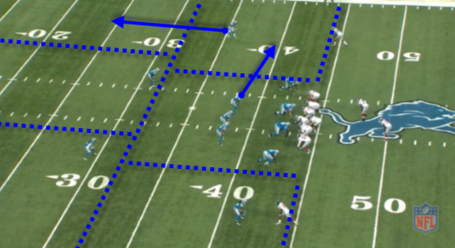 The Giants were facing a first-and-10 in the first quarter, and the Lions showed a sort of rolled cover-3 look. Bentley (the CB at the top of the image) lines up 9 yards off the line of scrimmage, while Jonte Green (the bottom CB) is far closer. The Lions' safeties shade toward the bottom. Bentley and the safeties are each responsible for a deep third of the field, while Green covers the flats on his side. Ashlee Palmer will trickle out to the flats on Bentley's side in coverage, as well. 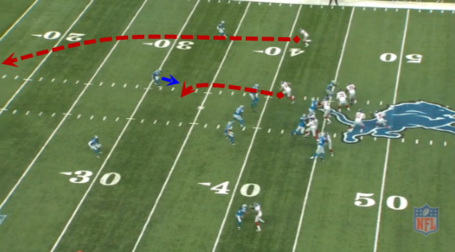 The tight end on Bentley's side runs down the seam to sit in a soft spot about 11 yards downfield. This route freezes Glover Quin (the middle safety) for a second, allowing the top wide receiver to get some space on a deep post route. 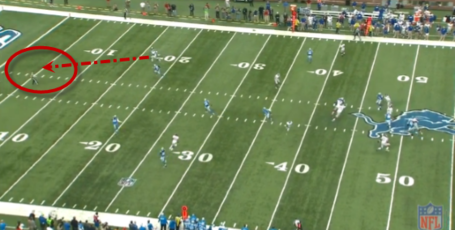 Later in the half, the Giants once again produced an open man downfield against this coverage. For the Lions, the roles were reversed, with Bentley getting completely turned around on a double-move and Quin bailing him out.

Of course, not long after that, Delmas altered the defensive lineup with one diving blow. Enter Chris Greenwood.

From that point, the Lions ended up showing a good deal more man coverage with their cornerbacks, and a lot of that was related to Greenwood. First, since Greenwood has spent some time away from the Lions this season, he may not have known some of the more intricate coverage calls in the secondary. Supporting this assumption is Greenwood's first play from scrimmage, in which he appears to get confused by some pre-snap motion in the offense, only to blow up the play for no gain anyway.

Second, Greenwood's general body type lends itself well to press man coverage. At 6'1, 193 pounds, he is the largest CB on the Lions' roster, just ahead of the injured Darius Slay. With Greenwood in the lineup, the pre-snap alignment for the cornerbacks more often looked like this: 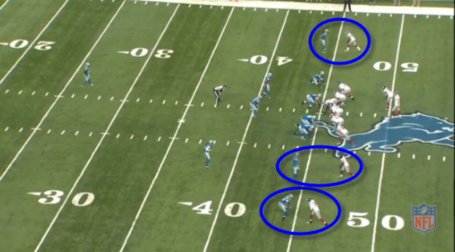 Late in the game, the Lions are in a nickel situation, with all three cornerbacks running straight man coverage from the line of scrimmage. Of course, the situation warrants this; a field goal puts the Giants ahead late, so a moderate gain is nearly as crippling as a touchdown here.

However, this play stands out to me specifically because of how much Greenwood manhandles his assignment. 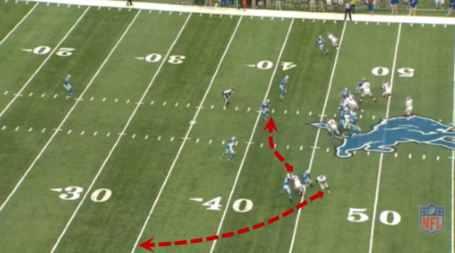 The Giants run crossing routes with their bottom two WRs here in an attempt to pick Don Carey off his man. Greenwood nearly helps them in this regard, as he damn near pushes his WR backward for the first 5 yards. 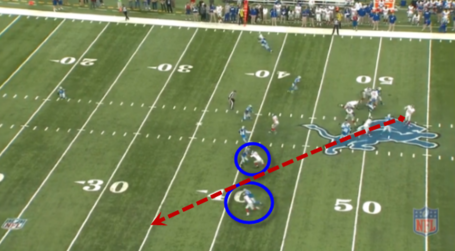 Carey, to his credit, avoids being thrown off course, and Manning's pass falls incomplete.

When facing more man coverage in the second half, the Giants' passing attack came up short, allowing the Lions to get back into the game. I'm not about to jump on the Chris Greenwood bandwagon here. He may very well not be on the roster next season, given the pending coaching changes. But the presence of cornerbacks who can jam and cover man-to-man is something that fits well with the Lions' defense.

All season, teams attempted to use quick-strike passes that took advantage of soft defensive alignments, and they did this to marginalize the pressure by the Lions' front four. Those quick-strike throws become noticeably more difficult when a corner can disrupt the route and buy those precious few seconds necessary for Ndamukong Suh, Nick Fairley and co. to get to the quarterback.

Of course, man coverage isn't the great panacea, and nor should (or will) the Lions start running it all the time. With this being the NFL, any defense that repeatedly shows the same coverage will get exploited. But with roster changes on the horizon, and the NFL Draft once again the next thing to look forward to (sigh), the Lions would do well to address their ongoing need for a physical cornerback. It just makes too much sense.

That about wraps it up for me, and for CoachSpeak. To those of you who read and those of you who commented: thanks a ton. I had a great time writing, even if we didn't have a great time watching these past couple months. But soon enough, as I do every year, I'll be refilling that Kool-Aid pitcher. Gridiron Heroes.