Our statistical preview breaks down one of the better matchups this week: the Detroit Lions at the Philadelphia Eagles.

Share All sharing options for: On Paper: Detroit Lions at Philadelphia Eagles

As the season winds down and the playoff race heats up, the Detroit Lions (7-5) find themselves in prime position to take one step closer to a division title. In their way are the streaking Philadelphia Eagles (7-5), which have won six of the last eight and stand atop their own division. So which team will take a huge step closer to clinching a playoff spot? T'is the season for charts: 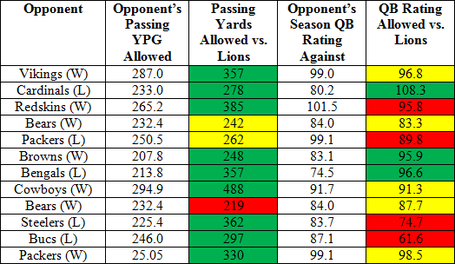 Detroit remains averagely efficient passing the ball, while putting up a ton of yards. Though they've outgained opponent averages in yardage in nine of 12 games, they've only outgained passer rating averages in three.

The Lions rank 10th in passer rating (89.6), seventh in yards per attempt (7.7) and 22nd in completion percentage (59.2%). The biggest issue with the passing offense is interceptions (14, eighth-most) and drops (most in the league, according to sportingcharts.com).

After an impressive start to the season, Matthew Stafford has slipped a bit in his productivity. Through seven games, his touchdown-to-interception ratio was 15:4. In the past five games, it has been 12:10. 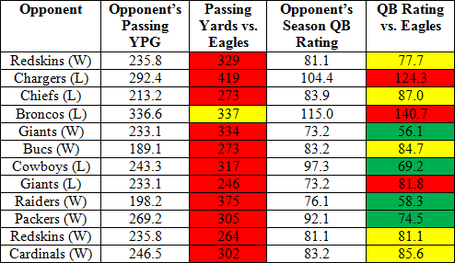 Philadelphia's 32nd ranking is a bit misleading. Though they have allowed every opponent to outgain their average passing yard total, they have held well over half of their opponents at or below passer rating averages. Usually, when we see something like this, it means that they are thrown against at a higher rate than most teams. Indeed, the Eagles have seen 525 passing attempts come their way, 30 more than any other team in the league.

Overall, Philadelphia's pass defense is much more average than their poor rating suggests.

Player to watch: Calvin Johnson. The Eagles have faced two receivers that can somewhat compare to Calvin: Dez Bryant and Larry Fitzgerald. Bryant put up 8 catches and 110 yards, while Fitzgerald tallied 72 yards and a touchdown. Calvin will get his.

Advantage: Lions +1. The Lions are not as good as their ranking suggests, and the Eagles aren't as bad as theirs suggests. Still, the Lions should be able to move down the field with relative ease, especially considering Philadelphia's weak point in its defense is the secondary. If Stafford takes better care of the ball than he has lately, the Lions have a good chance to dominate this matchup. 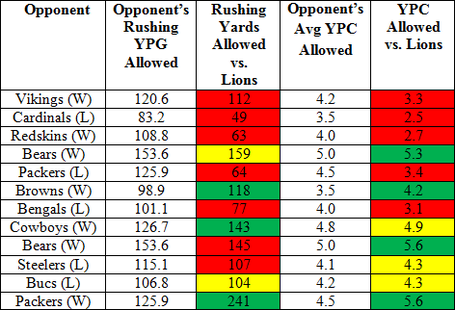 The Lions had their breakout day last week against the Green Bay Packers, nearly doubling their season high in rushing yards. Overall, they have met or surpassed yardage averages in five of 12 games and yards per carry averages in seven of 12. But they've been considerably better as of late.

The Lions rank t-13th in yards per carry (4.2) and second in first down conversion percentage (25.2%). I think it's fair to finally call the Detroit running game an above-average, efficient unit.

The burning question this week is Reggie Bush's availability. Bush finally practiced on Friday after being held out the previous two days. I find it unlikely he'll stay out, but if he does, prepare for a lot of Joique Bell (which isn't a bad thing). 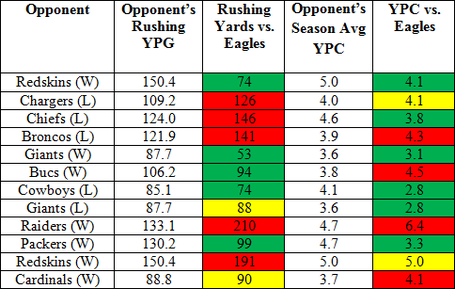 The Philly run defense has been all over the place this season. They've held five teams below yardage averages, five teams above averages and two at averages. They've been a little better at yards per carry, holding six of 12 opponents below averages.

Player to watch: DeMeco Ryans. Ryans is a threat all over the Philly defense. He leads the team with 105 total tackles, including 4 for a loss. In addition, he also has 3 sacks and 2 interceptions. You're going to hear his name a lot on Sunday.

Advantage: Lions +0.5. Though neither team is dominant in this matchup, it's clear the Lions have an edge here. Even without Reggie in the game, the Lions have a pretty good shot at hitting the century mark. With Bush, the Lions could have another big game. 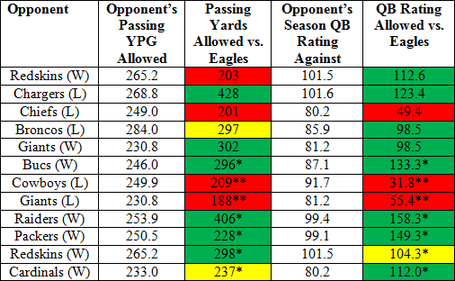 *Games in which Nick Foles started and finished

**Should be disregarded due to excessive Matt Barkley

Nick Foles has been absolutely dominant in the 2013 season. His only real blemish this season was his game against Dallas, in which he went 11 for 29 for 80 yards and no touchdowns. Outside of that, Foles has posted a passer rating of 100 or more in every game.

Overall, Philadelphia's pass offense sports some gaudy numbers. They rank fifth in passer rating (100.8), t-second in yards per attempt (8.6) and 18th in completion percentage (59.8%). Here's a not-so-fun stat: the Eagles have nine more plays of 20+ yards than the Lions despite attempting almost 120 fewer passes. In fact, Philly ranks first in both plays of 20 and 40+ yards. 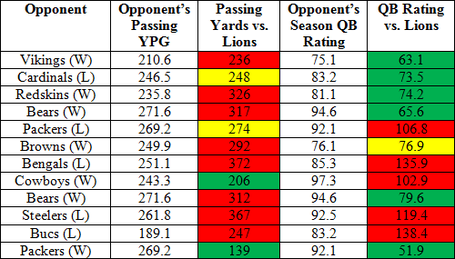 Despite missing their No. 1 cornerback last week, the Lions rebounded nicely after a couple of rough outings. Overall, however, the Lions are allowing teams to outgain their yardage and passer rating averages on a regular basis.

Overall, I think the Lions pass defense isn't quite as bad as many were giving them credit for after the Buccaneers game, but it's clear they are also slightly below average.

Player to watch: DeSean Jackson. Jackson ranks seventh overall in receiving yards, but where he's really dangerous is the long play. His 20 plays of 20+ yards ranks second in the NFL. Given that the Lions like to give up at least one big play per game, Jackson is the most likely candidate to burn the Detroit secondary.

Advantage: Eagles +1.5. Philadelphia has one of the best passing attacks in the league, especially with Foles tearing up the NFL like he has. The Lions had a promising game last week, but there's a chance they'll be without Darius Slay, who had his best game on Thanksgiving. They'll likely have Chris Houston back after missing a week, however. The Lions' best chance at winning this matchup is to get pressure on Foles. Philly has been sacked 35 times this year, which is tied for eighth-most in the league. 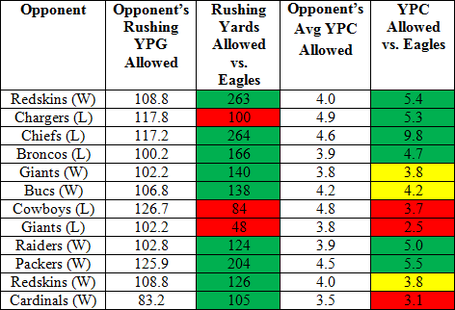 This will be the most fun matchup between the two teams. The Eagles have surpassed the defense's yardage averages in nine of 12 games and yards per carry averages in six of 12.

Led by LeSean McCoy, the second-leading rusher in the league, the Eagles are averaging 4.7 a carry (t-third) and are gaining first downs on 24.8% of rushes (t-fifth). 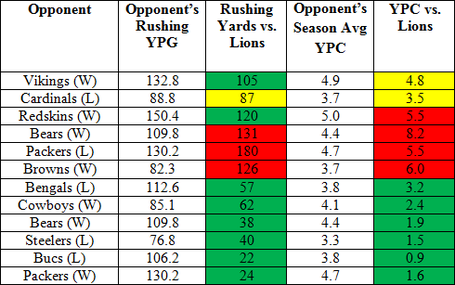 But Detroit will answer with a highly impressive run defense. They have absolutely dominated their last six opponents, and the last three haven't totaled 100 yards cumulatively. In fact, no one has averaged 2 yards a carry against the Detroit defense since October.

Detroit is only allowing 3.7 a carry overall (t-third), and opponents are earning a first down on just 13.8% of carries (first). To have these kind of stats despite allowing four carries of 40+ yards (t-second most) is pretty astonishing.

Player to watch: McCoy. McCoy will be the best back the Lions have faced since Adrian Peterson. While they were able to hold Peterson in check for most of the game, McCoy will present an equally tough challenge.

Advantage: Push. I have a hard time giving either team an advantage here. Both squads are playing at amazingly high levels right now. This is going to be a key matchup, but neither team appears to be statistically superior to the other.

Winter wonderland. The forecast for Philadelphia on Sunday is currently about 31 degrees with snow and rain likely. The Lions didn't fare too well in the rainy environment of Pittsburgh. This will also be the worst weather Philadelphia has dealt with all season, so it remains to be seen how they'll react.

Last week, "On Paper" predicted a modest 31-24 victory. Apparently, I gave the Aaron Rodgers-less Packers too much credit, as the Lions dominated Green Bay, 40-10. A lot of people in the comments section saw a blowout coming, with our two best predictions coming from Enor and seabeeruss, who predicted 38-13 and 44-14, respectively. Congrats! You two get to share this week's prize: 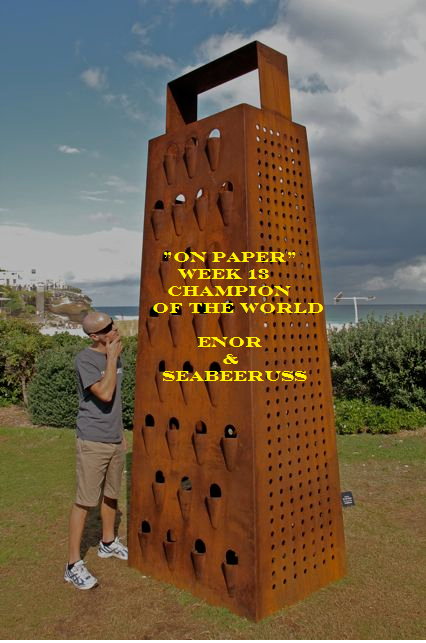 Enjoy the largest cheese grater in the world!

The charts definitively declare a draw. The Lions have an advantage in two matchups, while the Eagles have the edge in just one. The Eagles have a chance to have a big day through the air, while Detroit's recent turnover problem could sink them in Philly. In order to remain impartial, I must go with the tiebreaker I have been using all season: home-field advantage. Eagles 31, Lions 27.