A glance at how the Detroit Lions use the respective skill sets of their two excellent running backs.

When you hang 40 points on a division opponent during a nationally televised game, people tend to give you some love. Right now, no one on the Lions' roster (aside from possibly the defensive line) is getting more love than Reggie Bush and Joique Bell, who are now contenders for the unofficial title of best 1-2 RB combo in the league. Putting up 310 yards of combined offense will do that for you. Even Peter King is on the bandwagon!

Jim Schwartz isn't here to play the ranking game and advises that we all pump the brakes a little:

"We got the running backs that are leading the NFC North and running backs that are 7-5. In my mind those are the stats that really count right now. Not how many yards we are rushing for or who is getting them or anything else. I think both of those guys complement each other well. We have good plans for both of them. Both of them have made a lot of plays and have scored touchdowns for us this year. As far as ranking them against everybody else and everything else, we can't do that. We can only be who we are."

I actually tried to look up the leading running backs according to win/loss record, but strangely, NFL.com doesn't let visitors sort by that metric. If it did, we'd confirm what we already know -- Derrick Coleman is one of the best running backs in the league and Adrian Peterson is one of the worst. Coach Schwartz is really elevating his press conference game down the stretch.

I could talk about the inanity of Schwartz's comments for a long time, but the second half of that quote is what I'd really like to focus on. Bush and Bell absolutely complement each other on the field, and the ways in which the Lions use them provide evidence of that. I'd call them a real "thunder and lightning" pairing, but that's a tired and worn-out nickname for RB duos, so please feel free to leave suggestions for a better one. (Both of their last names are nouns? Maybe there's something there.)

Looking back to Thanksgiving, the Lions ran a couple plays to incredible effect against the Green Bay Packers defense. Granted, the Lions seemed to run just about anything they wanted to incredible effect, but there are two specific examples I'd like to illustrate to show how the Lions employ the relative strengths of their top two running backs. Let's start with Bush.

A lot of Bush's rushing success this season has come off counter plays. As a result, the Lions run a lot of counters when Bush is in the backfield. 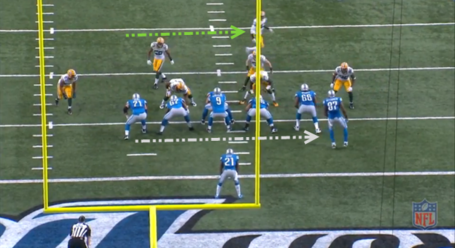 Here, the Lions are backed up on their own 5-yard line, facing a first-and-15 early in the contest. They're also facing a six-man box, which is just asking to be run against. The Lions motion Brandon Pettigrew across the formation to the right side, drawing the safety across the formation with him. 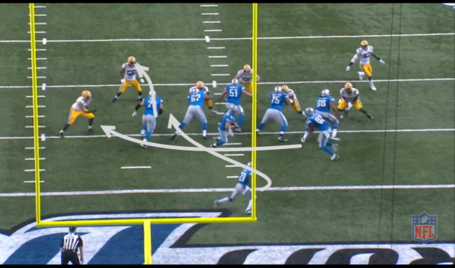 At the snap, Bush takes his first two steps to the right and the entire defense flows with him. That first step allows Dominic Raiola to get easy inside position on the right (on the image) inside linebacker. Bush changes direction better than probably any running back in the NFL, and drawing the defense away from the aiming point (left of Rob Sims) effectively gives him a head start. Pettigrew comes back across the formation to trap the outside linebacker, while Riley Reiff works upfield to the playside middle linebacker. 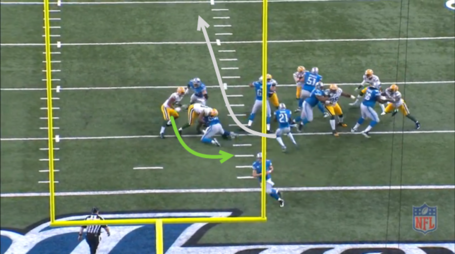 The entire defense gets washed down to the right thanks to Bush's counter step. Pettigrew buries his block, while Reiff pretty much lets his assignment take a wide lane to the backfield, effectively removing himself from the play. Sims seals off the 1-technique to the right, and Bush is off for a 13-yard gain, aided in part by an excellent block off screen by Nate Burleson.

The counter worked all day for the Lions, even when the playside blocks weren't there. More than anything, this is a testament to how well the Lions' interior offensive linemen played. 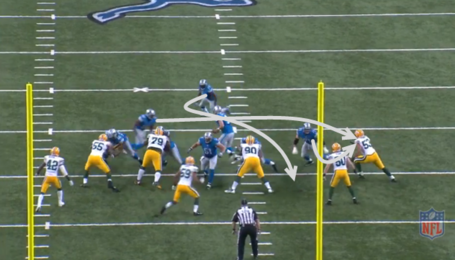 Here we're seeing the same play, out of the same formation. Pettigrew has motioned across the formation pre-snap, bringing the safety (42) along with him. At the snap, Bush takes his counter step while Pettigrew comes across for the trap. Something strange happens along the way, though. Reiff starts to move upfield toward the playside middle linebacker, but as the OLB (Pettigrew's assignment) crashes down on the line of scrimmage, Reiff slows and tries to get a hand on him, leading to an awkward double-team and no one blocking A.J. Hawk. 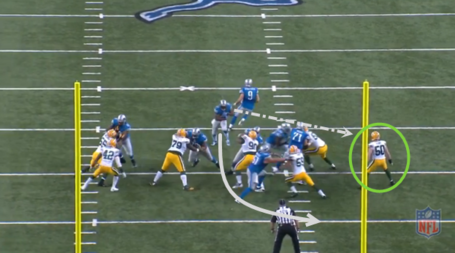 Bush recognizes the situation as he takes the handoff, and the free linebacker never becomes an issue, because Sims, Raiola, Larry Warford and LaAdrian Waddle are doing work. Bush cuts through the open hole up the center of the field and simply delays going to Hawk's side until he's far past the line of scrimmage. 23 yards later, the Lions are on the goal line, where Bush scores an easy touchdown on -- what else? -- another counter.

The Lions don't use Bell on a lot of counter plays, because that's obviously not what suits his style. You want Bush in the open field, because he's fast enough to separate from defenders in space. Bell isn't. What he does exceptionally well is carry the ball through contact, so a lot of his success comes in situations in which he gets enough of a crease inside to shed arm tackles from half-blocked defenders. 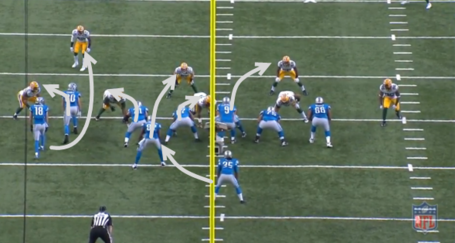 Like on Bush's counters, the Lions motion Pettigrew before the snap. He shifts both ways across the formation before lining up as an H-Back. Joseph Fauria is lined up as the flex tight end on the outside, which forces the Packers to widen the alignment of the outside linebacker. The play call, as best as I can describe it, is a lead behind Pettigrew. The aiming point, as it was on Bush's counter, is left of Sims. But while the location stays the same, the way in which the Lions attack it varies with Bell in the backfield. (Diagrammed above.) 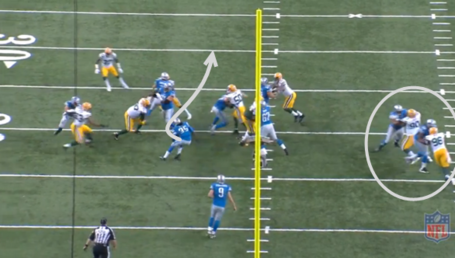 Reiff again doesn't get a great block, but he turns his man inside enough to let Bell cut straight upfield behind Pettigrew, who seals off Hawk to the inside. Raiola, as he did all game, owns the other inside linebacker. Bell takes the ball up the field for a first down.

Probably the most impressive part about this play is what happens on the backside, though. The play is supposed to hit just outside the left guard, yet Warford and Waddle have blocked their assignments damn near outside the right hash. Those two Packers might as well be in the first row, given the complete lack of impact they had on this play. That excellent backside blocking came into play later in the game. 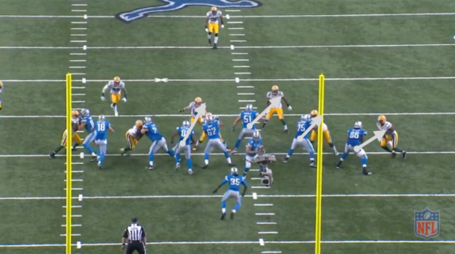 Again, we have a lead behind Pettigrew to the left of the guard, blocked the same way. The only difference on this play is that for once, Hawk blows up Pettigrew coming into the hole, effectively taking out the aiming point for the play. Once again, the backside blocking rendered the point moot. 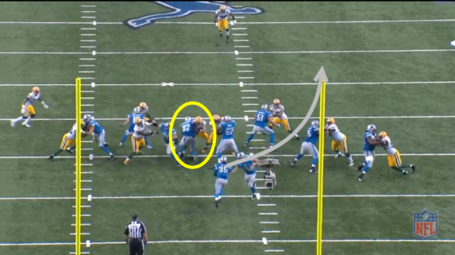 Raiola, Warford and Waddle again seal their defenders outside. So when Bell sees Pettigrew beat ahead of him, he just cuts toward the very obvious hole on the backside of the play for 8 yards. A faster runner probably picks up more, but it's an excellent play by Bell nonetheless.

The conversation about running back tandems is great for mid-week debate, but separating the running backs from their blockers is nearly impossible. Last Thursday, everything worked just about as well as it possibly could. There's a real danger in making judgments after such a singularly impressive outing. The Lions' running game is the best it's been in some time, but it can't possibly be as good as it looked against Green Bay.

On the flip side, a dominant performance is a dominant performance. You don't just luck into mauling the opposition at the line, and the Lions' run blocking was ludicrously effective against the Packers, with the offensive line combining for a +12.3 grade on Pro Football Focus. The only area of concern -- or just added attention -- is Reiff, who hasn't been showing out as much as his linemates the past two or three weeks. Keep an eye on that moving forward.