Lions-Eagles weather: Snow could be a factor in Philadelphia

Snow could be a factor in Philly for Sunday's game between the Detroit Lions and Philadelphia Eagles.

Share All sharing options for: Lions-Eagles weather: Snow could be a factor in Philadelphia

Throughout the week, there was talk that it could snow on Sunday in Philadelphia for the matchup between the Detroit Lions and Philadelphia Eagles. It wasn't necessarily believed that it would snow a ton during the game, but Sunday has arrived and so has the snow:

The snow doesn't appear to be showing any signs of letting up, by the way. Weather.com suggests it will continue to snow throughout the day, and there's currently a winter weather advisory in Philly. What's more, the radar doesn't exactly look very promising right now: 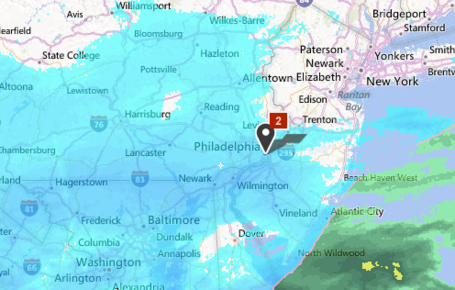 Last season, the Lions played in the snow at Lambeau Field for a night game against the Green Bay Packers. The Lions ended up losing by a score of 27-20, but the offense was still able to function. I actually have a feeling that the weather will favor the offenses in Philadelphia, but it remains to be seen just how the snow will affect Sunday's game.