It's February, which must mean one thing: it's time for another Lions-less Super Bowl! But that doesn't mean we can't break down the matchup Pride Of Detroit style: On Paper!

Share All sharing options for: On Paper: Super Bowl XLVII

Alas, Super Bowl Sunday is nearly here: the pinnacle of the NFL season. By the weekend's end, one team will solidify their legacy among the greatest of all time, and the other will take home the silver medal of nothingness. Unfortunately for Detroit Lions fans, this will be our XLVIIth Super Bowl in a row without a chance at league supremacy. But just because Detroit won't be holding up the Lombardi Trophy yet again doesn't mean we can't give the game the ol' "On Paper" treatment. So, let's close our eyes, pretend Joe Flacco is a skinny Matthew Stafford and delve into the statistical pool of these two teams. 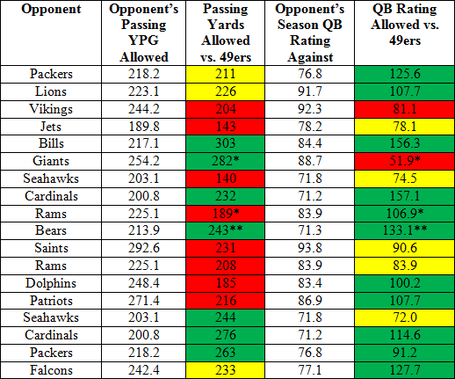 Despite their low ranking, the 49ers pass offense has been extremely efficient. Although they only outgained opponents' averages in passing yards allowed in seven of 18 games, they surpassed passer rating averages in 11 of 18.

Overall, the 49ers rank fourth in passer rating, averaging 101.2. They also rank fourth in completion percentage (66.3 percent), second in yards per attempt (8.1) and tied for first in interceptions thrown (9). The reasoning for their low yardage ranking is simple: the 49ers throw the ball less often than the average team. In fact, only the Seattle Seahawks threw the ball less than San Francisco.

What is particularly interesting about the 49ers aerial attack is how similar the passing offense was under both Kaepernick and Smith. Both had the exact same amount of passing attempts in the regular season, and their statistics are strikingly similar:

Of course, Kaepernick brings a huge running threat with him, but we'll get to that in a bit. 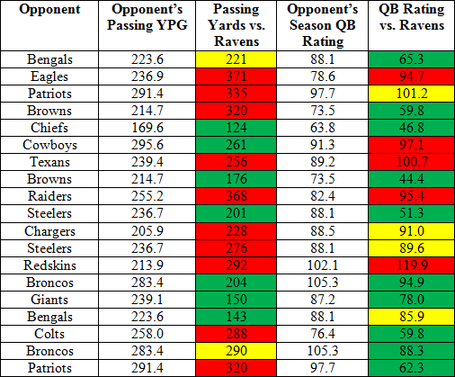 Looking at the raw statistics reveals little. The Ravens rank 11th in passer rating allowed (80.6), tied for 16th in yards per attempt allowed (7.0) and 12th in completion percentage allowed (60.1 percent). Overall, I think it's fair to call the Ravens pass defense average or slightly above average.

Advantage: 49ers +1. Though the 49ers lack a receiver who can take over the game, the options they do have all provide an important aspect of the game. Randy Moss can give you the occasional big play, Vernon Davis has great hands and can move the sticks and Michael Crabtree is finally starting to emerge as a No. 1 receiver (four 100-yard games in his last seven). The Ravens defense is clearly not as threatening as it used to be, especially without the services of Lardarius Webb for most of the season. 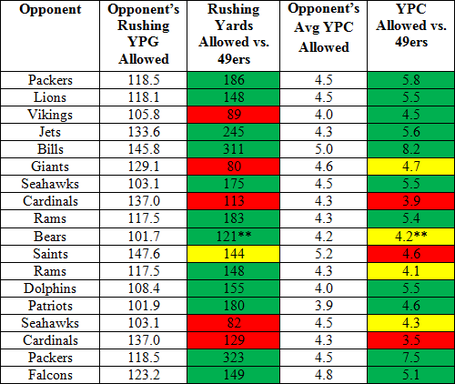 The 49ers running attack has been consistently solid all season. They outgained opponents' rushing yards allowed averages in 13 of 18 games and yards per carry averages in 11 of 18.

Overall, the 49ers clearly have one of the best running games in the league. They rank third in yards per rushing attempt (5.1), tied for second in rushes of 20+ yards (17) and tied for sixth in rushing TDs (17).

But, once again, there doesn't appear to be much of a Kaepernick difference. Under a Smith-led offense, the 49ers averaged 170 rushing yards/game. Under Kaepernick: 159.

Of course, just because the team hasn't changed much with Kaepernick under center doesn't mean Jim Harbaugh made the wrong decision. If anything, it has proven that Smith is basically obsolete, with Kaepernick being the cheaper, more explosive option. 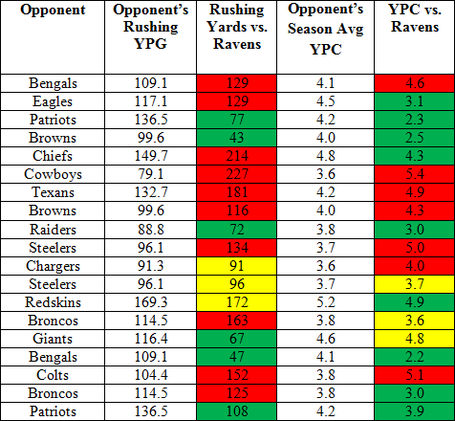 Again, we see a lot of inconsistencies with the Ravens defense. They've only held six of 19 opponents below their yardage averages and nine below yards per carry averages.

The numbers, however, show that the Ravens defense may be better than the chart suggests. They Ravens rank tied for seventh in yards per carry allowed (4.0) and have allowed the seventh-least amount of rushes of 20+ yards (8).

Still, the Ravens run defense is not at all what it used to be, and it hasn't been very good in the playoffs, either.

Advantage: 49ers +1.5. Again, the 49ers have all the important phases to a successful rushing attack: a consistent workhorse (Frank Gore), a change-of-pace bruiser (LaMichael James) and a mobile quarterback (Kaepernick). The 49ers should be able to run it successfully against the Ravens and I'd be shocked if they didn't gain at least 140 total yards. 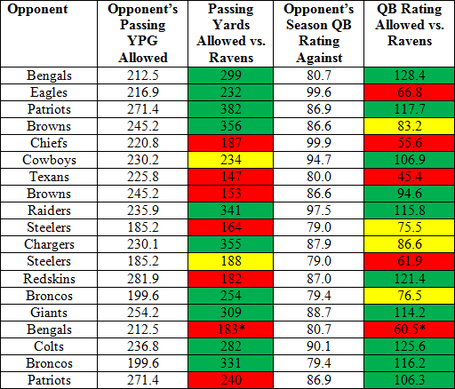 Again, we see some inconsistencies with the Ravens, but overall, a pretty solid unit. Baltimore has outgained opponents' averages in 10 of 19 games and has surpassed passer rating averages in 10 as well. Lately, Flacco has been on a roll, amassing a passer rating of 100+ in five of his last six games (not including the last week of the regular season, when he only threw 8 passes). 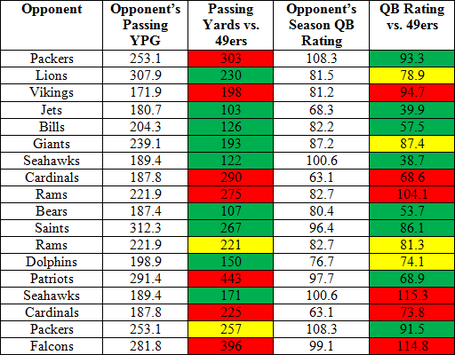 This is the most surprising chart of the preview. The 49ers have held just nine of 18 opponents below yardage averages and only eight below passer rating averages. Even lately, the 49ers have struggled to hold their opponents in check. For a defense that has been called nothing short of dominant, this is a bit shocking to see.

The raw numbers tend to help the 49ers' case, but not completely. They rank sixth in passer rating allowed (78.0), second in yards per attempt allowed (6.1) and 11th in completion percentage allowed (59.4). However, putting those numbers into context helps explain why their chart is so mediocre. The 49ers have played seven of their 18 games against bottom six passing offenses. So their high rankings are very much reflective of their weak opponents.

Still, the 49ers pass defense has to be considered, at the very least, average.

Advantage: Ravens +1. While Flacco has had his struggles this year, he seems to have found his groove and has been playing as well as anybody in January. Combine that with an overrated 49ers pass defense and you have the Ravens' key to win the game. If Flacco continues his current streak of excellent play, he could very well lead the team to victory. 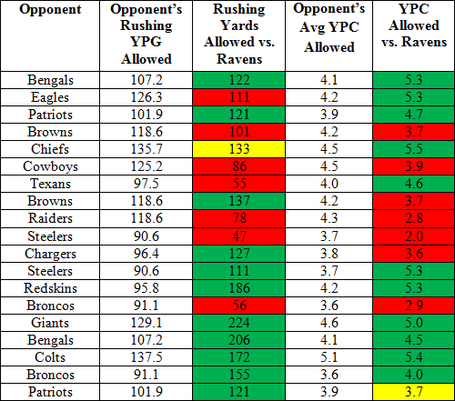 Just as Flacco is hitting his stride, it appears the Ravens running game has also turned the corner. Overall, Baltimore has outgained opponents' yards per game average in 11 of 19 games (and eight of the last nine) and yards per carry averages in 11 as well. (Interesting to note: the Ravens fired their offensive coordinator after the Redskins game.) 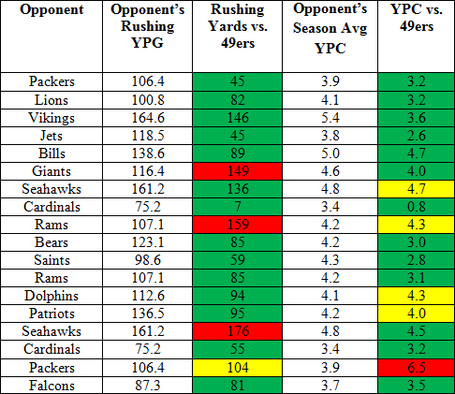 The 49ers are tied for third in yards per carry (3.7) and fourth in rushing TDs allowed (7). They've only allowed 9 rushes of 20+ yards (tied for 10th) and are one of six teams to not allow a rush of 40+ yards. Pretty much any way you put it, the 49ers run defense is dominant.

Advantage: 49ers +0.5. This is by far the most intriguing matchup of the game. The Ravens run offense has been on fire as of late, but the 49ers have been dominant all season long. If the Ravens can manage at least moderate success, it will do wonders for them. Looking at the 49ers' chart, it becomes pretty easy to spot the losses on their schedule (Vikings, Giants, second game against Rams and Seahawks). Run effectively against the 49ers and you're on your way to a win.

The 49ers come out with a +2 advantage and have an advantage in three of the four major matchups. However, all is not lost for the Ravens. Most of these advantages are small for the 49ers. The Ravens are also playing some of their best football in the past month. If the Ravens get their running game going, Flacco continues to play well and the pass defense holds up (things the Ravens have done particularly well lately), they have a good shot at taking down the Niners. However, San Francisco has been doing it all year and shows no sign of slowing down. 49ers 31, Ravens 24.