Free agency begins next Tuesday. In what promises to be an active offseason, we are breaking down the Detroit Lions' best options by position. First up is offensive guard.

The Detroit Lions' starting offensive line is going to be different for the first time since 2010. With Stephen Peterman ousted and Jeff Backus' status still unknown, the Lions will likely be searching for at least one offensive lineman to join the squad this offseason. While it's certainly possible Riley Reiff gets moved inside to take Peterman's spot, as Sean suggested, I believe it is more likely that the Lions go after one of the guards available in free agency. Here are a few of their options.

Brandon Moore is regarded as one of the best guards in the 2013 pool. I re-watched his Week 4 performance against the impressive San Francisco 49ers defensive line. Though the New York Jets only managed 45 yards on the ground in a losing effort, Moore's run blocking skills jumped out as a huge strength. On a counter play, Moore displayed his speed, agility and smarts. 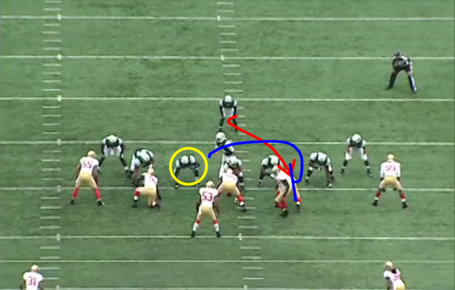 On this play, Moore needs to loop around the line quickly and seal the hole from the inside before the running back gets there. 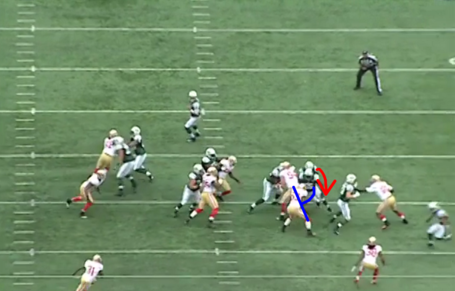 As you can see, Moore puts himself in a great position to take the linebacker out of the play. His block is mediocre, but his positioning is perfect, so the play still gains 4-5 yards.

However, a bit concerning was Moore's ability (or lack thereof) to pass block in one-on-one situations. On two occasions, Moore was sidestepped with ease by Ray McDonald. 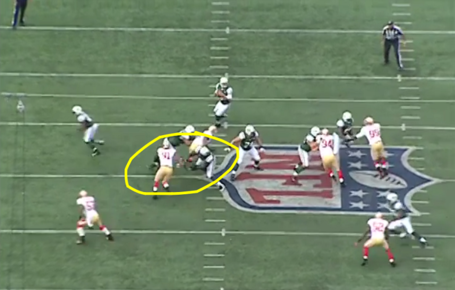 Moore tends to be too aggressive in his pass blocking, making him vulnerable to a swim move that quickly puts him off balance. Here it happens again: 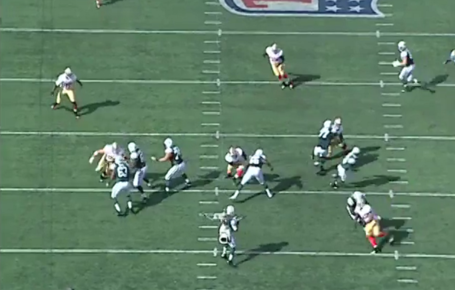 Moore (center of the play) was in perfect position less than a second ago, but the defender got him off balance quickly and forced a quick throw.

With the Lions' high frequency of pass plays, Moore's struggles in pass protection are tough to overlook. And at age 33, Moore's best days are likely behind him. Still, with the Lions lacking a solid rushing attack since the days of Barry, Moore is a tempting option.

Another possibility for the Lions is Andy Levitre. Like Moore, Levitre is regarded as one of the best free agents available. However, Levitre has yet to prove his longevity and consistency. He has only been in the league since 2009, when he was drafted in the second round by the Buffalo Bills.

Levitre failed to jump out when watching on film, but as an offensive guard, that's a good thing. For consistency purposes, I also watched his game against the 49ers. However, Levitre played left guard in this game, often matching up against Pro Bowler Justin Smith.

Levitre held his own against Smith, holding him without a sack. And he managed pretty well against the run, as well. On a run designed to go directly at Levitre, Andy managed to hold Smith at bay just long enough for C.J. Spiller to break free. 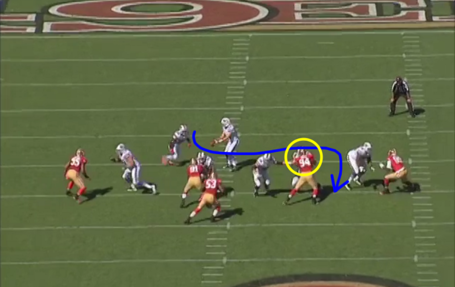 Levitre must get to Smith's right and seal him out from the inside, a task much easier said than done. 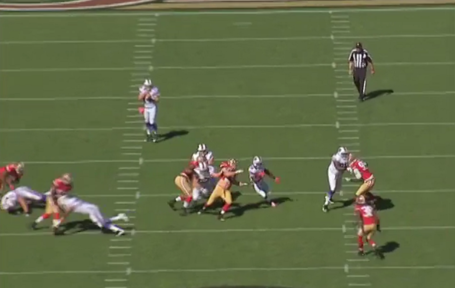 Levitre doesn't quite get to the inside, but he engages Smith long enough and turns him around. As Smith finally escapes the block, he has a great view of Spiller running right by him.

The biggest concern with Levitre is his price. Entering the offseason at just 26 years old and widely regarded as the best pass-blocking guard available (he also has NFL experience at left tackle), the Lions would have to allocate a lot of offseason resources to nab him. Considering the Lions' more pressing needs, I would say they are a long shot to corral Levitre.

Perhaps more in the Lions' financial wheelhouse is intriguing free agent Donald Thomas. Thomas, a sixth-round draft pick in 2008, has bumped around the league in his five-year career. He spent two years with the Miami Dolphins, suffering a Lisfranc fracture before being released the next season. After spending half of the 2010 season without an NFL home, the Lions actually scooped him up. However, he remained inactive for the rest of the season. The New England Patriots gave Thomas a new home the following season, and he seemed to excel in a limited role in New England. Occasionally used as a fullback, but mostly as a backup guard, Thomas made great use of the field time he got.

When starting right guard Dan Connolly went down with an injury in Week 2, Thomas stepped in and impressed. 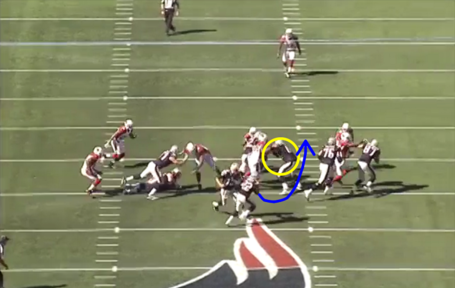 Thomas showed impressive speed and footwork by getting to holes quickly and anchoring himself like in the picture above. But Thomas also displayed his savvy against an underrated Arizona Cardinals defense. 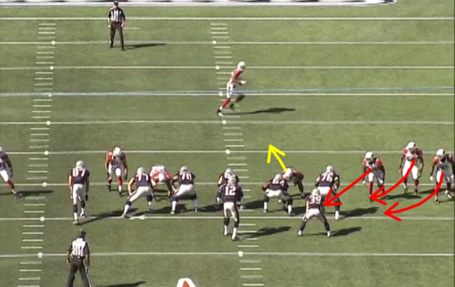 Arizona tried to disguise its pressure by dropping the defensive tackle over Thomas into coverage while sending two blitzers on the edge. However, Thomas was not shaken by the ruse and nonchalantly took care of the blitzing linebacker with ease. 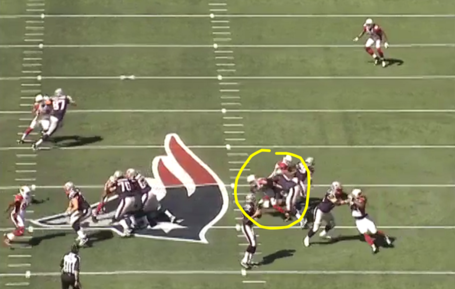 Thomas sent the linebacker flying away from the play, giving Tom Brady plenty of time and space.

Thomas' tape was as good as anybody's I've seen this offseason, and he will likely come at a considerably lower price than Levitre. It's hard to gauge what the Lions think of Thomas considering they picked him up but never made him active. Still, I think of these three candidates, Thomas both offers the most and will be the biggest bargain of the 2013 free-agent guard class.