The Detroit Lions' most recent signing of Israel Idonije has been almost universally praised, but is he really the answer at defensive end? A review of his 2012 film gives us some answers.

Share All sharing options for: Video review: Is Israel Idonije a starting DE?

Former Chicago Bear Israel Idonije will don the Honolulu blue next season. The signing comes a bit out of nowhere, as I don't recall any rumor-mongering linking Idonije to the Detroit Lions at any point this offseason, even though we expected them to add a veteran lineman. But he comes as a welcome addition to the Lions roster, which is lacking experienced defensive ends. Idonije is coming off one of his best statistical seasons, tallying up 7.5 sacks and 48 total tackles in 2012 (second and third most in his career in the two categories).

But I want to look beyond the stats and expert opinions. So I watched every snap of two games of his last season: his best statistical performance (vs. St. Louis Rams) and his game against the best opponent (San Francisco 49ers*). The results were not exactly what I was expecting.

The first thing I noticed is that Idonije will not be a Cliff Avril replacement. Idonije may end up taking Avril's position at left defensive end, but his play will look drastically different. Idonije (6'6", 275) is much bigger than the man who preceded him (6'3", 260). This is made even more obvious when delving into their playing styles. Avril was mostly a speed rusher, always trying to beat his man to the outside. Idonije, conversely, loves to battle with his hands and overpower his opponent. 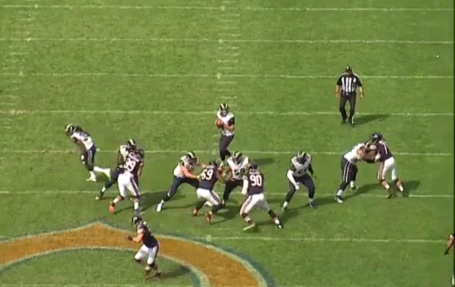 In this rare instance, Idonije is lined up on the right side, and he finds himself in a bit of trouble. The left offensive tackle (for the record, that is NOT Jake Long) has decent position on him. However, Idonije completely manhandles him and breaks free. 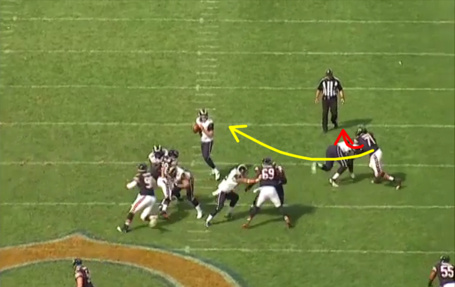 Tossing the tackle to the side effortlessly, Idonije gives himself a clear path to the quarterback and picks up the half-sack.

Idonije displayed similar strength and evasiveness from the defensive tackle position as well. 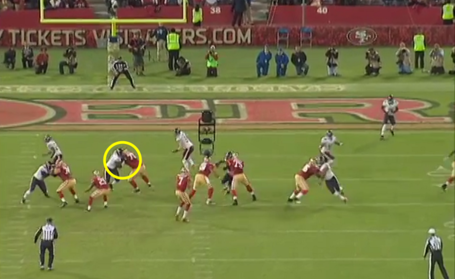 As we jump into the play (you can watch it here), Israel is already in the process of eluding the offensive guard. Again, he uses his body and arms to toss the lineman aside. 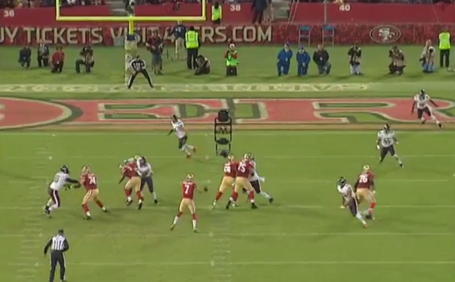 Frank Gore tries to step in and clean up the mess, but, again, Idonije slides by him, making great use of his arms to swim him aside. Most importantly, he finishes the play and picks up another half-sack.

Overall, I found his role as a defensive tackle a little more suiting to his skill set, which brings me to the biggest concern I had with Idonije's tape: his lack of explosiveness.

Throughout both games I watched, Idonije consistently struggled to get off the snap on time, often finding himself out of the play before even leaving his three-point stance. 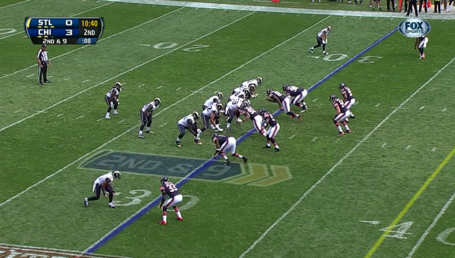 Idonije (lined up at left defensive end) is still in his pre-snap stance as Sam Bradford takes his first step back with the ball in hand. As you can see, all the offensive linemen have already left their stance, giving the right tackle a clear advantage over Israel. The defensive tackles are already in first gear, while Israel is stuck in park.

This happened so consistently that I thought it may be by design. After all, the other defensive end is also slagging behind in the screenshot above. However, the more I watched Idonije's replacements, the more I realized this was solely an Idonije problem. To reiterate this point, check out how far behind the play he is here: 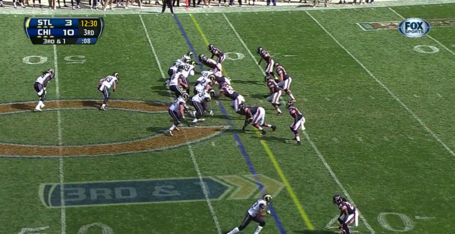 At this point, we can already see the play in full development. It appears to be a run (or play-action) to the left. But where is Idonije? Still in his three-point stance at left defensive end. His defensive partners are already at, or beyond, the line of scrimmage, but Idonije hasn't moved.

So what does that mean for the Lions? Though he may begin the season as a starting defensive end, I don't think he'll end up there. He's much more useful when he is in a position to use his strength over speed.

On the bright side, Idonije provides the Lions with versatility. Last year, the Lions teased the idea of moving players all along the defensive line. We all were geeked at the idea of Ndamukong Suh and Nick Fairley lining up at any and every defensive line position. However, for whatever reason, we never ended up seeing much of that.

Now, with the addition of Jason Jones and Idonije, I think we can fully expect a lot of movement along the defensive line. Both players have proven worthy at both end and tackle and will give the Lions endless formation possibilities. While I'm not quite as pumped about Idonije at defensive end as Pro Football Focus, I am very excited to see how his addition will affect the rest of the defensive line.

*Side note: re-watching San Francisco thoroughly gash the Chicago defense was an absolute pleasure. I highly recommend it.