Was signing quarterback Matthew Stafford to a lucrative contract extension the right move for the Detroit Lions? Absolutely.

Share All sharing options for: Matthew Stafford's extension a good deal for Lions

Before drafting Matthew Stafford first overall in 2009, the Detroit Lions spent a lot of time and resources on trying to find their franchise quarterback. Just in the five years before Stafford arrived in Detroit, the Lions started Joey Harrington, Jeff Garcia, Jon Kitna, Dan Orlovsky and Daunte Culpepper at quarterback. None of those players lasted very long, though, and none of them displayed the traits of a true franchise quarterback.

Back in 2009, Stafford was merely the Lions' latest candidate for the franchise quarterback role. There was no guarantee he would develop into that kind of a player, especially after his first two seasons in the NFL were devastated by injuries. 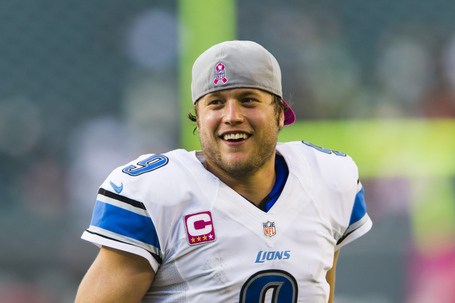 But now, as the 2013 season approaches, it's clear that Stafford is in fact the Lions' franchise quarterback. He led the Lions to the playoffs in 2011, and he's thrown for more than 10,000 yards over the last two seasons. And perhaps most notably, Stafford has been rewarded with a three-year contract extension and a deal that will pay him $76.5 million over the next five years.

News of Stafford's mega extension, as expected, raised some eyebrows. Unlike Joe Flacco and Aaron Rodgers, who both received extensions earlier in the offseason, Stafford has not won a Super Bowl. And unlike Tony Romo, who got an extension of his own this year, Stafford has not won a playoff game. In fact, Stafford has only been to the playoffs once, and he currently only has a 1-23 record against winning teams. Naturally, many are wondering why the Lions are willing to pay a somewhat unproven player so much money.

Because of the lack of a rookie wage scale when Stafford, Calvin Johnson and Ndamukong Suh were drafted, the Lions have been dealing with salary cap issues for the last few years. They have leaned heavily on restructuring contracts to create room, and Stafford's original deal was restructured multiple times. This is why he had a cap hit of $20.8 million for 2013 and $19.3 million for 2014. And that large cap hit in 2014 is why franchising Stafford wouldn't have been a realistic option had an extension not been worked out.

It's really quite amazing that Stafford's average pay per season is only $15.3 million in his new five-year deal when you consider how little leverage the Lions had in negotiations. The franchise tag wasn't really in play, and the pressure was on the Lions to get a deal done in order to free up cap room for 2013 and 2014. What's more, the idea that Stafford could have played out his deal, driven up his value even more and cashed in on the open market gave him even more leverage. It's true that he would have risked his value going down over the next two seasons, but that wouldn't have been as risky as the Lions potentially letting him become a free agent.

Simply based on what Stafford's done in the NFL so far, I don't think there's any doubt that $76.5 million over five years is too much money, especially after the struggles he had last season. However, the reality of the situation is that franchise quarterbacks don't grow on trees. It took a long time for the Lions to finally find theirs, and making sure Stafford stays in Detroit for the foreseeable future was their only real option. They weren't going to let him hit the open market in the 2015 offseason, and given the cap ramifications, waiting around until next year to get a new deal done simply wouldn't have made a lot of sense.

Now, could Stafford have a dreadful next two seasons and make this deal look quite bad in hindsight? Sure. Anything is possible in the NFL. In that regard, giving him an extension worth so much money is a bit risky. At the same time, though, without an extension, Stafford easily could have gone out and earned even more money with his play in 2013 and 2014. At least this way, the Lions know what they are paying him, for better or for worse.

What's important for the Lions is that their franchise quarterback is now under contract for five more seasons. In today's NFL, an average of $15.3 million per year for a quarterback with a pretty high ceiling is good value, especially given the hand the Lions were dealt. They lacked leverage and had to deal with the lasting effects of the old system of paying rookies. That was really the case last year as well with Johnson, and now the Lions know their quarterback-wide receiver duo isn't going anywhere anytime soon.

For Stafford, this is also a good deal. He will be getting paid very handsomely over the next five years, and he will only be 29 years old in the final year of this contract. This means he will have a chance to earn yet another big contract when he enters his 30s. If he is able to play up to his potential, he could receive an even bigger payday down the road.

In the long term, Stafford's play in the coming seasons will ultimately determine if this was truly a good deal for the Lions. In the short term, though, based on the situation at hand, the Lions could have done a lot worse than $76.5 million over five years for their franchise quarterback.