Last Friday's preseason game gave fans their first look at the Detroit Lions' newly structured offensive line. A review of the film gives us an inside look at what the lineup may look like Week 1.

While Ziggy Ansah was busy stealing the spotlight of the Detroit Lions' first preseason game against the New York Jets, the offensive line was in flux. The Lions played around with combinations on Friday, giving plenty of players a chance to win starting jobs.

Before I jump into the film breakdown, let's take a look at how the Lions used these players during the game. I broke down each drive, listed the player at each position on the right side of the offensive line and listed how effective the drive was by several measures (drive summary, rushing yards and sacks allowed). Here are the results:

What jumps out to me right away is the amount of time Warford had at RG compared to Gandy. Gandy only played one series there, while Warford settled in for seven of 12 drives. Of course, Gandy also played double-duty at center for the second-team offense, but it was still striking to see Warford get so much time at his future position. Secondly, it should be noted that both sacks occurred with Fox at right tackle, although he wasn't really to blame for either, but we'll get to that in a little bit. Finally, I found it interesting that the Lions chose not to run the ball very often, rushing it only 10 times in the first half. This is especially surprising given we were hoping to see how a new RG would bolster last year's lackluster ground attack.

Obviously, this chart doesn't tell the entire story, so I ventured into some game tape.

Let's first look at the RT battle. Although only Hilliard got time with the first-string offense, Fox got nearly the exact same amount of snaps (Fox played in five series, Hilliard in four). First, let's see how they did in pass protection.

Neither player gave up a sack, but there were a few occasions in which Hilliard's man got by him (both to the outside). 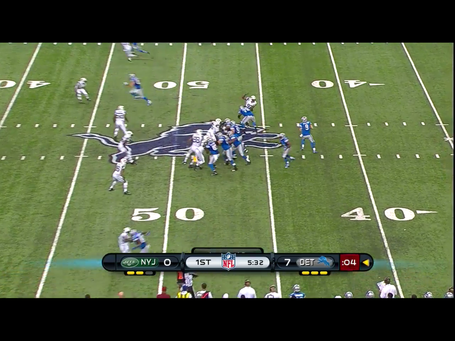 At the top of the screen, you can see Hilliard's man making a good swim move and blowing by Corey. This wasn't an isolated case. 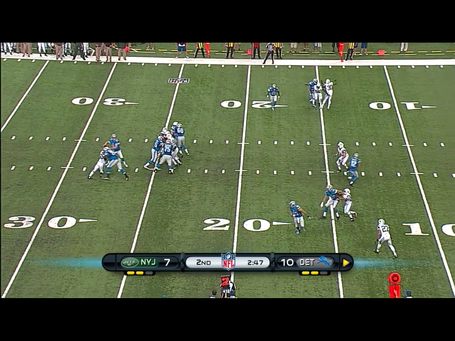 Now at the bottom of your screen, Hilliard's man has, once again, beaten him, this time with speed. The defensive end is dangerously close to swiping that ball out of Shaun Hill's hand. Luckily, Hill had great awareness and was able to scramble for 5 yards on the play. Side note: Warford (No. 75) is doing a great job in pass protection on this play and is the predominant reason Hill was able to escape.

Fox played a very clean game in terms of pass protection. Though he faced lesser competition, he wasn't responsible for any hurries. In fact, most of the pressure allowed was because of the left side of the offensive line. But that discussion is for another article.

Run blocking is a little harder to grade for the two, but it seemed like a push. There was one play in particular that stuck out as great in terms of communication between the right tackle (Fox) and the right guard (Warford). 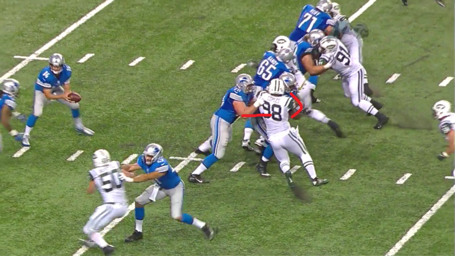 Both guys started the play doubling the defensive end. Warford held him up just long enough for Fox to get to the inside of him. After Fox got in place, Warford headed to the second level to take on the linebacker, who's just entering the screen. 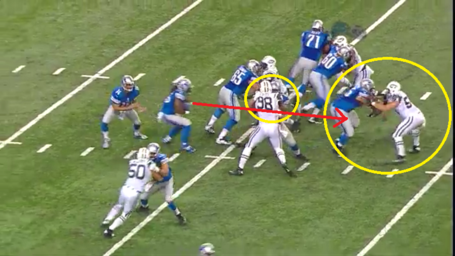 Warford locked with the linebacker, and Fox got in great position with the defensive end. The hole was small, and Warford's block was a little weak considering he was matched up with a linebacker, but the play resulted in a nice 7-yard gain.

Overall, I would say that Fox had the slight edge due to his impressive pass blocking, but the fact that Hilliard faced the Jets' No. 1 defense may neglect any real advantage. This battle is still very much up in the air.

It's a bit more difficult to get a sense of who is winning the battle at RG based on tape alone. Though Gandy started the game there, he only had five (!) total snaps at the position. He made a slight blunder on the first run of the game, but it was overshadowed by Rob Sims' larger mistake. 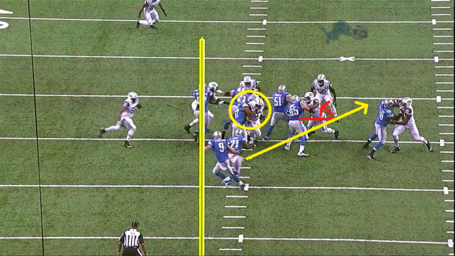 Gandy (No. 65) lost leverage on this play and was slowly being pushed back. He should have gotten around the tackle and sealed the edge on the defender's left shoulder. But it wouldn't have mattered anyway, because Sims was beaten with a quick move to the outside, forcing Reggie Bush wider than the play was designed for. It's worth noting that Hilliard (on the right) was doing a perfect job with the defensive end.

Warford had an overall impressive day both in run blocking and pass protection. Having been in on well over half of the Lions' offensive snaps, Warford was asked to do everything. He pulled to the other side of the line, he shot downfield on screens and he dealt with stunts.

While there wasn't a clear advantage in terms of play, it is pretty clear what the end game is at RG. It's Warford's job to lose. While the Lions aren't labeling him as the starter, they are giving him the majority of the snaps and are trying to give him as much experience as he can get before he (presumably) starts on opening day. Gandy would be a fine option at RG, but, on Friday, the Lions used him as he'll likely be used this season: as the team's backup center. It is obvious Warford will be in the starting lineup sooner than Gandy.