As the preseason draws nearer to a close, the Detroit Lions' linebacker position battle is becoming pretty clear.

It's pretty clear at this point that DeAndre Levy and Stephen Tulloch have locked down starting linebacker spots on the Detroit Lions roster. Ashlee Palmer seems to be the heavy favorite for the third linebacker job, but is there anyone nipping at his heels?

Looking at the film, it becomes pretty clear: Palmer has the instincts to be a quality starting linebacker. Check out this play Palmer made early in the Cleveland Browns game. 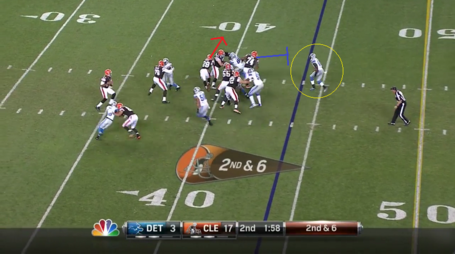 Palmer identifies this screen very early. But identifying the screen is only half the battle. There is an offensive lineman out there to take him out of the play. If he succeeds, this screen could go a long ways. 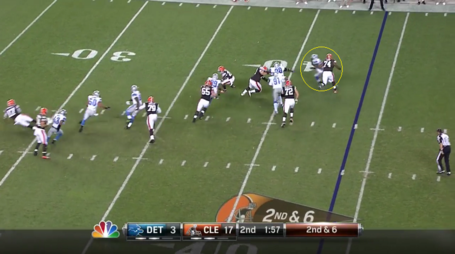 But Palmer smartly beats the lineman to the outside and takes away any lane for the running back to kick it toward the sideline. He both forces the back inside and makes the tackle himself for a loss of 8 yards.

Earlier in the game, with all the starters still in, Palmer made another quick read, but showed a potential downside. 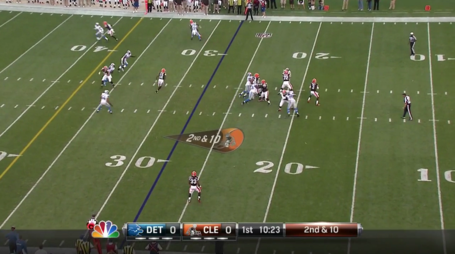 Palmer, standing just above the hashes at the 35-yard line, recognizes the crossing route by the receiver over the middle of the field. He begins his attack on the route before Brandon Weeden even cocks his arm back. At this point, he is in perfect position to either knock down the pass or lay the boom on the receiver for only a short gain. 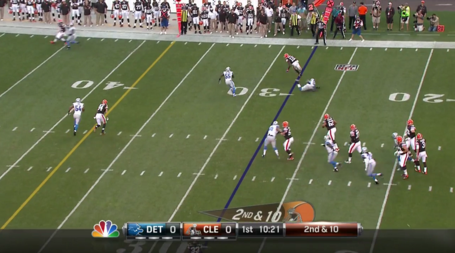 But Palmer takes a poor angle and barely gets a hand on him. His duty was to cover that side of the field, and with his missed tackle, the receiver has the entire sideline open for him.

I'm willing to give Palmer a pass here, because it is preseason and he most likely did not do a scouting review of his opponent. He clearly didn't anticipate Josh Gordon's speed on the play, but hopefully (I cannot put enough emphasis on "hopefully" here) during the regular season there would be plenty of talk about Gordon's speed during that week of practice. Still, it's a slightly concerning issue. 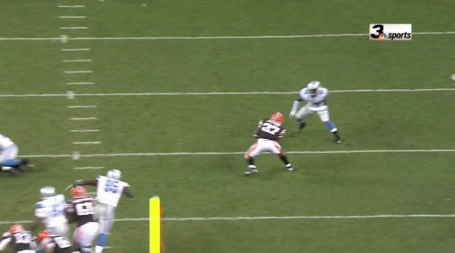 Okay, good positioning. Hips are somewhat squared up. He clearly made a good read on the p... 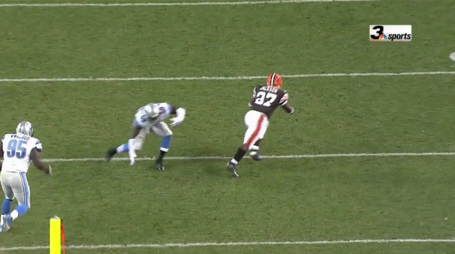 It wasn't all bad for Whitehead. On the play below, he managed to both create good penetration into the backfield and also display some gap integrity. 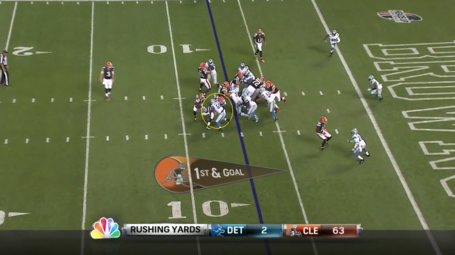 Whitehead is a yard deep in the backfield when the back is at his gap. He gets to the outside of his blocker to cut off the outside lane and force the back inside. A lineman is there to make the stop for a minimal gain.

As for the other linebackers on the team, there isn't much to get excited about. 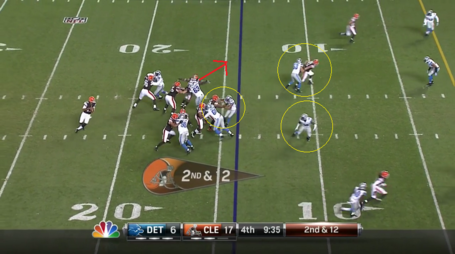 Whitehead (bottom circle) is the only linebacker to stick to his duties correctly on this play. The backers are playing a middle-zone defense, where their basic responsibility is middle depth on their side of the field. Travis Lewis (middle circle) bites hard on the play-action and is forced to scramble back to his zone. Cory Greenwood (top circle) gets locked on to one receiver and turns his back on the play. The result isn't pretty. 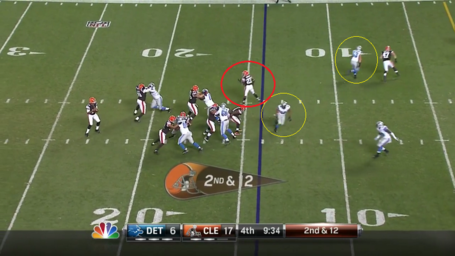 The running back slides out of the backfield unnoticed, and the two nearest defenders both have their back turned to him. He catches the pass and trots into the end zone untouched.

The good news is that Greenwood was cut on Monday. The bad news is that hopes were high for Lewis, but it appears the 2012 seventh-round pick isn't quite ready for the big time yet.

Overall, I think the starting job has already been given to Palmer, and he deserves it. The starting linebackers should be a relative strength of this defense. Aside from one miscommunication by Tulloch and a missed tackle or two, the starting team was actually fairly solid in this game. Tulloch, Palmer and Levy combined for 6 tackles and 7 assists.

The reason Brandon Weeden looked like Tom Brady in this game was much more the result of the four or five defensive backs on the field at the time. But I'll talk more about that next week, after they face the real Tom Brady.

Lions at Browns: Detroit sloppy in 24-6 loss to Cleveland