As the Detroit Lions' cornerback position heats up, we try and clear up who will make the team when the final cuts are made.

The Detroit Lions' cornerback position contains the most mystery of any on the roster. The depth chart is full of youth, new faces and unknown potential. The only thing we really know is Chris Houston is pretty good... and he proceeded to get burned pretty badly in the New England Patriots game. Still, of all the corners on the roster, Houston is the only one we really seem to know what we have in. So let's take a look at everyone else on the roster.

Before I get into the film, it should be noted that since it is the preseason, I do not have access to the wide-angle coaches film. I was only afforded the views given during the live broadcast. This makes it especially hard to evaluate defensive backs, who are out of frame for half of the plays.

Slay had a bit of a rough outing in his first start as a professional cornerback. On one of the first plays, he got burned for a 37-yard pass. His main problem, as many of us saw, was his inability to get his hands on the receiver early, causing him to fall behind the play quickly. Rather than looking at that play, I wanted to see if he improved later in the game.

Unfortunately, I saw Slay continue to struggle with press coverage.

At the bottom of the screen we see Slay getting his hands on the receiver. He actually makes contact this time, but all of his momentum is going backward. This makes it incredibly easy for the receiver to physically dominate him and create space by pushing Slay backward. On the play, the receiver is wide open for a first down catch, but drops it.

It's clear Slay has some growing pains ahead. We haven't quite seen the Slay that has been the talk of training camp yet, but our sample size is still very small. I look forward to keeping an eye on the guy.

Bentley was all poised to be the Lions' breakout defensive back this year. But after the Lions drafted Slay and plucked Glover Quin out of free agency, Bentley's spotlight has dimmed. Bentley didn't get a whole lot of playing time last week, but he still showed why he'll be a valuable commodity this year. 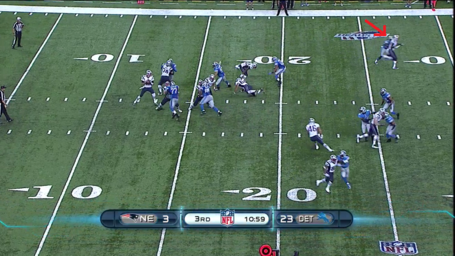 After playing a little nickel cornerback in the first half (and forcing a fumble), Bentley got some time at the right corner position in the second half. As you can see above, he has the ability to completely blanket his receiver. He is nicely lined up right at the receiver's hip and squared up perfectly. He is prepared for pretty much any route at this point. And best of all... 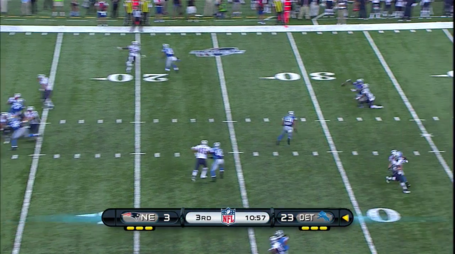 I think Lions fans should still be excited about Bentley, despite his diminished role this season. He's a young talent and has shown some versatility playing in the slot. However...

...if there is a sign that Bentley isn't quite ready for the big time, it's the Lions' recent signing of Mathis. Mathis got considerable time as the nickelback in the first half of the game. Additionally, he played safety in the second half. Overall, the veteran corner/safety was the most impressive defensive back on the field against the Patriots.

Mathis nicely batted down the ball on a beautifully read quick-out pass. But he also excelled in coverage. 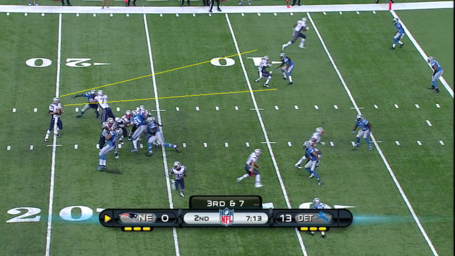 On this key third down play, Mathis' guy is Tom Brady's first read. The receiver fakes a move to the inside, but Mathis stays squared up and shows great discipline by not taking the bait. With a little help from the new Ford Field turf, Mathis closed in on his receiver when he made his break and forced Brady to look elsewhere. 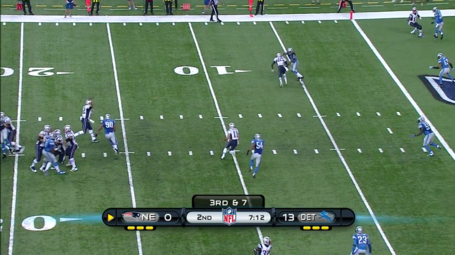 Brady forces a throw into a tight window and the ball falls incomplete. The Patriots are forced to settle for a field goal.

I think Mathis has done enough already to warrant a roster spot with the Lions. His versatility as a safety only adds to his value, and may cause the Lions to keep one more cornerback and one less safety.

Green was easily the most intriguing corner to watch in this game. Excluding the two starting corners, Jonte had the most playing time of any corner on the roster. The results were mixed.

Green was targeted often on Thursday, and one thing that became clear was that he always seemed to be in a position to make a play. The question was did he make the play? 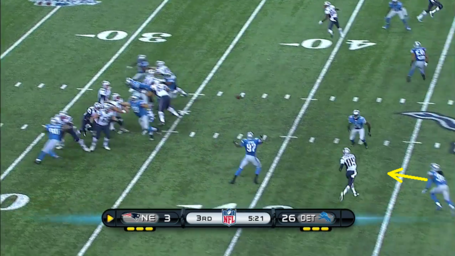 As the ball is in the air, Green is in good position to make a play on the ball. He could go in and bat the ball down or try and make a well-timed hit, jarring the ball loose. Jonte goes for the deflection. 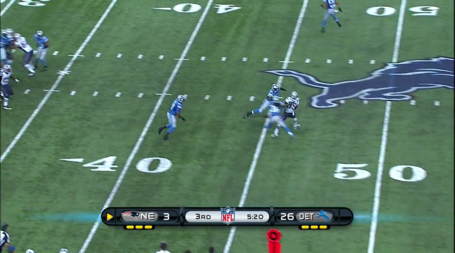 He misses. And with the miss, he also fails on the tackle, giving the receiver an extra five yards and a first down.

However, on the other side of the coin, Green also occasionally made a play or two. 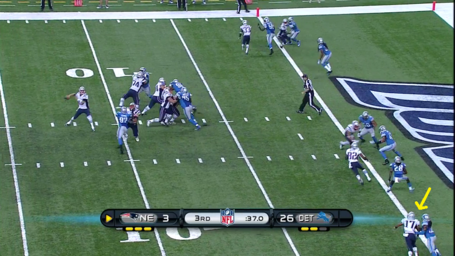 On this fourth down play, Jonte is again in perfect position, hugging the hip of his receiver. This time, though, he gets a hand on the ball and forces the incompletion. 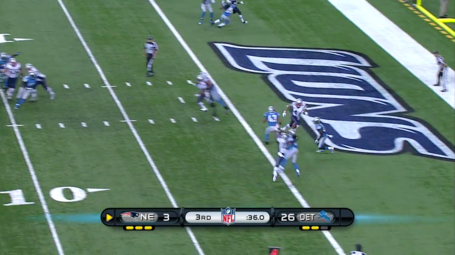 It was a great play on a huge down.

Overall, Green had a very up-and-down game. It's worth noting that Green also had two penalties called on him (although I disagreed with one). This kind of inconsistency is not exactly what you're looking for in a cornerback, even if he does occasionally make plays (see: Alphonso Smith, currently out of the NFL). I still think he finds a spot on the final roster, but his security is slipping.

Both Bartell and Greenwood didn't see the field too much against the Patriots. Of the two, Bartell clearly looked more polished. Bartell is expected to win a roster spot this year, and he proved why in this game. On one play, Bartell did a good job forcing his receiver toward the sideline, then forcing him out of bounds when he caught the ball. It was a savvy move from a veteran.

Greenwood failed to really make any plays in his limited snaps. He was thrown at twice during the game. One was a throw-away play, while the other was a complete pass in which Greenwood also failed to make the tackle. Though that play was ugly, his grade is still very much incomplete. At this point, he's on the outside looking in, but a solid final preseason game may earn him the final cornerback spot on the team.

How do you guys rank the Lions' cornerbacks?