CoachSpeak: Jim Schwartz on Reggie Bush and the Lions offense

This week's CoachSpeak checks out how the Minnesota Vikings defended the Detroit Lions offense and what the Lions did about it.

Share All sharing options for: CoachSpeak: Jim Schwartz on Reggie Bush and the Lions offense

Following the Lions' Week 1 victory over the Minnesota Vikings, a member of the press asked Jim Schwartz how Reggie Bush is able to change the Lions' running game. Here's how Schwartz responded:

This is pretty standard Jim Schwartz fare -- he states the obvious, and doesn't really answer the question. Given that there are 15 games left in the season, yes, it does remain to be seen how Reggie Bush affects the Lions' ability to run the ball. But, after Week 1, the early returns look pretty positive, no? To understand why the question was asked requires a quick (and painful) reminder of why the Lions signed Bush this offseason.

The Lions may be prepared "either way it goes" this year, but last season, that simply wasn't the case. Opposing defenses almost exclusively played back against the Lions in 2012. In fact, last season, the Lions ran 855 of their 1,160 offensive plays (74 percent) -- the most in the NFL -- against defenses featuring six or fewer players in the box, per Kevin Seifert of ESPN. Other teams dared the Lions to run the ball last year, and they couldn't, at least not effectively enough to make teams pay. While facing more favorable looks than any other team, the Lions' rushing offense graded out at a pedestrian +5.3, good for 17th in the NFL. That may seem surprisingly high (I was honestly a little shocked), but keep in mind that the Lions faced the most run-friendly conditions imaginable. Opposing defenses extended an invitation and left the front door wide open, but the Lions running game essentially lit a bag of dog poo on the porch and bailed.

Enter Reggie Bush, designed to improve on that. Those favorable defensive looks provided most of the marketing the Lions needed to sign him; he's said as much on multiple occasions. Let's see some of those looks from this past Sunday: 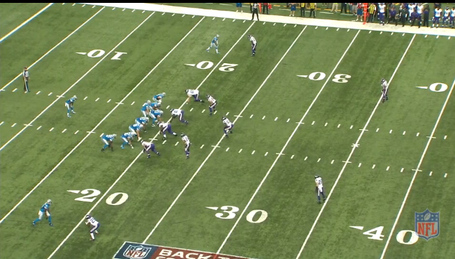 This is the Lions' second play from scrimmage. The Vikings' safeties are sitting in a "two-high" alignment, about 15 yards back from the line of scrimmage. The logic behind it is simple: Don't give up the intermediate to deep routes, and don't let Calvin Johnson beat you. The logic for the offense here is equally simple. It's a numbers game -- the Vikings have seven players around the ball, and the Lions have eight (not counting Matthew Stafford). For the offense to work, the Lions have to be able to run the ball here.

And, that's just what they do. The offensive line blocks this perfectly, and Bush has plenty of room in front of him: 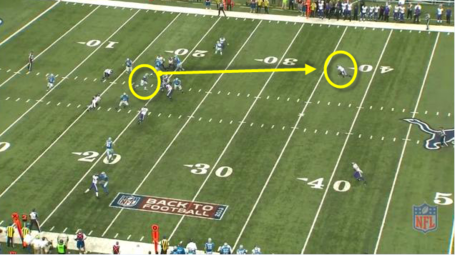 The safety on Bush's side is still 17 yards away as he hits the hole. By the time he gets there, the Lions have an 8-yard gain. Bush beats the first tackle and makes it 12. First down, Lions.

That two-high look pretty much ruled the day. The Vikings showed two-high on 56 (by my count) of the Lions' 77 offensive snaps. The majority of the remaining snaps consisted of goal line formations (where it is physically impossible to show two-high) or the Lions' last two drives, where they were either running out the clock or simply taking a knee.

That coverage doesn't only affect the run game. It also opens things up underneath in the short passing game for Lions running backs and receivers not named Calvin Johnson. Besides, Schwartz has often described the short passing game as being the Lions' running game, so it's pretty much the same thing. As you probably expect, the Lions also did quite well underneath. Remember that middle screen Bush took to the house? Any guesses as to what the Vikings were showing on that play?

The Lions were happy to take what the Vikings' defense gave them, and it worked. Consider this: Of Stafford's 43 pass attempts on Sunday, only eight traveled more than 10 yards past the line of scrimmage. Those short passes accounted for 280 of Stafford's 357 yards. Throw in the Lions' 112 rushing yards, and they piled up almost 400 yards of offense without even making a risky throw. Bush, as you know, accounted for half that total by himself.

On a few occasions, though, the Vikings opted to play up a bit more: 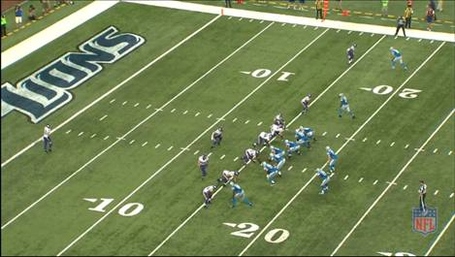 Here you'll see a single-high safety rolled over to help on Calvin's side (because of course he is). However, you're also looking at nine defenders at or around the line of scrimmage, a far cry from what the Vikings showed for the majority of the game.

As it turns out, the Lions were ready for this scenario: 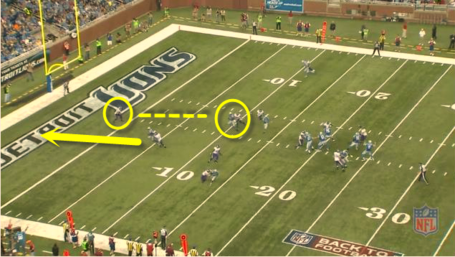 Brandon Pettigrew runs the middle seam and holds the safety just long enough for Calvin to get behind him. At that point, there's no question where the ball is going. Stafford is already in his throwing motion and delivers a beautiful strike to Calvin in the back of the end zone for a touchd... an incomplete pass. Can't win ‘em all, I suppose.

The Lions spent almost the entire game using the run and short pass to great effect, but even when they went for deeper throws, they were still fairly effective. Stafford completed 4 of his 8 deeper attempts for 77 yards, and two of those incompletions were Johnson non-touchdowns.

How is this going to affect opposing defenses moving forward? As Schwartz said, it probably remains to be seen. Obviously, teams aren't going to start abandoning Johnson in coverage. But, for the first time since the beginning of 2011, the Lions have the ability to make teams pay underneath. If they can keep doing so, teams will be forced to respect that threat.

(P.S. If any of you are in Arizona this weekend and see a blond guy with a terrible beard and a Louis Delmas jersey, feel free to come up and say hey. Go Lions.)