The Detroit Lions seek revenge against the Arizona Cardinals on Sunday. Our preview predicts another tight match against the NFC foe.

Share All sharing options for: On Paper: Detroit Lions at Arizona Cardinals

The Detroit Lions (1-0) head back to Glendale on Sunday to face the Arizona Cardinals (0-1). As you may remember from last year (if you haven't buried the game deep in your subconscious yet), the Cardinals slaughtered the Lions on their home turf last year, 38-10. That game featured 3 Matthew Stafford interceptions, 8 punts and thousands of post-game night terrors in Detroit.

This season, both teams are looking to improve on two disappointing 2012 seasons. The Cardinals have a whole new coaching staff, a new (but pretty old) quarterback and a new identity. The Lions have mostly the same staff, but a few new weapons that they like an awful lot. This week's game should bear little resemblance to last December's game, but which team looks to have the statistical advantage?

Just a reminder, all stats and rankings are from the 2012 season unless otherwise stated. Next week, we'll move to only 2013 statistics. 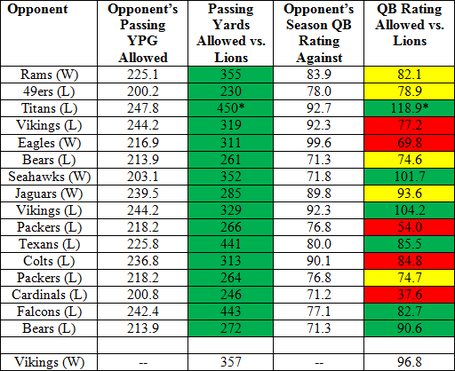 The Lions pass offense got off to a hot start last week against the Minnesota Vikings. Stafford completed over 65 percent of his passes and tallied 2 touchdowns. Most impressive, however, was his ability to do so with little help from Calvin Johnson, who only caught 4 passes for 37 yards.

That will be very important this week, as Johnson will line up against one of the best cornerbacks in the league. 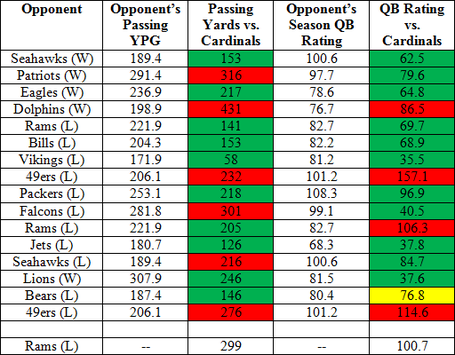 The Cardinals sported one of the best pass defenses in the league, and they showed as much last time these two teams met. The Lions were held well below their season average in yardage and passer rating in Glendale last year. How's this for an intimidating stat: Lions receivers had 246 yards receiving and 0 touchdowns. The Cardinals defense had 186 interception return yards and 2 touchdowns.

Patrick Peterson leads this defense as one of the premiere defenders in the league. Last year he had 7 interceptions, and although he was kept off the scoreboard last week, he's always a threat to create huge plays for the Cardinals defense. Last week, they had a tough time stopping the St. Louis Rams' passing attack, but I'm not ready to declare the Cardinals in regression yet.

Player to watch: Peterson. Though the pass defense struggled against St. Louis, you can't blame Peterson. His man for most of the game, Chris Givens, only had 2 receptions for 27 yards.

Advantage: Lions +0.5. Like last year, I think this is the most important matchup in the game. Last year, the Lions lost this matchup in embarrassing fashion. However, this year, the Lions receivers come into the game in a lot better health. The Rams found a lot of success targeting their tight ends and running backs in the passing game against Arizona. In fact, tight ends and running backs combined for 15 catches, 199 yards and 2 touchdowns against Arizona last week. This is good news for the Lions, which have no problem utilizing Reggie Bush or their group of tight ends in the passing game. Their contribution is key, as Megatron isn't likely to see too many targets this week. 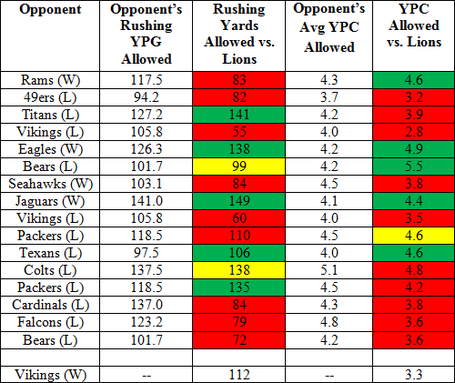 The Lions looked very impressive on the ground last week against a fairly solid Minnesota defense. Their yards per carry average is deceivingly low, as the running backs actually averaged 4.3 a carry, but Stafford's inability to do anything resembling a scramble brought that number down considerably. The tandem of Bush and Joique Bell looks to be working for them, but a lot of credit goes to the offensive line, which was opening holes for them all day. 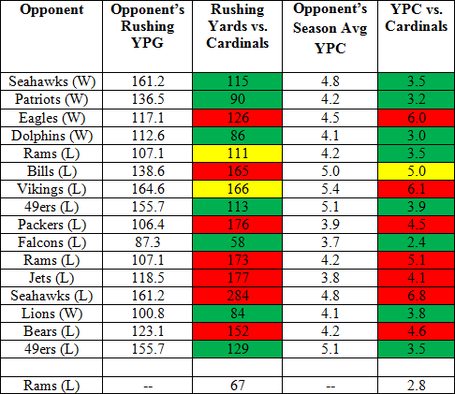 The Cards had a pretty average run defense last year. The overall yardage numbers look bad, but the Cardinals were playing from behind for much of the season last year, so teams were just racking up the rushing yardage in the second half.

Last week, they stymied the Rams rushing attack. However, it doesn't seem like the Rams have much of a threat on the ground, so I'm not sure how much we can read into that. It's hard to get a read on this defense with so little consistency from the stats last year and with little to nothing to go on from this season.

Player to watch: Jasper Brinkley. The five-year veteran led the Cardinals with 8 tackles last week, including one for a loss. It will be key for the Lions to get to the second level and take Brinkley out of the play, because he is a tackling machine.

Advantage: Lions +1. I don't have a lot of confidence in predicting this matchup, simply because I don't know what to expect from this Cardinals defense. However, it is clear that the Lions run offense is much improved. 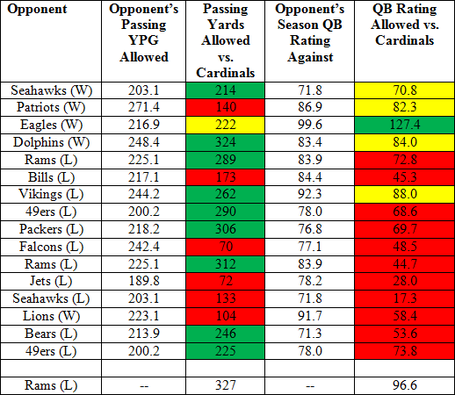 The Cardinals pass offense was one of the worst in the league last year. They jumped from quarterback to quarterback and never found an ounce of stability. But this year, things look to be drastically different. Their performance last week was statistically better than any game last year. They had more passing yards than any game last year, and Carson Palmer's passer rating beat every Cardinals quarterback's performance from 2012 but one.

In addition to acquiring Palmer, the Cardinals nabbed new offensive coordinator Harold Goodwin, who worked with Bruce Arians in Indianapolis last year. They have already seen the move pay off, with more production from second-year player Michael Floyd and fifth-year veteran Andre Roberts, who both had over 80 yards receiving last week. Oh, and they still have Larry Fitzgerald. This ain't your granddaddy's Cardinals pass offense, even if your granddaddy is one year old. 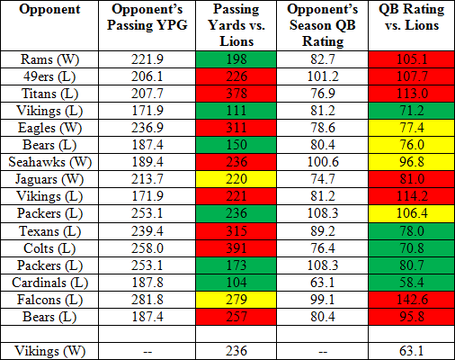 The Lions pass defense is also pretty hard to read. Last year, they were below average, but last week they were great. Of course, last week they played Christian Ponder, who, as far as I can tell, is not Peyton Manning.

The overall performance last week did have some troubling signs, however. The Lions ceded a few long plays against Ponder, and rookie Darius Slay was benched for the final quarter.

Still, the pass rush is key to the Lions pass defense, and if last week was any sign, the Lions will have no trouble pressuring the quarterback.

Player to watch: Slay. Slay will have to put last week's performance behind him quickly, because the Cardinals are going to target him a lot on Sunday. Second and third receivers Floyd and Roberts combined for 15 targets last week. It's clear that Palmer trusts these guys, and has no problem looking away from Fitzgerald. Slay will have to rebound this week.

Advantage: Cardinals +1. Perhaps I'm being too easily swayed by last week's performance, but the Cardinals pass offense looks brand new this year. The Lions will need to pressure Palmer all day in order to keep Arizona at bay. This is certainly possible, as Palmer was sacked four times last week... but he still put up 327 yards and 2 touchdowns. The Lions secondary is still too unproven for me to truly believe in them. I think the Cardinals connect on at least two 30+ yard plays on Sunday. 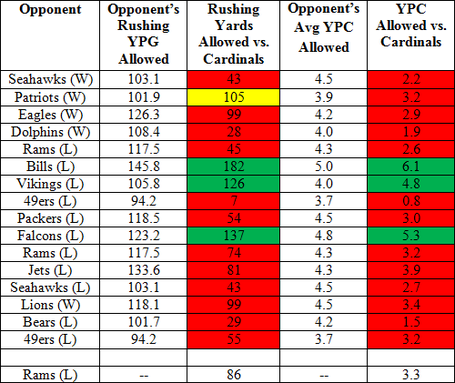 The Cardinals run offense was bad last year, and doesn't seem to be a point of focus this year. They only tallied 86 yards at 3.3 a carry last week and didn't manage a rush of over 11 yards. There's obviously not a lot of data yet, but there doesn't seem to be too much to worry about here for the Lions defense. 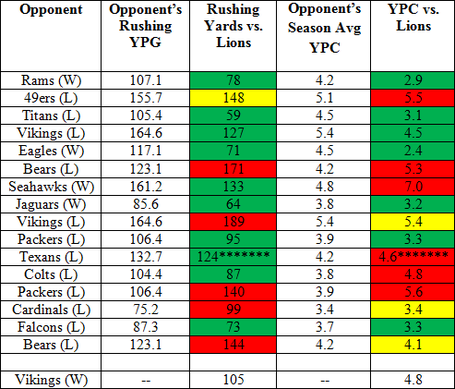 I don't know what to think. Do the Lions have a run defense that gives up 78-yard touchdowns on the first play of the game? Or are they a team that holds Adrian Peterson to 15 yards on the next 17 carries? I think the answer is closer to the latter than the former, but that first run sure makes you think twice.

Player to watch: DeAndre Levy. Levy came up huge in the first game against the run. He tallied 7 total tackles, including one for a loss. Levy had struggled in the past, but looks like he may have turned that page. If he can keep up this production, the Lions could have one of the better run defenses in the league.

Revenge. The Lions will be looking for revenge after last year's embarrassment at the hands of the Cardinals. I was at the game last year, and if the Lions are holding even half of the resentment that I still hold, they will be the more motivated team on Sunday.

Brand new Cardinals: If there's anything we can conclude from the first week of the NFL, it's that the Cardinals are not the Cardinals from last year. They have overturned nearly half of their roster, and, therefore, are a very hard team to predict this early in the season. There are a lot of unknowns with this team, and that makes them very dangerous.

The Lions have a slight +1.5 advantage, despite having the advantage in three of four matchups. I think the game will hinge on both teams' passing offense and their ability to protect the football. Both teams turned the ball over twice last week. However, the Lions forced 4 turnovers to the Cardinals' 2. The Lions also were more disruptive on defense, sacking Minnesota 3 times, while allowing 0 sacks. The Cardinals had 0 sacks and allowed 4. This will be the key to the Lions' victory. Lions 27, Cardinals 20.