Jim Schwartz spoke this week about the aggressiveness of the Washington defense. Let's take a look at some of the blitzes they use to attack offenses.

Share All sharing options for: CoachSpeak: Jim Schwartz on the Washington defense

This week, the Lions travel to our nation's capital (or thereabouts) to play the Washington Controversies. If you follow any Lions media coverage whatsoever, you've no doubt heard about the Lions' current losing streak in the D.C. area. Personally, I thought Drew Stanton laid all these losing streaks to rest in 2010, but I guess this one fell through the cracks. Obviously, 21 straight losses is not something you want to be associated with. As such, the press asked Jim Schwartz whether or not that streak meant anything. Here is his response (edited for length):

Classic Schwartz. If you were looking for a history lesson, tough break. We're talking about blitzing! The old "Gunther Cunningham Special." Washington does have some serious players up front, most notably Brian Orakpo and Ryan Kerrigan (who Eric Shinabarger profiled this week). However, even with his talented defensive ends, former New Orleans Saints and Florida Tuskers head coach Jim Haslett likes to bring added pressure when he can.

Despite some of the talent they have, the Washington defense has been absolutely shredded through two games. How badly? Pro Football Focus currently has them graded at a league-worst -50.5. For some perspective, the second-worst defense in the league by that metric (the Philadelphia Eagles) is closer to 13th than it is to 32nd. Judging by those stats -- or any others, really -- the initial reaction is that all that heavy blitzing is costing Washington yards and points. Truthfully, the situation is a little more complex than that. A lot of their trouble thus far, from what I have seen, can be attributed to blown tackles and blown coverage. In some cases, their blitzes have been remarkably effective, particularly from defensive backs in the slot. Let's take a look: 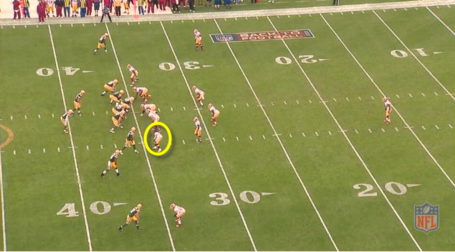 Brandon Meriweather is going to be lined up over Jermichael Finley in the slot, here. Finley's an athletic tight end; it makes sense that a team might use a safety to cover him. Other than that, Washington's defense looks ready to simply bring four pass rushers and sit back in coverage. 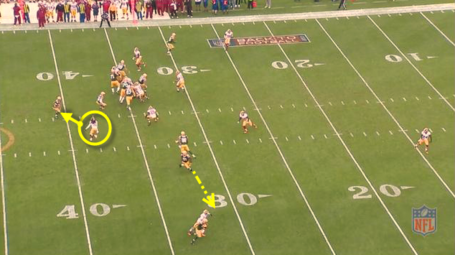 After the ball is snapped, the Green Bay Packers' offensive line flows to the left, drawing the rest of the Washington defense with them. Aaron Rodgers is going to keep the ball and roll to the backside of the play while the routes develop across from the action. Unfortunately for Rodgers, Meriweather is in his face by the time he turns around. Rodgers is forced to throw the ball away for an incompletion.

Let's take a look at another: 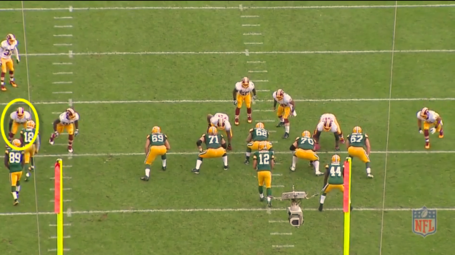 The Packers are lined up similar to the last play -- shotgun, single back, four wide. Josh Wilson is going to be the defensive back lined up over the slot receiver here on the left. His hips are square, his eyes aren't in the backfield. Meanwhile, the linebackers are threatening blitz over the center of the offensive line while Orakpo and Kerrigan look ready to storm in from far outside. 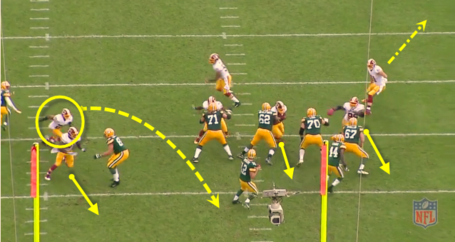 When the ball is snapped, Kerrigan drops into coverage from his stance while the two defensive tackles attack the right side of the offensive line, leaving the Packers' right guard with no one to block. Meanwhile, the linebacker has attacked the A gap, taking the attention of the left guard. Orakpo's first step is straight upfield, while staying wide, drawing the left tackle with him. This leaves a gaping chasm for Wilson to come free at Rodgers, who isn't able to get the ball off in time. The result is a sack and a 12-yard loss.

So far this season, the Lions haven't faced the blitz much. Matthew Stafford has actually been blitzed at the third-lowest rate in the league, per Michael Rothstein of ESPN. When the Lions have faced added pressure, they've been able to effectively employ the screen game to use penetration against the defense: 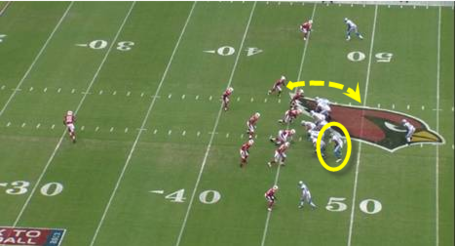 Here, you'll see the Lions with two WRs split out, Tony Scheffler at the right TE spot and Brandon Pettigrew lined up as an H-back. After the snap, the Arizona Cardinals are going to bring a blitz over the right side of the Lions' offensive line as Pettigrew drags across to the top of the screen. 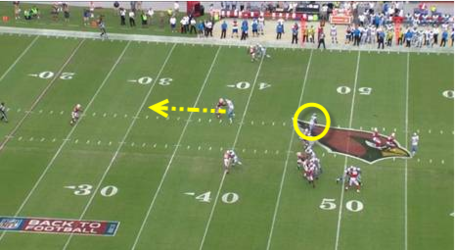 Scheffler takes his man 10 yards deep, while Stafford puts the ball through the blitzing Cardinals, into the hands of Pettigrew, who has all kinds of room in front of him. The result is a 12-yard gain and a first down. This has been a common theme through two games. The Lions have used screens and short passes to mitigate the effect of an aggressive defense.

Even with the success of the Lions' short passing game, you can still expect Washington to come with the blitz. And, judging by the way the Lions have lined up after two games, Washington should have plenty of opportunities to blitz out of the slot. Being a pass-first offense, the Lions employ at least three wide receivers on the majority of their offensive snaps. In fact, through two weeks, the most common formation employed by the Lions has involved a single running back and tight end, with three wide receivers split out. The Lions' second most common formation? The exact same thing, only from the shotgun (again from Rothstein). Washington defensive backs will likely be aligned in many of the same defensive looks that led to some of their successful blitzes last week.

Simply exposing the offense to a slot blitz isn't a guarantee that the gamble will work, of course. Rodgers still had a pretty good day last week. And, Stafford seems to have a knack for finding the open man when teams bring added pressure: POD noted this week that Stafford was 11 of 14 for 97 yards and a TD against the Cardinals blitz.

The threat of a blitz isn't going to deter the Lions from playing to their offensive strengths. Nor should it. But, you can bet your children's college funds* that we'll be seeing Josh Wilson, Brandon Meriweather or any other cover man coming free at Stafford this Sunday.

*Please do not actually do this.