Film review: What happened to the Lions' run game?

After a somewhat promising start to the season, the Detroit Lions' running game was stopped against one of the worst run defenses in the league. Our film review looks for an explanation.

Share All sharing options for: Film review: What happened to the Lions' run game?

The Detroit Lions came into Sunday's contest with the Washington Redskins with a decent-looking running game. Reggie Bush and Joique Bell had combined for 171 yards on 3.9 a carry through two weeks. The Redskins had the worst statistical run defense in the league at the time. So, even without Bush in the lineup, the Lions were expected to be successful running the ball against the Redskins. Yet, Detroit only managed 63 yards on 2.7 a carry. The most obvious explanation was the absence of Bush, but that answer seemed too simple and not very accurate. So I went to the tape for answers, and I found three reasons the Lions couldn't get things going against the Redskins.

1) The Redskins are dirty, dirty cheaters

Okay, maybe that's putting things a little too harshly, but the Redskins pulled a stunt several times in this game that helped make the Detroit offensive line powerless. And it all started on the very first offensive snap of the day. This example comes on a passing play, but this is just the most blatant and obvious example: 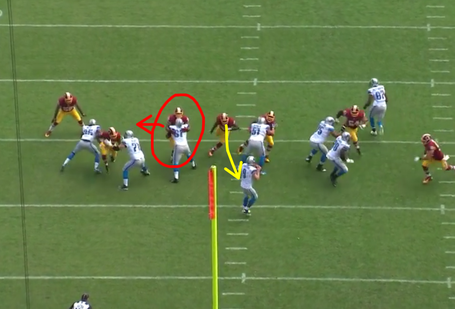 As you can see, the Redskins defender has Rob Sims in a bear hug. The idea here is to completely neutralize him, and drag him to the side. This way, the blitzing linebacker has a wide-open hole to get into the backfield, and Sims is powerless to do anything about it. The same concept can work for a running play. An offensive lineman may try to head to the second level to take out a linebacker, but if he's held by a defensive tackle, that linebacker is free to shoot into the backfield and disrupt the play early on. The Redskins were finally called for this penalty later in the game and scaled back on this tactic afterward.

2) The Lions were too slow getting to the second level

When the Lions weren't getting held, they were having trouble getting to the second level on their own. On this play, Corey Hilliard waits too long to disengage from his initial assignment, gets caught up and can't get a hand on the aggressive linebacker: 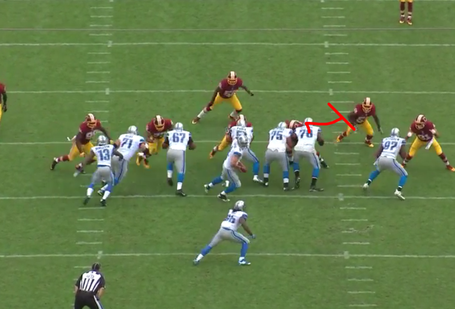 Hilliard and Larry Warford double team the defensive tackle. After Warford gets into position, Hilliard should shoot to the second level and clean out the linebacker. However, that never happens. 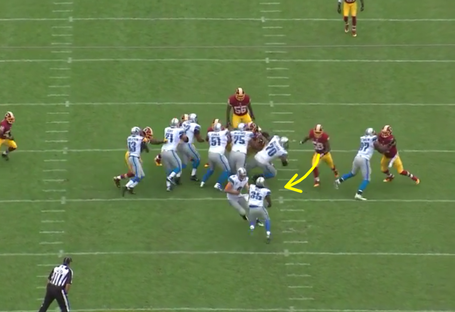 Warford never gets great position on the tackle, but Hilliard gets his feet caught up in the mess and is too slow to react to the linebacker, who gets into the backfield before Bell even has the ball in his hands. The Redskins linebackers played this aggressively throughout the entire game, and the Lions were consistently too slow to react.

3) The Lions offensive line was not on the same page

On two different occasions, I saw some frustration between Dominic Raiola and Sims. On the following play, both saw their responsibilities differently. 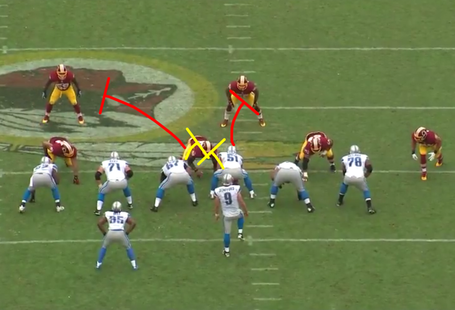 Both players believed they were supposed to help the other with the defensive tackle, then, once the other lineman had control of the situation, they would head to the second level. This is not how it works. One lineman needs to stay with the tackle and seal the hole while the other heads to take out the linebacker. Here's what happened: 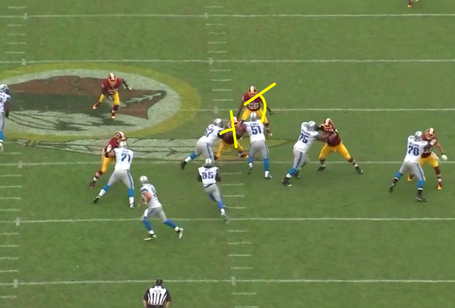 From Sims' perspective, the play is going well so far. He is pushing the tackle toward Raiola and is waiting for Dom to curl around to the left side of the defender and seal the hole from that side. When Dom does this, Sims will head to the second level and take out the linebacker who is closing in on the play at the top of the screen.

However, from Raiola's perspective, things are not going as planned. He needs Sims to get to the right side of the defender, but Sims is sealing the hole from the left side. Raiola decides he's going to go do his job anyway and heads to the second level. 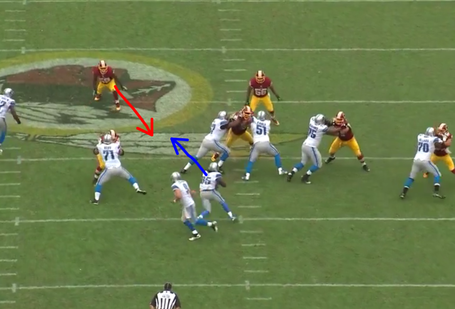 Joique initially decides to run left, but when he sees the unblocked linebacker closing in on him, he decides to cut it right. Since Sims is sealing his man on the left side, he has no leverage to the right and the defensive tackle makes the play for no gain.

It's impossible for me to know who had the play right and who had it wrong, but I can tell you this: both players thought they were in the right: 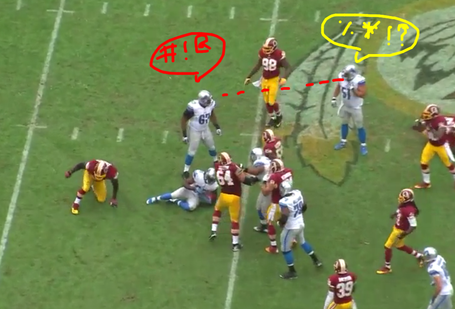 Overall, I thought Bell did what he could with the line play. A mixture of aggressive, smart play from the Redskins linebackers, communication errors on the Lions front line and a dash of cheating caused the Lions to stall on the ground on Sunday. It's clear this offense's strength is still in the passing game, and they have a ways to go before opponents will consider them a well-balanced offense.