Detroit Lions defensive coordinator Gunther Cunningham had some glowing praise for Ziggy Ansah following his standout performance in Week 3. A look at film should show us what Cunningham was talking about.

"He reminds me of some of the great players I’ve seen. With Ziggy, you really don’t notice it until you look at the tapes how many plays he’s made that are almost the side of impossible … People said he didn’t have football instincts, well, I guess if you grow up in Africa you get some instincts. I don’t know what he has but he finds the ball really quickly."

Before I go any further, I’d just like to say how pleased I am to welcome Gunther to CoachSpeak. Jim Schwartz, by virtue of his position, will provide most of the fodder for this column. But like most head coaches, Schwartz is a master of understatement; the guy can conduct an entire press conference and say literally nothing. Gunther, on the other hand, places no such restrictions upon himself. As defensive coordinator and a man who escaped Nazi Germany as a child, Gunther will say anything he pleases. Fortunately for Lions fans, what pleases him is spouting off little bits of delightfully insane hyperbole like this. When Gunther Cunningham gives quotes, everyone wins.

Anyway, onto Ziggy Ansah -- performer of impossible feats, possessor of instincts born in the tropical Ghanaian sun. Since you’re obviously as interested as I am to lay eyes upon his miracles, let’s take Gun’s advice and check out the tape.

More than his instincts and ability to locate the ball in traffic, what really jumps out from Ansah’s performance last week is his length and athleticism, the two primary reasons the Lions drafted him. His 2 sacks were nice plays, in that getting Robert Griffin III on the ground is a chore in and of itself. But Ansah owes a lot to Ndamukong Suh for one of those sacks, and the other came during a long-developing play at the end of the first half. Ansah made a few impressive plays in run defense, when his natural burst and long arms allowed him to make a couple plays that other defensive ends might not have. 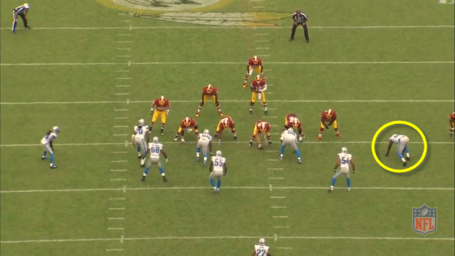 Here you’ll see Ansah lined up on the right side of your screen, far outside the left tackle. Washington is going to run a quick toss to Alfred Morris on the strong side. 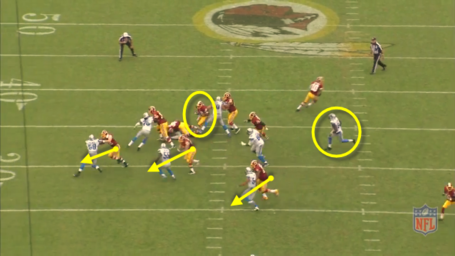 Notice how far away from the play Ansah is as it develops. After being slightly delayed by Suh, Morris turns upfield. Meanwhile, the Lions’ linebackers get swept out of the play entirely. DeAndre Levy (bottom center) is about to get absolutely abused by Trent Williams, and Nick Fairley (directly above Levy) gets cut, leaving Morris with a lot of room in front of him. 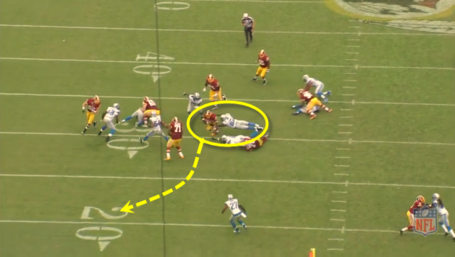 Ansah, true to Gunther’s word, goes full Superman, and manages to tackle Morris for a 4-yard gain. If he doesn’t, Morris is going right around Williams to bust a long run, and from this part of the field, probably a touchdown. Maybe Glover Quin cuts him off before that, but we’ll never know, because Ansah doesn’t let that happen.

Here’s another, and probably my favorite play from last week: 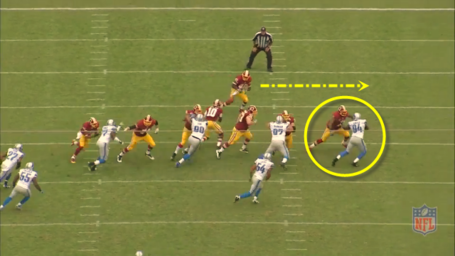 Washington runs a pretty basic toss sweep to Ansah’s side, leaving him matched up against Williams. Two first-round draft picks going at it one-on-one? Interesting battle. How did it play out? 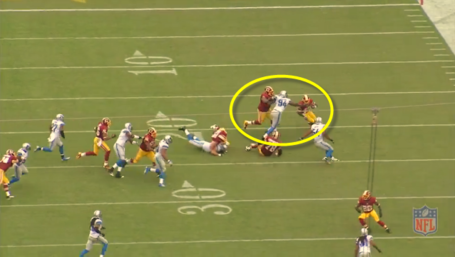 Ansah sets the edge, keeping his outside arm free in contain by never allowing Williams to reach him inside. Ansah stretches the play out all the way past the numbers before bringing down Morris for a 1-yard gain.

It wasn’t all positive, unfortunately, despite what Gunther would have you believe. As Jeremy Reisman illustrated after Week 1, Ansah still struggles to locate the ball at times, making him susceptible to play action. 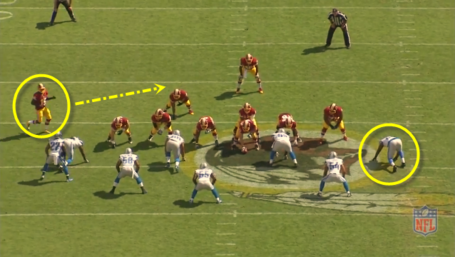 This is essentially the same offensive formation as the first play, only the wide receiver (No. 15, coming from the left) is motioning inside to run an end-around when the ball is snapped. 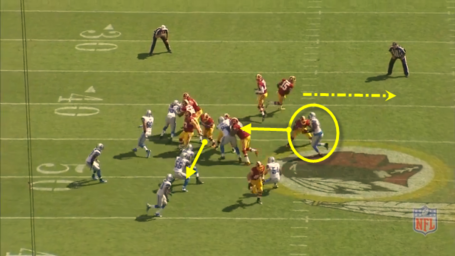 Washington runs a play-action pass here, faking the handoff to Morris off-tackle. The entire front seven buys it, including Ansah, who doesn’t even take a step into the backfield before coming across. Thankfully Washington didn’t actually run the end-around, because there is no one behind Ansah for a good 20 yards. (To be fair, it was a pretty impressive play fake.) Instead, Griffin III keeps the ball, and this is what it looks like when he delivers the pass: 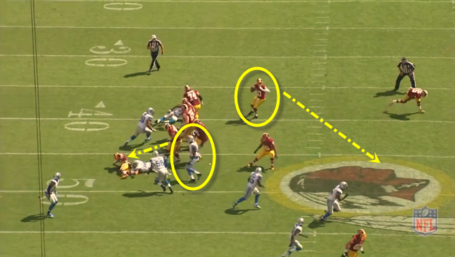 In what was one of the bigger reliefs of Sunday’s game, the Lions’ secondary covered well, and the result was an incomplete pass.

Ziggy Ansah has shown remarkable development through the first three games of his career, and the Lions’ coaching staff and fans have to be ecstatic about his quick ascension from "raw" prospect to legitimate starter, particularly with the loss of Jason Jones. He uses his top-tier size and athleticism to get himself in the position to make a lot of plays, and when he does, he shows the ability to tackle well in space.

What the Lions need is for that trend to continue. With the 3-0 Chicago Bears and Deadeye Jay Cutler (and I mean that not as a reflection of his accuracy, but rather his visible lack of human emotion) coming to Detroit, the Lions are going to need an impressive game out of Ansah and their front four to come out with a win.