Share All sharing options for: On Paper: Detroit Lions vs. Minnesota Vikings

On Paper is a weekly statistical preview article that has been featured on Pride Of Detroit for a few years now. Here's a quick recap of how it works, if you're new to the site:

Each chart represents one unit of a team (i.e.: Bucs Pass Offense, Lions Run Defense, etc.). Therefore, there are eight total charts (four units, two teams). Each chart lists the opponents the team has played, their performance that week and season averages to compare their performance for that week.

The purpose of this is because stats can be very misleading without the proper context. If the Lions give up 250 yards, 2 TDs and 1 INT through the air, that looks bad. But if it's against the Packers, which are (hypothetically) averaging 290 yards and 3 TDs, that is actually a very good performance. So if the team performs better than average on a given week, the cell is highlighted green; a bad performance is red. The color-coding system is based on the team being analyzed, so green doesn't necessarily mean good for the Lions. Confused? You can check out my past previews, but you'll get used it.

After analyzing each chart, I give a matchup edge to one team on a 0-5 scale. The scale is based not only on which team looks better in this matchup, but how likely this edge will affect the final outcome of the game. A +5 advantage would predict that this matchup is key and likely to win the game for the team.

The only difference now is that I have added a yellow color in the charts if a performance is within +/-5% of a season average. Also, because I don't have any 2013 data yet, I'll be using 2012 statistics for the first few weeks. 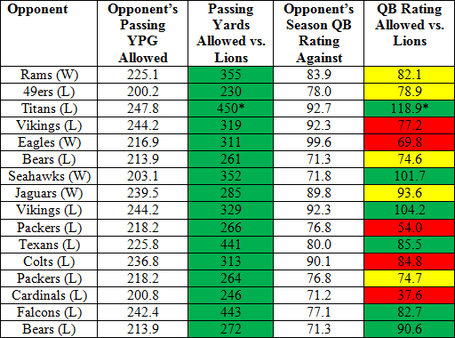 The left column doesn't really say much about the Lions pass offense other than they throw the ball a lot. In fact, the Lions attempted almost 70 more passes than any other team in the NFL last year. The right column is a little more telling of how efficient the Lions pass offense was. They outperformed averages in six games, met averages in five games and underperformed in five games. In other words, they were about average in passing efficiency. That may be surprising considering the records Matthew Stafford and Calvin Johnson set last year, but most of those records were the result of the high amount of passing attempts.

This year, the Lions are hoping for a healthy Ryan Broyles and Nate Burleson, but are without the troubled Titus Young. Reggie Bush will also add a dimension to the passing game the Lions haven't had since Jahvid Best was healthy. Overall, however, I expect the Lions to have a similar passing game that they have had in the past two years: racking up yards, while struggling with completion percentage and red zone efficiency. 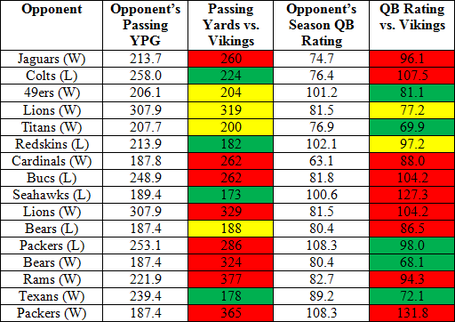 The Vikings had a lower-than-average pass defense last year. In 12 games last year, opponents met or out-gained their season yardage average against the Vikings. In 10 games, they met or out-performed their passer rating average.

However, the Vikings did excel at pass rush. Their 44 sacks ranked tied for fifth overall. They may be without defensive tackle Kevin Williams, but Jared Allen vs. Riley Reiff is a troublesome matchup for the Lions.

The good news is that the Vikings no longer have Antoine Winfield, who served as their rock in the secondary. They did add Xavier Rhodes through the draft. Overall, I think the Vikings will sport a similar pass defense, but may suffer from the loss of Winfield.

Player to watch: Allen. He is the biggest impediment between a successful day and a disastrous game for Stafford and the offense. Allen occasionally gave Jeff Backus fits, and it's hard to imagine Reiff dominating that matchup in his first year as a starting left tackle.

Advantage: Lions +2. The Lions pass offense hasn't been as good as most people think, but they still hold the slight advantage in the matchup. Because the Lions pass so often, the effect of this advantage is magnified a bit. I expect around 300 yards passing with one or two touchdowns. 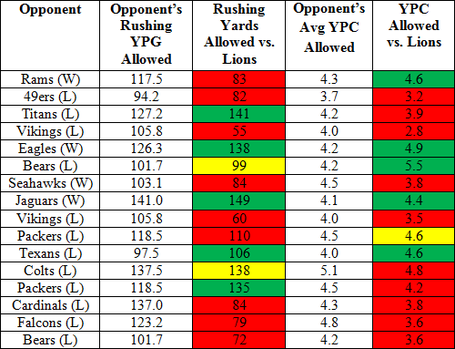 The Lions run offense was pretty poor last year. Without a back who was a threat to break out a big run, the Lions sputtered to a mere 4.1 yards per carry (tied for 18th). They did show a fair amount of success running in the red zone, totaling 17 rushing touchdowns (tied for seventh).

This year, the Lions have their long run threat in Reggie Bush. However, Bush struggled to display much of anything in the preseason, averaging just 1.2 a carry. Additionally, the Lions will be starting three different players on the offensive line from last year. Bush has a high tendency to give up on a hole between the tackles and kick it outside. This is going to result in a lot of negative yards, but with some huge plays mixed in between. 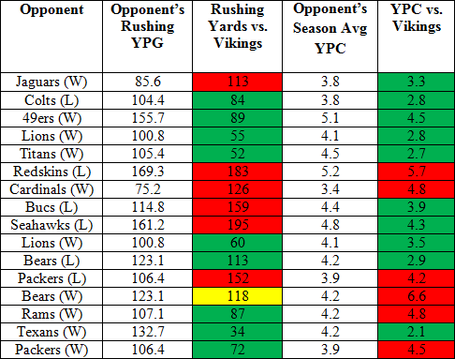 This unit will obviously be hurt by the absence of Williams, if he can't give it a go this week. However, the Vikings have a strong core of linebackers, including Chad Greenway, who led the Vikings in tackles in 2012 and had the second most in the league.

Player to watch: Larry Warford. The presumed rookie starter at right guard will have to learn on the job quickly, as the Vikings have a formidable defensive front. Warford will likely have a target on his back, and his reaction will be key to the success of the Lions running game.

Advantage: Vikings +1. The Lions will not be relying a lot on the running game, because it's clear that the Vikings hold the advantage in this matchup. However, if they can get just one breakout run from Bush, they may consider it a success. 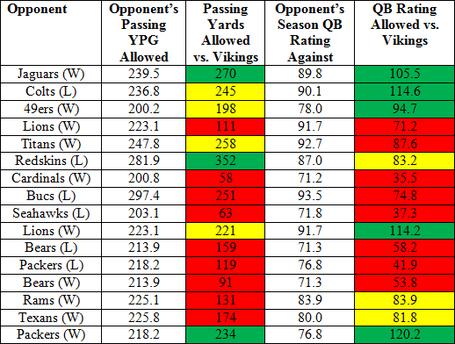 After a very promising start to the season, Christian Ponder fell off the map in 2012. Overall, he finished with a somewhat respectable 81.2 passer rating. However, he averaged just 6.1 yards per pass attempt, which ranked Minnesota second to last.

The Vikings have struggled to find a solid wide receiver core to support the young Ponder. After parting ways with Percy Harvin, the Vikings drafted Cordarrelle Patterson and snagged NFC North veteran Greg Jennings. Patterson offers the Vikings another speedy option in the passing game, while Jennings will serve as the Vikings' No. 1 receiver.

Ponder's favorite target, however, is tight end Kyle Rudolph, who was targeted more than any Vikings receiver last year. Rudolph collected half of the Vikings' passing touchdowns last year (8). 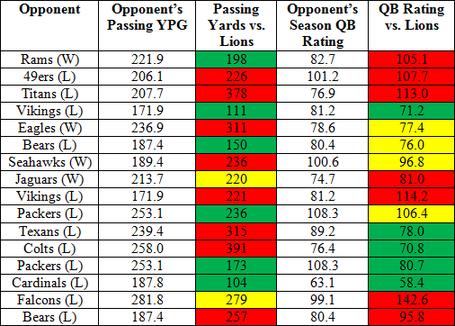 The Lions pass defense was actually about average last year. This year, it should only be improved. The Lions have added rookie Darius Slay and veteran Glover Quin to their secondary. In addition, the Lions have a healthy Bill Bentley and Louis Delmas ("healthy" by Louis Delmas standards).

But the strength of the Lions pass defense is their pass rush. The Lions have turned over their entire defensive end unit, to their advantage. While the loss of Cliff Avril may hurt, the additions of Ziggy Ansah, Jason Jones and Israel Idonije should more than fill the hole left by him and Kyle Vanden Bosch.

The biggest question for the Lions will be their linebackers' ability to drop into coverage. This could prove crucial in the matchup against a team that likes to dink and dunk their way down the field.

Player to watch: Ansah. If he plays, the spotlight will be on him. With Ndamukong Suh and Nick Fairley drawing a huge amount of attention, Ansah is entering an ideal situation as a rookie. If he can get consistent pressure on the quarterback, this defensive line may be unstoppable.

Advantage: Lions +1. Though Ponder was efficient against the Lions in their second matchup last year, he should struggle on Sunday. The Lions will be improved both in pass rush and in the secondary. However, this matchup is not key to the overall game. The Vikings attempted the fifth fewest amount of passes last year. 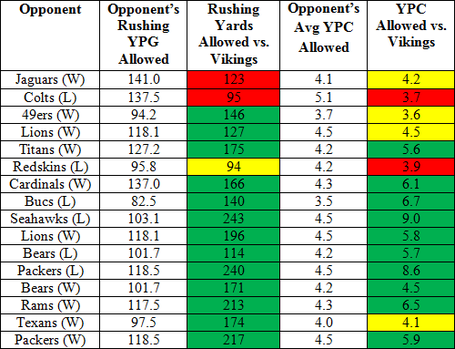 This week in "Obvious Things are Obvious": Adrian Peterson is good. There's not really a lot else to analyze here. Peterson is going to get his yards. The Vikings are bringing back the same offensive line from last year, so not much should change in the Vikings run game. 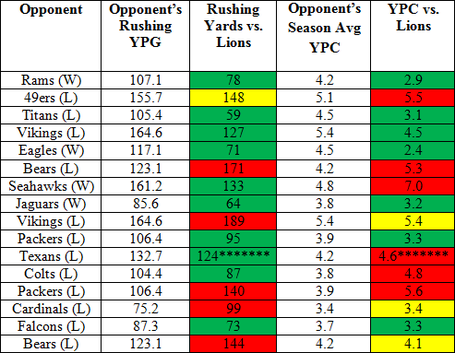 The Lions were wildly inconsistent against the run last year. At times, they were absolutely dominant (see: Eagles game), but the Vikings and Bears ran all over them. Overall, they were slightly above average. They held 10 opponents below yardage averages and seven below yards per carry averages.

Again, linebackers will be key in this matchup. If they can stay true to their gaps and tackle well, the Lions have a chance to hold strong. Also, Quin and Delmas are both solid in defending the run and will help in preventing 15-yard gains from turning into Peterson 40+ yard scampers.

Player to watch: Stephen Tulloch. Tulloch's leadership in the linebacking core will be key to stopping Peterson. The defensive line should give them clear lanes to make tackles, but if the linebackers don't keep up their end of the bargain, it could be a long day for the Lions defense.

Advantage: Vikings +1.5. I think the Lions have a chance to keep Peterson in check in the matchup, but they'll have to be nearly flawless in tackling. In the end, Peterson is going to get his.

Home field. Home field advantage hasn't been of much help to the Lions as of late, but with the excitement of opening week, Ford Field should be loud on Sunday. The Lions have won their past two home openers, which is a pretty impressive streak by Lions standards.

The Lions have a slight +0.5 advantage on paper. The game comes down to which team's defense can stymie the opponent's offensive strength. Will the Vikings be able to slow down the Lions passing offense or will the Lions hold Peterson in check? I actually think both defenses have a good shot at accomplishing those goals. Therefore, I am expecting a low-scoring affair. The Lions squeak out a big division win to start the year: Lions 19, Vikings 16.