Jim Schwartz recently mentioned that the Detroit Lions' defensive line will run the same scheme, but with different looks because of the size at defensive end. Here's a peek at what some of those looks might be.

Share All sharing options for: CoachSpeak: Jim Schwartz on the Lions' defensive line

Earlier this week, Jim Schwartz was asked how changes in the Detroit Lions’ defensive line might help bottle up reigning NFL Offensive MVP and destroyer of worlds Adrian Peterson. Here is what Schwartz had to say:

While the Lions aren't necessarily as deep at defensive tackle as they were in 2012, the press is obviously asking about the personnel changes at defensive end. And, when Schwartz discusses scheme for the team's DEs, we all know what he's referring to. It's every Lions fan's favorite topic this side of Matthew Stafford's mechanics: the "wide nine"! The concept became a buzzword synonymous with the Lions' and Philadelphia Eagles' defenses last season, and was broken down in detail enough times that any quick search should yield an explanation of its basic tenets. (My personal favorite was done here by Smart Football.)

If you're not in the mood to read a full breakdown, or if you've selectively repressed memories of the 2012 season, a quick reminder: Defensive line alignment works on a numerical scale going outward from directly above the center. The "nine" technique lines up over the outside shoulder of the tight end. Thus, the "wide nine" refers to a defensive end lining up with a larger cushion outside the offensive line, where he can pin his ears back and go all-out rushing the passer.

For an example of what this looks like, consider this play from 2012: 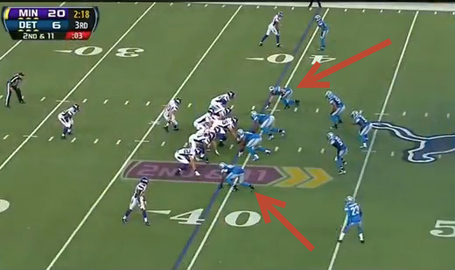 Notice how far outside both Kyle Vanden Bosch and Cliff Avril are lined up here. They have enough of a cushion that they could almost cover slot receivers. And, judging by how they defended the run last year, maybe they should have. Per Pro Football Focus, among 4-3 defensive ends who played at least 50 percent of their team's snaps in 2012, Vanden Bosch and Avril were the worst and third-worst, respectively, against the run. The wide nine may encourage upfield penetration at the expense of the run, but that is staggeringly awful. And, as the DEs went, so too did the rest of the team -- PFF graded the Lions as the fifth-worst rush defense in the NFL last season with a -32.6.

Enter those new defensive ends the press is asking Schwartz about; you know, the ones with the size. Assuming Ziggy Ansah and Jason Jones are the Week 1 starters, they'll have 2 inches and 10 to 20 pounds on Avril. (When it comes to Vanden Bosch, the most meaningful difference in measureables is the 7 to 10 years Jones and Ansah will have on him.) Factor in 6'5 Israel Idonije and the 6'8 (!) Devin Taylor and you're looking at a larger position group across the board. Schwartz makes a point to reference their size in his quote (as he has throughout the offseason). They're bigger! They're stronger! They're more suited to defend the run at even a pedestrian level!

So, if Schwartz is telling the truth, and the Lions' DEs will still be playing in the "wide nine" technique, how will the scheme look different this year? Let's see if the 2013 preseason can give us any hints: 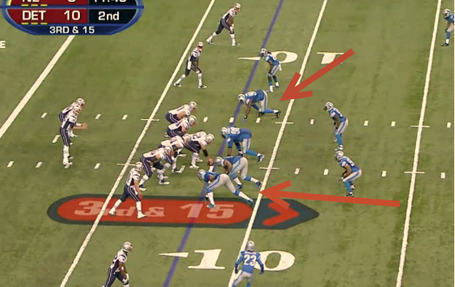 And, another (ignore the vanishing graphic): 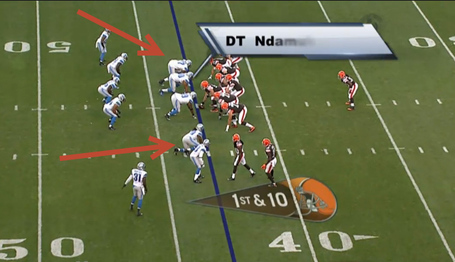 At right defensive end, you see Ansah or Willie Young lined up in a fairly typical "wide nine" alignment, similar to where Vanden Bosch lined up for plenty of snaps in 2012. The left end is where you'll notice a difference -- the defender is lined up much closer to the center of the offensive line, almost over the offensive tackle. A trip through the Lions' preseason highlight reel is going to show a lot of this. The players you'll see lined up here most often are Jones, Idonije and interestingly enough, Ndamukong Suh.

A lot has been made over the past couple seasons about the possibility of Suh taking snaps at defensive end, but this may finally be the year in which we see what he can do lined up outside. Remember, both Jones and Idonije have experience lining up at defensive tackle; Schwartz has mentioned their versatility as reasons for signing them. The Lions may have gotten bigger at defensive end this offseason, but in the process, they've also gotten more athletic at defensive tackle, which should provide the Lions with more opportunities to move Suh around on the line, particularly since it wouldn't require a specialized personnel group (like Gunther Cunningham's "Grey" formation from last year) to do so.

What implications does this altered alignment have for the Lions rushing defense in 2013? Obviously, you can't draw many meaningful conclusions from the preseason, but there are encouraging signs: The Lions' defensive average of 79.5 rush yards/game ranked third in the NFL during the preseason, and that includes the 132 yards gained on the ground by the Buffalo Bills in Week 4. (For consistency's sake, Pro Football Focus graded them out at a very respectable +26.3, which would have been good for 11th in the NFL.)

None of this is to say that the 2013 Lions are ready to come in and become an overwhelming force against the run. The right defensive end is still going to be out on an island, and Schwartz seems content to use a rotation of Ansah and Young at that spot -- getting a pass rush from the edge is going to require either an immediate leap from the former or a long-awaited leap from the latter. The Lions also didn't play Adrian Peterson in the preseason; while Stevan Ridley and Trent Richardson are certainly capable backs in their own right, neither one is on the same plane of existence as AP.

Whether or not the Lions' adjustments on the defensive line will improve their run defense remains to be seen. But, after 2012, there's nowhere to go but up, and it all starts on Sunday.