Share All sharing options for: Lions preparing to send plane to San Diego for Ken Whisenhunt?

It appears that the Detroit Lions are getting ready to send a plane to San Diego, likely to pick up coaching candidate Ken Whisenhunt. Dave Birkett reported on Monday afternoon that the Lions "had a plane ready to go to San Diego this morning," but it hasn't actually taken off. Confirmation of this news comes in the form of FlightAware.com, which shows this: 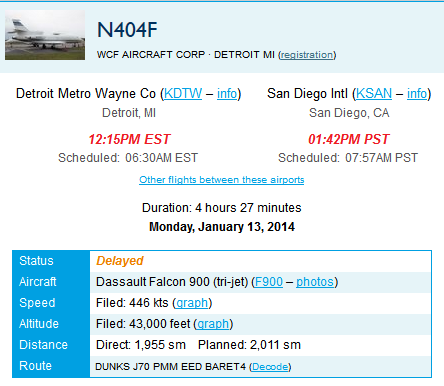 Yes, a plane owned by WCF AIRCRAFT CORP (WCF = William Clay Ford?) is scheduled to fly to San Diego, but the flight is currently delayed. Does this mean the flight isn't actually going to happen? Are the Lions simply waiting for Whisenhunt to finish up his meetings with the San Diego Chargers before sending the plane? I'm not really sure, but keep an eye on what this plane does over the course of the next 24 or so hours. If it does indeed head to San Diego and return to Detroit, chances are Whisenhunt is their guy.

UPDATE: The scheduled flight to San Diego has disappeared. Hmm...

UPDATE II: And now a new flight has been scheduled for San Diego.