Our countdown of the Detroit Lions' top 10 plays of 2013 begins with Nos. 10 and 9, starring the two biggest playmakers on each side of the ball.

As I crudely pointed out last week, 2013 wasn't exactly a season to remember for Detroit Lions fans. However, it was a season rife with emotional moments, unbelievable sights and extremely athletic plays. So in the upcoming days, I will be counting down the Lions' top 10 plays of 2013. Instead of just listing the moments, I want to put them in their proper context and break down what happened to make these special moments possible. Because I had trouble knocking this list down to 10, I'll also include a bonus "honorable mention" moment that just barely missed the list. But enough preambling, let's get to the list:

10. Calvin Johnson takes a harmless slant to the house opposite Patrick Peterson

The countdown kicks off with Megatron getting the better of one of the best corners in the league.

Detroit's offense was having a rough time against a tough Arizona defense, having gone three-and-out twice in its first three drives of the game. That all changed with one of the simplest plays the Lions ran all season. 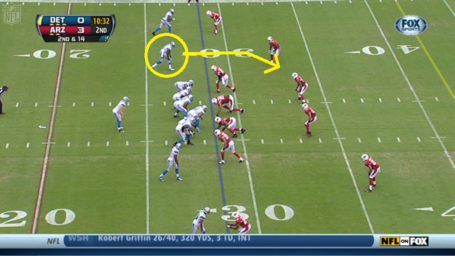 The Lions lined up Calvin in the slot, something they (rightfully) played around with all year. With Peterson lined up opposite Johnson, they ran a simple slant over the middle. But the key to this play was not Peterson, it was the linebacker lined up next to him.

The linebacker reads the play almost immediately. He makes a break for the ball and nearly picks it off. However, Matthew Stafford throws his fastball and blows it right by the linebacker. 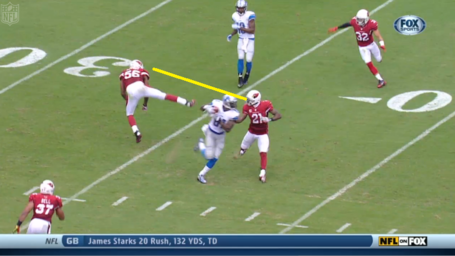 With the linebacker whiffing in dramatic fashion, Peterson is left wondering what exactly just happened. He's in position to take Calvin down for a mere 8-yard gain but can't believe that Johnson actually has the ball. He looks back at the linebacker, assuming he must have the ball. By the time he realizes that Stafford had somehow teleported that ball through the defender, it was too late and Calvin was uncatchable. The Lions took a 7-3 lead (which they lost on the next drive of the game).

Levy had at least half a dozen plays that I considered putting on the list this year. He was, by far, the Lions' biggest playmaker on defense this season. I really wanted to include him on this countdown numerous times, because even with all of the attention he received this season, I don't think it was enough. Unfortunately, I could only squeeze Levy in here at the bottom of the list.

I chose this particular play because it displays Levy's two best qualities: his instincts and his athleticism.

Undeterred by any jukes or fakes, Levy sticks with the running back with relative ease. Then, he elevates way above the back and perfectly snatches the ball at the highest point of his leap.

But let's back up a little bit. This play doesn't happen without the help of Detroit's other big defensive playmaker: Ndamukong Suh. Suh is lined up at defensive end on this play and just physically dominates the offensive tackle, driving him back several yards. After setting him off balance, Suh throws him to the side and forces Weeden into a quick decision. 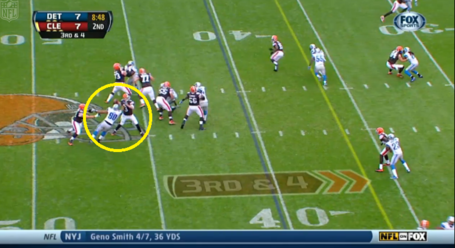 Somehow, Suh fails to get a hand on the ball or the arm, but Weeden feels the pressure and forces a throw.

Levy does the rest: 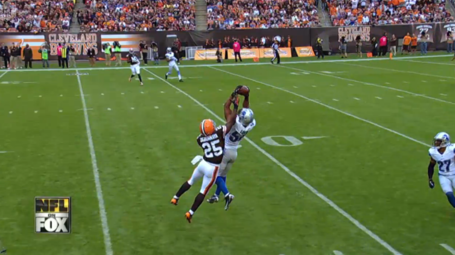 Just look at that. I want this screengrab made into a Fathead, and I want to wallpaper my entire house in it. The fact that Levy can out-jump a running back (okay, it's only Chris Ogbonnaya, but still) and then make an extremely impressive grab is really a testament to how good this guy is.

Our first honorable mention is another play from Lord Calvin. This time, the play came in Pittsburgh, when the Lions were disappointingly down 17-3 early in the game.

One of the reasons this play didn't make the countdown was how nonchalant everyone looked. Stafford effortlessly evades pressure and just tosses up a prayer to Calvin, who easily catches it. Then Johnson simply flings off the defensive back and just trots into the end zone. No big deal. This play looked like something you'd see during a non-contact drill in training camp. Still, it was pretty impressive, and it was a big play that led to a 27-point second quarter.