Our countdown of the Detroit Lions' best plays from 2013 continues with Nos. 8 and 7.

The next two plays on our countdown came literally from the hands of two unexpected heroes. 2013 was a year in which much of the Detroit Lions' success came from their big playmakers: your Calvin Johnsons, Reggie Bushes and Ndamukong Suhs of the world. But when the Lions were really rolling this year, they were getting contributions from their role players, who seemed to step up at just the right time.

Maybe it's not fair to qualify Pettigrew as a role player; his ceiling was always considered much higher. But after a rough 2012 season and a slow start to 2013, Lions fans were ready to show Pettigrew the door. However, with a diminished role the rest of the season (in 2013, Pettigrew had the fewest amount of targets since his rookie season), Brandon seemed to thrive. He caught over 64% of passes thrown his way, more than 3% above his career average. None of his catches were more impressive than this one against the Tampa Bay Buccaneers.

The play was one Scott Linehan loved to run in the red zone, a simple seam route up the middle. Though this play didn't have the usual wrinkle of play-action, it worked nonetheless.

The play design isn't what is on display here. Instead, it's Pettigrew's incredible catch. The first thing he does is reel the ball in with one hand. 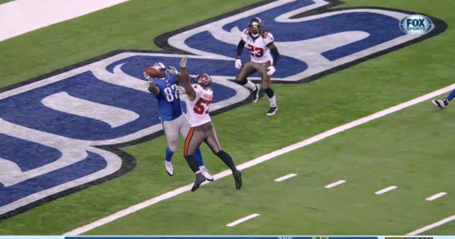 With a linebacker all over him (and in his line of vision), this is an incredibly difficult task. But Pettigrew manages to pull it in. However, he wasn't done there. 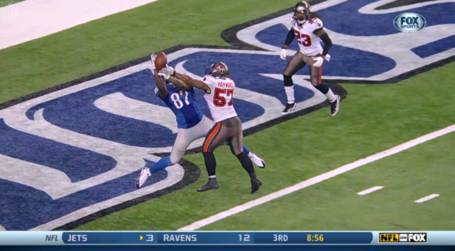 The linebacker gets a hand in and bats at the ball. Here's where bad Pettigrew usually takes over. In the past, he had trouble recognizing when contact was coming and holding on to the ball throughout. Here, Pettigrew loses the ball momentarily, but quickly recovers and gathers the ball impressively. The catch gave the Lions a lead early in the second half, a lead the Lions would hold until... well, let's not talk about that.

7. Matthew Stafford connects with Kris Durham on a 40-yard rope, setting the stage against Dallas

If this countdown was a Stafford-only list, this play may be No. 1. It remains the most impressive pass I've seen Stafford make in a Lions uniform. But let us remember how we got there first.

The Lions, four turnovers deep, found themselves in a desperate situation late in the fourth quarter, despite outgaining the Dallas Cowboys by a huge margin. Without any timeouts to stop the clock, Detroit was left helpless as the Cowboys, leading by three, faced a third-and-14 with just 1:14 left. A simple running play would have run over 40 seconds off the clock, leaving the Lions with no more than 20 seconds left to erase a deficit of three (or six) points. However, an untimely holding penalty stopped the clock. The Lions declined the penalty, essentially ceding another three points in exchange for the assurance that the Cowboys could not run any more clock.

The Lions had 80 yards to go, and just 62 seconds to do it... with no timeouts. After three plays (spike included), Detroit found itself still over 60 yards away, and now with just 40 seconds left. They needed a big chunk of yards, and they needed it now.

There are so many great things about this play, but let's start with something we rarely see from Stafford: good footwork.

First, Stafford avoids the pressure coming from the inside and escapes to his right. His target, Durham, is on the left side. This is where bad Stafford would simply try to use his powerful arm to throw it across his body, despite an extremely high degree of difficulty. Instead, Stafford quickly sets his feet and shifts his body toward the target: 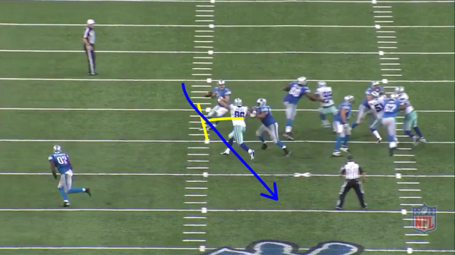 Notice how Stafford stopped his momentum and lined his feet toward his target. This stance gives him all of the power needed for a nearly impossible throw. How impossible? Pretty damn impossible. 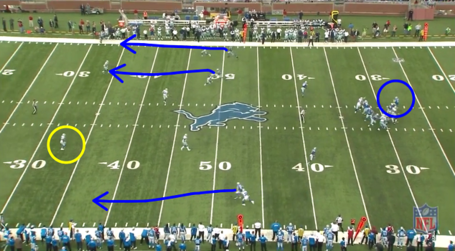 The key to this play is the circled safety. Because Stafford rolled to his right, the safety slowly faded toward the center of the field, and you can see his body is squared to the inside of the field. His responsibility is to cover deep zone on his side, but at this point, he figures there is no way Stafford could get away with a pass down the left sideline. But Stafford unleashed a pass that only a handful of people on this Earth could throw.

On my site, I broke down just how long this pass was. On paper, it was a mere 40-yard gain. But considering Stafford threw this pass from the opposite hash mark and using a little math, I calculated this throw at 50.34 yards through the air... on a rope... hitting Durham in perfect stride. Oh, and he perfectly splits three defenders: 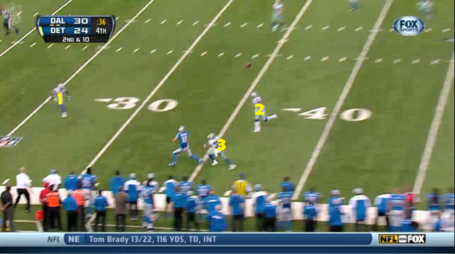 On top of everything, the perfectly laid pass allowed Durham to pick up a few extra yards after the catch and easily bounce out of bounds, stopping the clock. The Lions now had just 23 yards to go in 33 seconds, a not-so-impossible proposal. Just two plays later... eh, let's save that for later.

Thanksgiving Day may have been the highlight of the entire season for the Lions. They finally put their Turkey Day losing streak to an end, against the division rival Green Bay Packers no less. The day was full of highlights, but it was another unlikely hero who put the cherry on top of this holiday sundae. Kevin Ogletree's one-handed grab was an impressive display of athleticism, but not enough to make the cut.