The countdown of the Detroit Lions' top plays of 2013 continues with two very different and very impressive plays.

Our next two plays on the countdown are polar opposites. One was a play that clearly was going to decide the game. The other, a seemingly unimportant play in the middle of the third quarter. One was a display of how the play of one person can change an entire game; the other, an example of how teamwork can produce explosive results. And the stars of each play, Nick Fairley and Reggie Bush, well, let's just say they have different body types.

6. Nick Fairley blows up Matt Forte in the backfield FTW

The season was slowly slipping away (you know, before it actually did). The Detroit Lions were in prime position to complete the season sweep of the Chicago Bears and take a huge lead in the NFC North. But that all seemed to be fading away into a Kool-Aid fueled pipe dream when Josh McCown easily drove the Bears to a last-minute touchdown. But Chicago was still a 2-point conversion away from sending the game into overtime (which I am still convinced they would have won on some devastating, fluky play). But we would never see such an overtime.

The play call from the Bears was a bit curious. Forte was averaging less than 2 yards a carry on the day, and he hadn't had a rush of over 7 yards all game. But the Bears didn't need 7 yards, they needed just 1. So they went shotgun, spread out their receivers and tried to run up the gut. Bad idea. 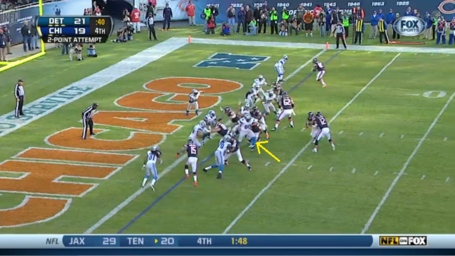 Before Forte even gets the ball, Fairley has split two linemen and has free rein into the backfield. Fairley doesn't even have to fully wrap up Forte to take him down. What's really interesting about this play is that the Lions may not have even needed Fairley's help on it. 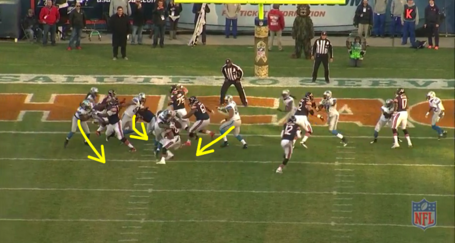 DeAndre Levy had shed his block and was heading to the backfield. Meanwhile, Willie Young had sealed off the edge, while Ndamukong Suh blocked any hope of a cutback lane. Forte had no chance.

The Lions won the game because of this play and took a commanding lead in the NFC North. And they all lived happily ever after.

5. In his Lions debut, Reggie Bush takes a screen 77 yards for six

The Lions made national headlines with their offseason acquisition of Bush. Hopes were that Bush would add the explosive element to Detroit's offense that had been missing since Jahvid Best was forced into retirement by concussions. It didn't take long for Bush to convince the Lions they had made the right choice.

This was just a perfectly executed screen. 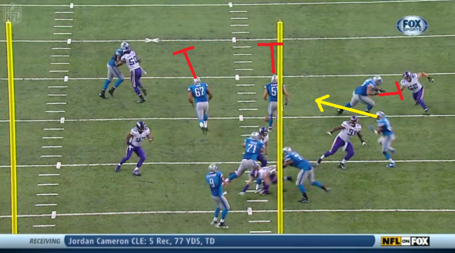 Immediately Rob Sims, Dominic Raiola and Larry Warford get downfield (but not too far downfield to draw a penalty). As Matthew Stafford lays a nice pass to the cutting Bush, Reggie has a cavalcade of blockers in front of him.

But Reggie doesn't even need those blockers. He turns on the turbo jets and runs past everybody. Bush is running so fast, you can easily imagine that blurred No. 25 on the back of his jersey is really a No. 44 and suddenly I'm back in 2011 and everything with the world is good again. 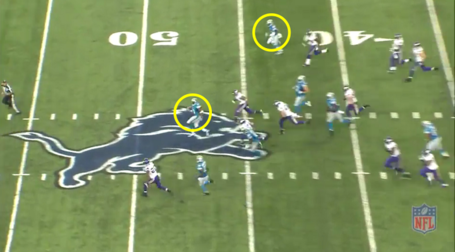 But Edwards quickly closes in on Bush, and it's a photo finish: 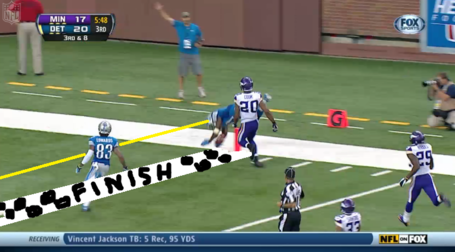 Bush leaps at the last second and beats Edwards by the nose of the football. Sadly, shortly after the race, Edwards was put down and never heard of again. Tough break, kiddo.

Our third honorable mention comes from DeAndre Levy, who broke into the countdown earlier. This play was not nearly as physically impressive as our No. 9 play, but it was Levy's first trip into the end zone since 2010.

Levy's pick-six was a huge play in a close game. But I couldn't in good faith sneak it into the top 10, because this was just a terrible decision by Carson Palmer.