We have finally reached the end of this glorious journey through 2013. Okay, maybe "glorious" isn't the best word to describe the 2013 Detroit Lions season, but it undeniably had some great moments. When I started compiling the list, I had no trouble finding 10 plays, and I had even less trouble determining the top two plays. Both of these plays were made by the Lions' top leaders in crunch time. It was obvious to me these two plays would both top the list; the only difficulty was choosing the play that would have to ride shotgun to the other.

Though the play was clearly the most unbelievable moment of the year, Stafford's bold decision to sneak the ball in lieu of a spike was not enough to top our list.

This play had almost everything, however. With the clock frantically ticking down, and everyone not named Riley Reiff scrambling to the line of scrimmage, Ford Field was tense with excitement and disbelief. 22... 21... 20... The Lions were finally getting set, but, OH NO, they didn't have a left tackle. Stafford whipped his head around searching for his blind-side protector, and when his eyes -- filled with fury -- met Reiff's, he let out a tribal screech:

Reiff responded with an impressive 40-yard dash, somehow stopping his momentum perfectly at the line of scrimmage. As Stafford finally pulled up behind center, screaming "CLOCK, CLOCK," he took one short look into the Dallas Cowboys' defense, lowered his head for the snap and...

And my personal favorite:

Here's a sad Cowboys fan. Here's a very, very NSFW video of a not-so-gracious winner (which includes a Cowboys fan who clearly doesn't know the meaning of a thumbs up).

The only thing this play was missing was a display of impressive athleticism. Our top play of 2013 is certainly not lacking in that category.

No words can describe this play; just watch. 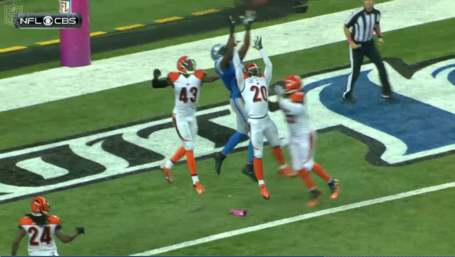 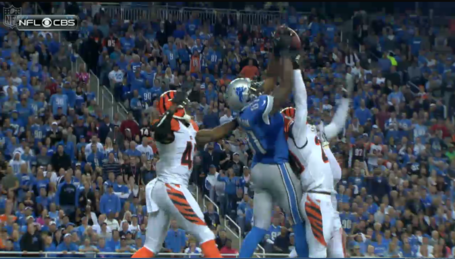 Hey, Bengals Linebacker Who Was Just Embarrassed on Live TV, what are your thoughts on the play? 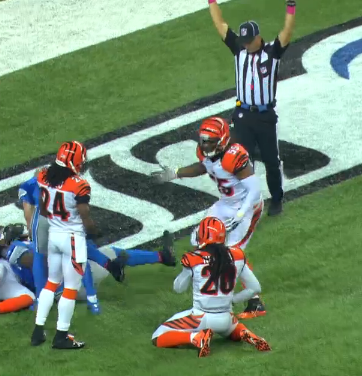 The final play that just missed the countdown features Detroit's terrible twosome: Ndamukong Suh and Nick Fairley. When the Lions drafted Fairley, this is the image that immediately went swirling through Lions fans' heads:

The double stunt by Fairley and Suh works to perfection, creating a symmetrical strip-sack touchdown, against the Chicago Bears, no less.

So there you have it. In a season we are all eager to bury deep in our subconscious, there were actually a plethora of exciting moments and big plays. Here's a quick rundown of the top 10: