We break down the season's biggest game the only way we know how: On Paper.

Share All sharing options for: On Paper: Super Bowl XLVIII, Broncos vs. Seahawks

It's Super Bowl time again, so you know what that means. No, it's not time to start making your first Detroit Lions mock draft. It's time to give the biggest game of the year my "On Paper" treatment!

If you aren't a Pride Of Detroit regular and don't know what's going on here, let me break it down quickly. The purpose of On Paper is to take statistical performances from a game-to-game basis and compare it to overall season averages. So a 300-yard passing performance may be considered good, but On Paper strives to put that performance in perspective based on the defense's season average. From there, I develop charts based on whether that unit's performance was above or below season averages, and I try to draw conclusions off of those charts. It may sound confusing, but it's actually quite simple. So let's jump right into it.

Note: All statistics shown are from the regular season only, unless otherwise stated. 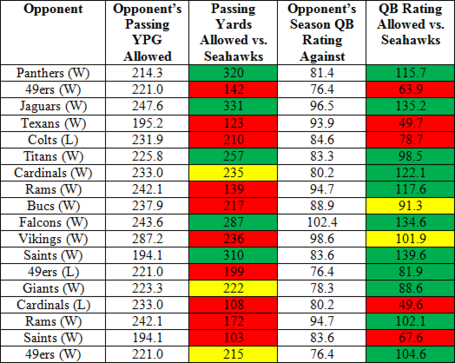 Don't be fooled by the low ranking and the poor left column; the Seahawks pass offense is a real threat. Though they've only outgained opponents' averages on five occasions this season, they have surpassed passer rating allowed averages in 11 games.

Of course, the real reasoning behind the low rankings is simply attempts. Seattle attempted the second-fewest passes in the entire NFL this season, so it would stand to reason that their yardage numbers are also very low. Instead, let's look at some statistics on a per-pass basis. Seattle is averaging 8.4 yards per attempt (second-best), earning a first down on 38.1% of their attempts (fourth) and has a completion percentage of 63.6% (ninth). All of that culminates in a fifth-best passer rating of 102.7 on the season. Russell Wilson may not throw the ball a lot, but when he does, he gets the job done.

The primary weakness of this passing offense has been protection. Despite throwing the ball so infrequently, the Seahawks have been sacked the 10th-most this season (44 times). Wilson's propensity to hold on to the ball too long contributes to this problem, but it goes beyond that. The Seahawks dealt with numerous injuries all season along the offensive line, and it showed. However, Seattle is entering the Super Bowl as healthy as ever on the offensive front. 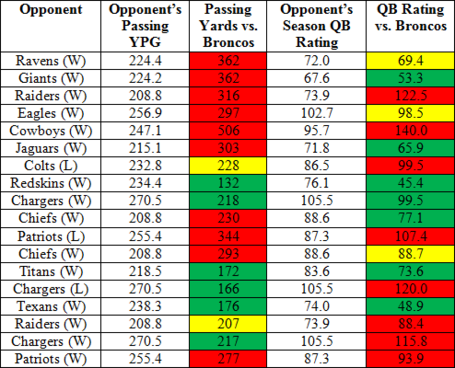 It's not all that surprising that the Broncos have given up a lot of yards through the air. Having a quick-paced, high-scoring offense is going to cause your defense to face a lot of passes. In fact, the Broncos have seen the sixth-most passing attempts in the league. What is a bit surprising -- and concerning for Broncos fans -- is the high passer rating allowed. Eight of 18 opponents surpassed their passer rating averages against the Broncos, including four of the past five.

The key to this matchup for the Broncos will be tallying sacks. Denver has the 13th-most sacks in the league (41), so they are certainly capable. But the Broncos can't afford to just pressure Wilson; they need to make sure they finish the play with a sack. According to Football Outsiders, Wilson averages 7.6 yards when out of the pocket, second-best in the NFL.

Player to watch: Percy Harvin. Harvin is the big unknown in this game. Having played in just one game during the regular season, no one is sure how Harvin will fit into the Seahawks offense. But as Lions fans can attest, Harvin has big-play potential.

Advantage: Seahawks +1.5. In addition to the clear advantage here, the Seahawks are also remarkably healthy, while the Broncos are ailing. Denver's best defensive back, Chris Harris, was lost earlier in the playoffs for the rest of the season. And while Champ Bailey is enjoying a nice resurgence in his career, I don't think Denver's secondary can keep up with the likes of Golden Tate, Doug Baldwin and Harvin. 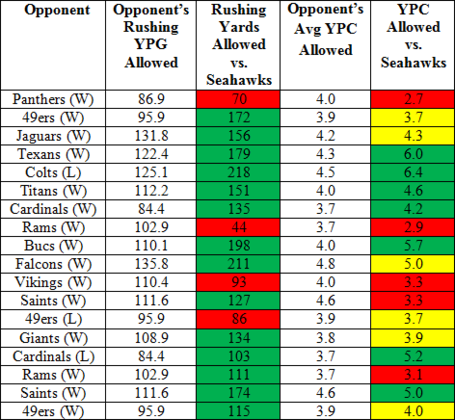 Seattle's real bread and butter on offense goes through one Marshawn Lynch. Lynch and the Seahawks outgained defensive rushing yard averages in 14 of 18 games, although they only outgained yards per carry averages in seven of those 18.

Again, this disconnect comes down to attempts. Seattle has attempted the second-most rushes in the league, so their high ranking is a bit inflated. In reality, the Seahawks are averaging a mere 4.3 a carry (t-12th) and are gaining first downs on 22.8% of rushes (t-12th). So Seattle isn't quite as efficient running the ball as most are letting on. Still, to have above-average numbers while running the ball as often as the Seahawks do remains impressive. 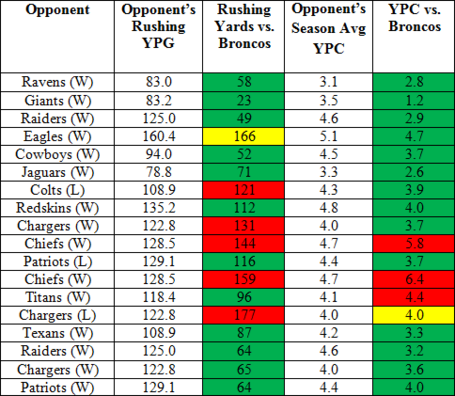 Perhaps one of the most under-reported units of this game is the Broncos run defense. They held 12 of 18 opponents below rushing yard averages and 14 of 18 below yards per carry averages. Again, the yardage is expected, as most teams give up on the run in order to keep up with the Broncos offense, but the yards per carry column is a significant surprise.

Overall, they rank t-seventh in yards per carry surrendered (3.7) and 14th in first-down conversion rate allowed (21.4%). They are also not particularly prone to giving up big plays on the ground, being one of four teams that didn't allow a rush of 40+ yards all season.

The one issue with the Broncos run defense is short-yardage situations. Denver has allowed 15 rushing touchdowns, which is ninth-most in the league.

Player to watch: Lynch. Though his dominance has been a bit overstated -- likely due to his media aversion and his affinity for fruity candies -- Lynch is always a threat to break out a game-changing play.

Advantage: Broncos +0.5. It surprises even me to give the Broncos the advantage in this matchup, but the charts speak for themselves. Lynch may go Beast Mode once or twice in this game, but the stats suggest it won't happen more often than that. 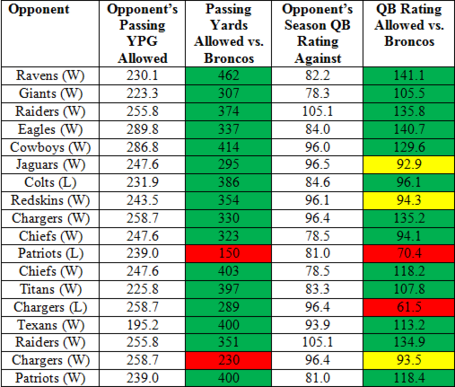 Alright, enough beating around the bush, let's get to it: Peyton Manning vs. Richard Sherman. The No. 1 pass offense vs. the No. 1 pass defense. This is what everyone is waiting to see. This is the main event.

The Broncos, to no one's surprise, have been dominant through the air all season. They surpassed yardage averages in all but two games this season and outdid passer rating averages in 13 of 18. 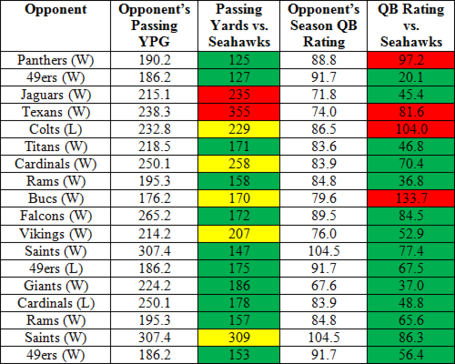 Of course, the Seahawks are just as impressive on defense. Just two opponents all year surpassed yardage averages against the Seahawks, while only four scored a higher passer rating average than normal against Seattle.

The Seahawks also dominate the raw statistics on NFL.com. They rank in the top 10 in nearly every category, including the top ranking in yards, yards per attempt, interceptions and passes of 20+ and 40+ yards allowed. They are the yin to Manning's yang.

Player to watch: Wes Welker. Because Manning doesn't like to hold on to the ball very long and the Seahawks have a talented pass rush, short-yardage passing plays will be key for both teams. Welker excels at running quick routes, and as long as he doesn't get a case of the Super Bowl Dropsies, he should be a big factor in this game.

Advantage: Even. Sorry to disappoint, but I can't in good faith give the advantage to one team over the other here. Manning will get his yards, but the yardage won't be enough to beat the Seahawks. He'll also need to be great in the red zone, where both the Broncos offense and the Seahawks defense excel. I am typically of the belief that a great defense usually triumphs a great offense, but Grantland did double duty on the topic this week and found that, in the past, there has been no clear advantage for either side. 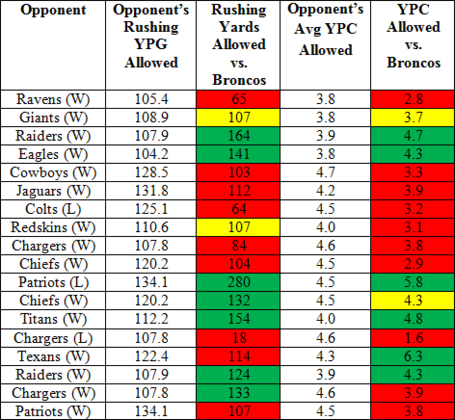 The Broncos run offense has obviously taken a back seat to their passing game all season. They've outgained defense's yardage averages in seven of 18 games, while surpassing yards per carry averages in just six.

Denver remains a pretty average running team when it comes to raw statistics. They rank t-17th in yards per carry (4.1) and 11th in rate of first-down conversions (23.2%). They aren't a big threat for breaking out any big plays on the ground, totaling just nine rushes of 20+ yards (t-18th) and one rush of 40+ yards (t-20th).

That being said, Knowshon Moreno is enjoying the best season of his career. His 1,038 rushing yards and 10 rushing touchdowns are career highs for him, and his 4.3 yards per carry average is more than respectable. 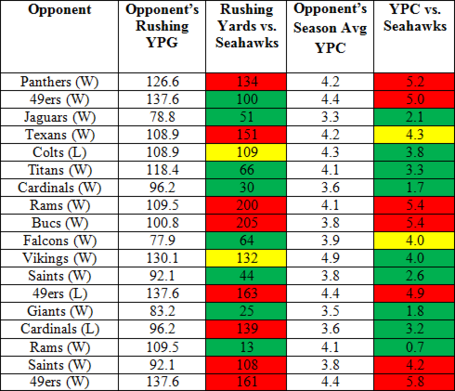 Seattle's dominant pass defense doesn't translate as well to their run defense. They held just eight of 18 opponents below rushing yard averages and nine of 18 below yards per carry averages.

Seattle's defensive stats are almost identical to Denver's. In fact, they both allowed the exact same number of rushing yards during the regular season, with Seattle facing just two more rushing attempts. Perhaps the biggest difference between the two rushing defenses is touchdowns. Seattle allowed just 4 rushing touchdowns all season (fewest in the NFL). Additionally, they gave up first downs on just 19.7% of the opponent's rushes (ninth-best). I think it's fair to say that the Seattle run defense is better than the chart above suggests.

Player to watch: Brandon Mebane. Who? Maybe this will jog your memory:

Mebane is a little-known, but highly regarded, defensive tackle. According to Pro Football Focus, Mebane had the second-highest rating against the run all year among all players. He also leads the impressive Seattle defense with 8 tackles for a loss.

Advantage: Seattle +0.5. Though the Broncos have an underrated running attack that nicely complements their dominant passing game, the Seahawks have an equally impressive defense. It's hard to imagine any scenario in which the Denver running game makes a big impact on the final outcome, especially considering Seattle's impressive defensive line.

Weather. The most covered issue since the beginning of the season has been the weather for the Super Bowl in New Jersey. However, the forecast is currently predicting a very mild day. Although it should be pretty cold by the second half, the wind looks to be minimal and the precipitation non-existent.

Special teams. This is where the scales could really tip in Seattle's favor. With Harvin likely to return kicks and Denver allowing the most yards per kickoff return during the regular season, the Seahawks could really get a big boost that could change the outcome of the game.

The Seahawks overall have a surprising +1.5 advantage despite being slight underdogs in the game. The main disconnect here seems to be everyone's fascination with the Broncos and their passing offense. But when you look at the entire team, Seattle has built a more balanced, more complete team. They don't have a particular weakness, and even their perceived weaknesses (like their passing offense) are actually somewhat of a strength. The only thing the Broncos have that the Seahawks don't is an experienced quarterback. And while that could very well make all the difference needed to win a Super Bowl ring, I don't think it compensates enough for the rest of the team. Seahawks 27, Broncos 20.