Welcome back Lions fans to another episode of Cub Scouting with tjwGOblue! This will be our first defensive series and we will be starting with Safety prospects. There has already been a lot of talk on POD about whether the Lions should consider drafting another CB but I believe the talent is already there and hopefully the new coaching staff can get more consistent play out of the young players. I am much more concerned with the talent and depth at the safety position.

Glover Quin has been a solid addition to the team and Don Carey has been good depth for the past couple of seasons. Louis Delmas might be a cap causality this offseason considering the team could save $6 million in cap space if they decide it is time to move on. That leaves John Wendling, DeJon Gomes and Akwasi Owusu-Ansah who have all proven to be good special teams players but leave a lot to be desired as starting safeties.

So let us begin! Just a reminder, the idea behind this series is to give people a wide range of prospects, not just the top end talent. Topics to be covered are a quick bio on the prospect, their college stats, accolades and an "expert" analysis. 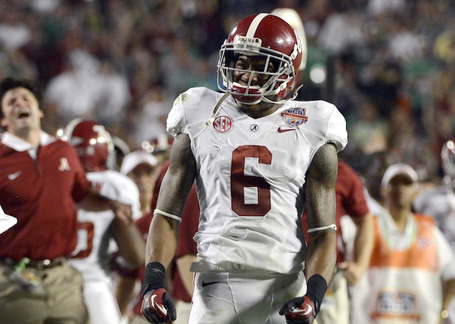 Quick Bio: From Orlando, Florida and was the #1 safety prospect coming out of high school. Often referred to as "Ha Ha" Clinton-Dix which was a nickname his grandmother gave him as a child that has stuck. He chose ‘Bama over Florida, Florida State, USC, Ohio State and Notre Dame.

"Expert" Analysis: Did you know that Nick Saban has produced 111 NFL draft picks as a college coach, including 33 in the past 6 years at Alabama? Clinton-Dix looks to continue that lineage for Saban and is currently considered the top safety prospect. His stock might have been hurt by taking a loan from an Alabama assistant coach which resulted in him being suspended for two games. A college player taking money? Shocking, I know. In all seriousness, though, I doubt this suspension prevents him from getting drafted in the first round. He has shown impressive coverage skills and overall is a very fluid athlete. He has little trouble turning and running with his assignment. Plus, he's sort of a "lanky" guy. I can't find any wing span measurements but he does a nice job of making a play for the ball. This might get him in trouble in the pros where refs will be stricter when he tangles with receivers. He needs work on his run game recognition as he has looked hesitant at times. Returning for his senior year probably would have helped but I think the suspension left a sour taste in his mouth and physically he is ready for the NFL. My personal complaint about him is his lack of "blow up" plays. The type of plays which ESPN used to feature on Jacked Up. This is reflected by the lack of force fumbles in his college career. Considering today's NFL, however, this might be a good thing. Clinton-Dix is not the most impressive prospect out there and might be a safe pick, but the Lions could do a lot worse at #10. 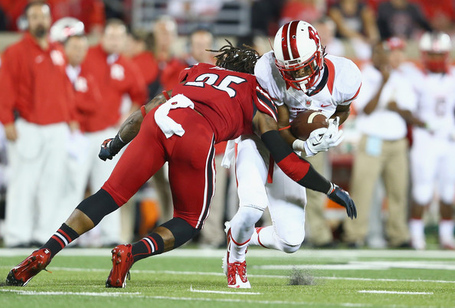 "Expert" Analysis: After Clinton-Dix, safety prospects are all over the place but Calvin Pryor has steadily been climbing up most draft boards. Played heavily his freshman season and eventually took over the starting job half way through. An incredibly physical player, some sites say he might be the hardest hitter in this draft. His physicality has scouts comparing him to Dashon Goldson which might not necessarily be a good thing in today's NFL. Pryor could play either safety spot showing good run coverage recognition, strong tackling form and having the ideal athleticism for pass coverage. Pass coverage, however, is a big question mark to his game. In Louisville's system, safeties either played deep zone or dropped into the box for run support. Also, while Louisville has been dominant the past few seasons, they played in an easier conference so Pryor does not have much tape up against elite opponents. As of right now, Pryor is on the cusp of the first and second day of the draft. There are a lot of positives to Pryor's game and a few question marks but he has steadily improved each season at Louisville and has the athleticism to succeed at the NFL level. 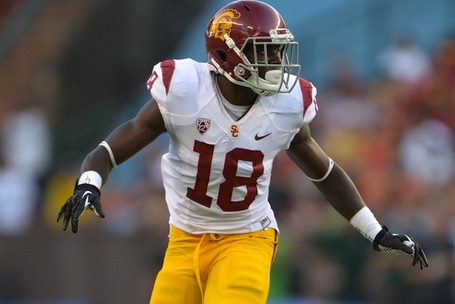 Quick Bio: From Lakewood, California. Was a 3 star safety prospect out of high school. He received multiple scholarship offers from various Pac 12 programs as well as Oklahoma and Notre Dame. He redshirted his freshman year at USC. Played linebacker for his first two years before switching back to safety this past season.

"Expert" Analysis: One of the prospects I am more excited about. Right now Bailey is considered a day 3 prospect but after the combine he could easily move into day 2 due to his athleticism. He has shown to be a very coachable prospect, evident by his ability to switch between linebacker and safety during his time at USC. His time at linebacker has made him very good at run play recognition. He's a good tackler, not necessarily a hard hitter, but there is some physicality to his game. USC would ask Bailey to play man coverage occasionally and he showed that he's not lost when asked to do so. He has struggled against shiftier route runners but he is able to keep up with receivers. A knock against his coverage skills would be his fluidity in terms of turning his hips and running with receivers but this could be a lack of experience at the position more than anything. Also, even as a linebacker Bailey has shown strong ball skills and good awareness to make a play for the football. What I like about Bailey is the fact that he played at both linebacker and safety. This could potentially allow the Lions to keep him out in different looks. Theoretically he would be able to play safety in their base defense and drop down into a linebacker role in nickel or dime packages. He needs work as a safety prospect but he has shown ability to be coached and would be well worth a pick for the Lions. 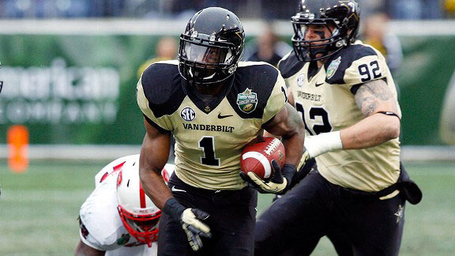 Quick Bio: From Stone Mountain, Georgia. Was a 3 star recruit and received offers from some big time programs like Georgia, Michigan, Miami, and South Carolina. Did not red shirt and eventually started 9 games his freshman year for the Commodores. Invited and played at the Senior Bowl.

"Expert" Analysis: Ladler is considered by most scouts to be a late round pick. He is able to play both safety positions. Has shown good run and pass coverage skills. His pass coverage is what has really improved this year in terms of turning his head and locating the ball which will be a valuable skill at the pro level. He looks comfortable at the line of scrimmage and isn't afraid to lay a big hit. Ladler has a great and quick first step but needs to learn how to use it better. It is what put him in position to get a career high and team leading 5 INTs this year but also led him to over-pursue plays which led to bigger gains. The question heading into the draft for Ladler is what is he? A free or strong safety? In today's NFL, that is not necessarily a huge concern since most defensive schemes use their starting safeties interchangeably. The bigger issue might be that Ladler (which is what possibly might lead to the previous question) does not excel at any particular skill set but appears to be above average in all of them. 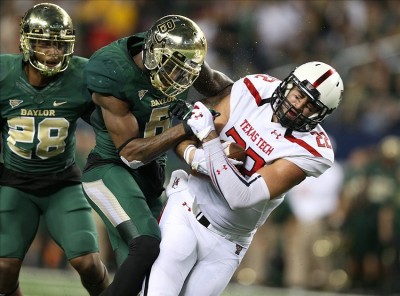 Quick Bio: From Waco, Texas. Was a four star recruit and chose his hometown Bears over Texas and Oklahoma. Was arrested at the beginning of this season for a misdemeanor assault charge but was released on bail. Dixon was later cleared by a grand jury of any charges. He was invited and played in the Senior Bowl where the Detroit Lions have been confirmed to have interviewed him.

"Expert" Analysis: I was originally going to cover a member of the "No Fly Zone" but considering Dixon was interviewed by the Lions down at the Senior Bowl, I felt somewhat obligated to review him. Sadly, I was left unimpressed. He is an incredibly physical player. Example, he literally knocked out Texas Tech tight end Jace Amaro in their match up. Dixon is a pretty old school player in that sense but he's going to get himself in trouble in the modern NFL. He was ejected from the TCU game for targeting Trevone Boykin in a very stupid play. At no point did Dixon locate the ball and led helmet first into Boykin. Dixon is pretty undisciplined player and generally relies on his athleticism to make up for his mistakes which will not work as well in the NFL. He is much more of a "launcher" than tackler, which again, will not work very well in the pros. Plus his coverage skills leave much to be desired. Anything positive? He is a big hitter and always seems to be around the ball. Also, I think with the right coaching and discipline he would improve on his faults. His technique is sloppy but that did not seem to hinder his playing time which is an indication of the coaching staff at Baylor more than anything. He reminds me a lot of Louis Delmas which, as we all know, has its pluses and minuses. If Dixon were to fall into the third day of the draft, I wouldn't be upset if the Lions took him. Anything sooner than that, I would be hesitant if I were Mayhew considering Dixon's undisciplined style of play and lack of coverage skills.

That's all folks! Who has caught your eye this mocking season? Like wide receiver, safety appears to be a relatively deep position group for this draft. Were any of these prospects on your wish list for the Lions this off season or was there somebody else? Be sure to share in the comments! Our next episode will likely go back to offense, so stay tuned. Go Lions!

Who should the Lions draft at the Safety position?