Film review: Why are the Lions struggling to run the ball?

After a decent 2013 season, the Detroit Lions running game has been one of the worst in the league this year. What has changed?

Share All sharing options for: Film review: Why are the Lions struggling to run the ball?

In 2013, the Detroit Lions had a perfectly fine running game. They averaged 112 yards per game (17th) and 4.0 yards per carry (22nd). It wasn't explosive, but it nicely complemented their occasionally elite passing game. This season, however, has been a completely different story. They are averaging just 87.2 yards per game (27th) and 3.1 yards per carry (t-30th). So why is the Lions' run offense suddenly so much worse? Sure, the Lions have faced solid defenses in the New York Jets and Carolina Panthers, but the Lions could only manage 3.0 yards per carry against a Green Bay Packers run defense that is statistically the worst in the league and is ceding 4.6 yards per carry on the season.

The most obvious scapegoat for the demise of the running game is in the backfield. Both Reggie Bush and Joique Bell have been extremely disappointing through the first quarter of the season. Bell is averaging 3.2 a carry thus far, which is well below his career average of 4.1 a carry, and Bush is averaging 0.7 yards less per carry than last year. Much of this decline has been their own faults.

Let's look at Joique first, whose decline seems much more surprising than Reggie's. Last year, Bell was constantly praised for his good vision and hard-nosed running style. This year, he's been completely different:

This is a very strange read from Bell. Every single lineman is blocking with inside leverage, creating a huge cutback lane for Joique. Even the fullback cuts back across the field to help seal the edge on that side of the line. But Joique never even glances for a cutback lane. Instead, he tries to speed to the outside and manages exactly 0 yards. Just look at the cutback lane he had: 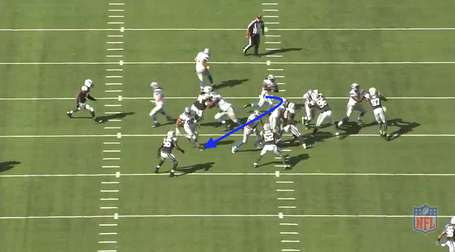 Joique easily picks up at least 10 yards, possibly a lot more, if he sees the cutback lane. What is so frustrating about this play is that it looks like it was exactly designed for this purpose. The Lions have two linemen at the second level taking care of both linebackers, and there's no unblocked defender in sight. I'm not sure if this was a miscommunication or just a bad read, but either way, it's on Joique.

Bush has had these sorts of issues his entire career. When in doubt, he tries to utilize his speed to the outside, which worked so well for him in college. He is very indecisive in the backfield and tends to try to deke when there's a perfectly good hole for him.

Reggie's best asset is his speed. So when he ends up taking two cuts in the backfield, he is taking away his greatest strength. There are two holes available for Bush on this play: 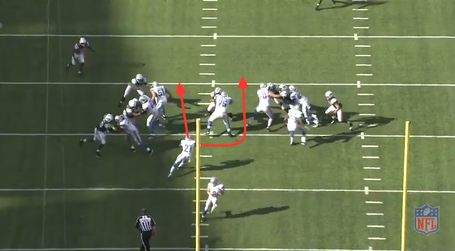 The hole on the left side was the designed lane for the play. With each defensive lineman taken care of, Bush would only have to make the safety coming down into the box miss. With a decisive run, Reggie's speed could have very well beaten the safety. The right side of the hole would be a potential option as well. However, as you can see from the still, Garrett Reynolds and Brandon Pettigrew have their hands full with the defensive end. That is not the strong side of the line, anyway, so it is the less appealing option.

Bush originally cannot decide, making two quick jump cuts in the backfield. He eventually chooses the correct lane, but his hesitation gave the defensive linemen an opportunity to shed their blocks and the safety time to close in on him. He picked up 6 yards on the play, but it could have been much, much more.

The play of the running backs hasn't been the only issue with the running game, but it is perhaps the most disappointing.

It's no secret that the Lions have been struggling at the right tackle position. After losing their first- and second-string players, the Lions have been relying on the tag team of Reynolds and Cornelius Lucas. The results have not been pretty. Detroit clearly knows they have this problem. By my count, of the 27 rushes they had against the Jets, only seven were designed to go to the right side of the line. This makes for a very predictable rushing game, and defenses can take advantage:

The left defensive end, knowing he doesn't have to worry much about the ball coming his way, darts inside toward the ball, and Reynolds barely even gets a hand on him. All it took was one bad step from Reynolds and the play was over. The end eventually wraps up Bell for no gain.

Of course, the Lions eventually used this vulnerability to their own advantage. As Justin Simon pointed out, the Lions noticed the Jets crashing inside on the offense's right side of the line, which allowed Matthew Stafford to pull off his game-clinching bootleg so effectively. But for the other carries in this game, the right side remained a liability.

The rest of the offensive line

Coming into the year, the Lions' offensive line was thought to be one of their biggest strengths on offense. However, that has not turned out to be the case. Looking at the tape, I found a lack of chemistry and communication on the offensive front that I hadn't seen at all in 2013. I wasn't the only one who noticed:

While Justin was talking about pass blocking, run blocking has faced similar issues this year. In the first two rushing plays against the Jets, the Lions' offensive line put the running backs in no position to succeed:

Watch as right guard Larry Warford has no chance to block his man from getting into the backfield. Typically, you'd see Dominic Raiola help Warford out by chipping the defensive tackle before heading to the second level, but Raiola curiously goes to help out Rob Sims, who already has leverage on his man (granted, this man is former rookie of the year Sheldon Richardson). Warford is left on his own and does his best to create a cutback lane for Bush, who can only manage 2 yards on the play.

On the next running play, it is Riley Reiff who is left on his own:

Reiff's responsibility is the defensive tackle, who already has inside leverage at the snap. He receives no help from Sims and is left in a footrace, which he ultimately loses. That's nearly impossible for Reiff to defend given how aggressively the tackle rushed on that play.

Now, I cannot know for sure if both of these plays were examples of poor communication by the offensive line or just bad play design. But either way, that falls on the coaches. Either the coaches are not putting their players in a position to succeed, or they are not clearly communicating what is expected of them. These are not examples of failed blocks or lack of talent. The players are decidedly not doing what it looks like they should be doing, and that is clearly a coaching issue.

Obviously, coaching flaws would be a logical reason why the Lions running game looks so much worse than it did last year. But in their defense, they have not been helped out with the play of the running backs or the injuries at right tackle. Still, there should be enough talent on this team to manage more than 3.1 yards per carry. The Lions will need to figure out a resolution if they plan on becoming the elite offense that is expected of them.