Things of that nature: Using Eric Ebron against the Bills defense

Some lessons from the San Diego Chargers on how to attack vulnerabilities in the Buffalo Bills' coverage.

Share All sharing options for: Things of that nature: Using Eric Ebron against the Bills defense

Here we are at the quarter pole of the season... That went quickly. Last week, the Detroit Lions left the Big Apple (i.e., East Rutherford, NJ) with a win, and my brother and I left with our lives and dignity intact. More so the former than the latter. Most importantly, New York provided us with the first, and probably only, "Things of that nature" Fan of the Week: 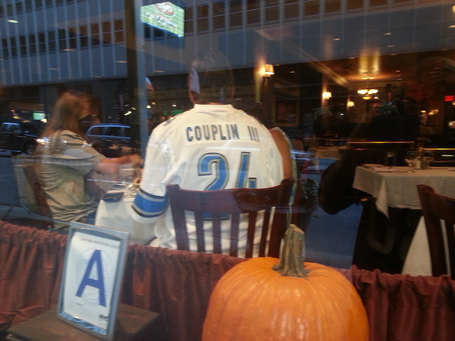 I am unquestionably a fan of audacious jersey purchases, but I refuse to believe there is someone out there who, apropos of nothing, decided to purchase a Jerome Couplin III jersey. No one is that incredible. So, we're left with the following explanations. This man is:

Do you know this man? If so, please identify him in the comments and earn a prize. (Spoiler alert: The prize is my gratitude.) Now, on to Week 5.

The Buffalo Bills are currently fielding a top-10 defense, according to Football Outsiders' DVOA. Much of that ranking is based on their strength against the run, as they're still vulnerable through the air. As POD overlord Sean Yuille pointed out earlier this week, the Bills sit near the bottom of the NFL in passing yards allowed. We are talking about a Jim Schwartz defense, after all. (The Lions are ranked second in defensive DVOA at the moment. To quote Sean, "Is this real life?")

The Bills' linebackers in particular seem to be exploited in coverage. Given that Joseph Fauria has been felled by a hellacious beast and Brandon Pettigrew's route tree consists solely of 6-yard curls, now seems like as good a time as any to think about how the Lions can go after the Bills using Eric Ebron. Fortunately, the San Diego Chargers provided a blueprint on how to attack the Bills using their own athletic tight end, Ladarius Green.

The Chargers hit Green for big gains a couple times in Week 3 using the same general route concepts. By stretching the coverage on the outside third of the field, Philip Rivers was able to float easy passes over Bills linebackers for 20+ yard gains. 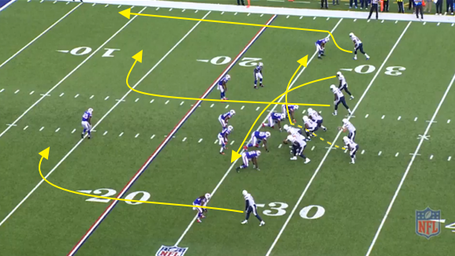 Green is the third man from the top of the image, split just outside the right tackle. The receiver split out wide at the top of the image is going to run a deep go route to the outside of the cornerback, drawing the defender with him. In addition to drawing that defender deep, the wide receiver's other responsibility is to keep the cornerback turned to the outside and thus blind to the routes developing behind him. The running back floats near the line of scrimmage for any blitz pickups before drifting into the flats. Green, meanwhile, runs a deep out about 12 yards downfield. 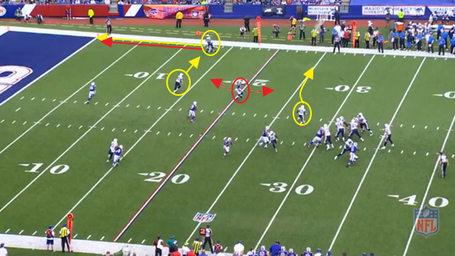 The goal here is simple: it's a numbers game. Any time an offense can have three receivers in an area of the field manned by two defenders, someone is going to be open. The RB leaking into the flats doesn't even have to draw serious attention from the outside linebacker. All he has to do is give him enough pause to allow Rivers to hit Green near the sideline, behind the developing deep route and the oblivious cornerback. The result is a 20-yard gain for San Diego.

The Chargers used a similar route concept later in the game to stretch the defense vertically. This time, the play featured deeper, longer-developing routes, that when executed, resulted in a larger gain for Green and the Chargers offense. 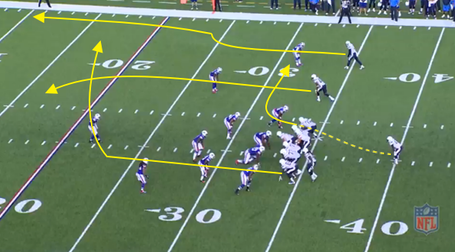 Green runs a deep crossing route here, staying in front of the outside linebacker initially before getting downfield behind the middle linebacker. (Again, having defenders' backs turned helps create space, for obvious reasons.) The target area for Green is the same, only 6 yards farther downfield. Like in the previous play, the outside wide receiver draws coverage deep on the corner route, while the RB comes into the flats. The specifics are different, but the goal is the same. 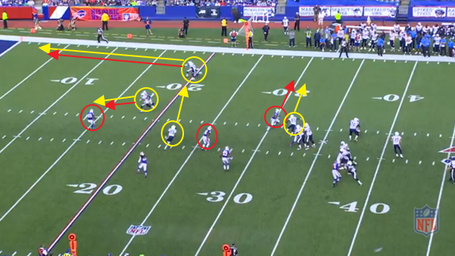 The outside linebacker jumps the running back route, with no other Chargers having entered his area of the field. I'm fairly certain the Bills are running man coverage with a single-high safety on the play, given how much the linebacker sells out toward the running back. (Necessary caveat: NFL defenses disguise coverage constantly, so deciphering it is a bit of a challenge.) Man or zone doesn't make much of a difference for Green, who has to keep running toward the sideline on his route, regardless. If it's man, he's just getting away from the safety behind him, who has already blown coverage. If it's zone, he's heading toward that open area. Meanwhile, the developing deep post by the inside WR draws the lone deep safety in coverage, leaving a gaping piece of terrain accessible for Green and Rivers, who throws a strike for 26 yards.

Green is a similar player to Ebron, in that both are athletic and somewhat raw. Sure enough, the Lions have already shown a willingness to use Ebron in these vertical stretch concepts against the Carolina Panthers. 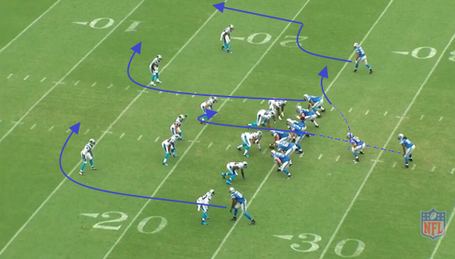 Golden Tate is the outside receiver charged with taking the cornerback deep on a corner route, but it could just as easily be Corey Fuller in this situation. Really, it just can't be Calvin Johnson, due to the extra coverage he draws. Again, all that is required for Tate here is the speed to go deep and the need to turn the corner outside and away from the rest of the play. Because the Panthers sit in a two-high shell (which teams often run with Megatron on the field), Ebron is able to find space once he gets behind the linebackers in coverage. 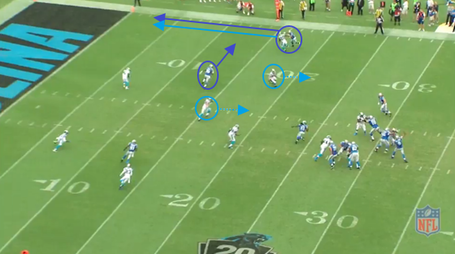 The Lions run this pass out of play-action, and Jed Collins is a bit late in getting to the flats. Because of that, and because Collins doesn't exactly strike fear into the heart of opposing defenses, A.J. Klein actually gets good depth in coverage -- enough to place a finger on the ball, but not enough to prevent it from going into Ebron's hands. The Lions built on this 17-yard gain and scored their lone touchdown of the game a couple plays later.

We still don't really know how Johnson's ankle is holding up. And considering the attrition going on with the Lions' running backs, more of the offensive load is going to fall on the shoulders of Ebron and Tate. They performed admirably last week. Let's see if they can keep it up.