Exploiting their weaknesses: The Buffalo Bills

A look at how the Detroit Lions can take down their second consecutive AFC East foe: The Buffalo Bills.

Share All sharing options for: Exploiting their weaknesses: The Buffalo Bills

The Detroit Lions will face their second straight AFC East team when the Buffalo Bills come to town on Sunday. The Bills are in the midst of a rough patch in the season. After starting the year a promising 2-0, including a big win on the road against the Chicago Bears, the Bills have dropped two games in a row and are now in the middle of a quarterback change. The Lions will have a good chance to take advantage of the Bills' disarray, if they can exploit their weaknesses.

Buffalo's offense is bound to look a little different this week with Kyle Orton starting his first game in a Bills uniform. EJ Manuel's time behind center was marred by inaccurate throws, poor decisions and holding on to the ball way too long. Orton is much more of a quick, decisive passer. But that doesn't mean that the Bills offense won't suffer from some of the same deficiencies it had with Manuel at quarterback.

Chief among the Bills' weaknesses is their pass protection. After allowing just one sack through the first two games, the Bills have allowed five in the past two weeks. As pointed out by fellow SB Nation site Buffalo Rumblings, the Bills have especially struggled when defenses throw in stunts to confuse the offensive line. 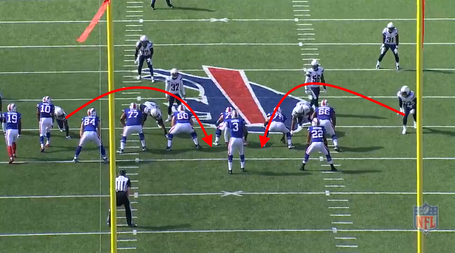 On this play, the San Diego Chargers bring both defensive ends inside to try and mix up the offensive line's assignments. How do the Bills react?

The defensive end on the right side of the play has a free lane to attack Manuel. While the right guard eventually gets a piece of him to avoid the immediate sack, the pressure is enough to get Manuel to enter panic mode. Eventually the rest of the line catches up with him and gets the sack.

Unlike the past, the Lions have not been modest about moving parts around on the defensive line to create disruption this season. In the GIF below, Ndamukong Suh is lined up as the defensive end to the camera's right. Watch what happens when he and Nick Fairley switch places:

Suh destroys the unsuspecting guard, sending him onto his backside. Suh then goes hunting for Aaron Rodgers and eventually takes him down, ending the Green Bay Packers' drive.

The Lions have one of the highest sack rates in the NFL, and even if Orton gets the ball out quicker than Manuel has, Detroit will likely cause a lot of disruption in the passing game.

Like the New York Jets last week, the Lions will have to face a formidable defense with a stellar line. Even if the Bills are without veteran defensive tackle Kyle Williams, they should be able to stuff the running game and create pressure. So where is their weak link? If last week was any indication, it is their linebackers.

According to Jeff Risdon of Bleacher Report, the Houston Texans thrashed the Buffalo defense over the middle of the field, attempting a total of 17 passes and completing 14 of them for 121 yards.

The Lions offense has been known to dink and dunk their way down the field, and they certainly have the talent to do so. Using Reggie Bush, Eric Ebron and even Golden Tate over the middle of the field has yielded positive results so far this season.

Above you see Tate (in the slot) take advantage of a huge mismatch on a linebacker. He easily beats the defender in coverage and picks up a ton of yards after the catch thanks to his elusiveness. With the Lions' dynamic roster, they can create a mismatch like this quite often. Watch below as Ryan Broyles is able to exploit poor zone coverage from the Jets' linebackers:

By the time the linebackers realize what is happening, they are too behind the play and Broyles is too quick for them to catch up. If Stafford is given enough time, he will often have looks like this against a mediocre-at-best Bills linebacker squad.

In a lot of ways, the game plan for the Bills is much like the one for the Jets. Create pressure on defense by being disruptive on the defensive line. On offense, the Lions should use their plethora of weapons to get the ball out quickly and effectively. Take yardage in chunks and tack on a bunch of YAC.

If the Lions can effectively utilize these game plans, they should have no problem in taking down the Bills.