Let's make some educated guesses about what Joe Lombardi will bring to the Detroit Lions offense.

Share All sharing options for: Projecting the 2014 Lions offense: Part 1

How's it going, Pride Of Detroit?

I trust everyone's fully transitioned into offseason mode -- attending Sunday brunches, spending more time with your loved ones, slowly dying inside. We may be stuck in the soul-shattering bleakness of winter, but that doesn't mean we can't turn our thoughts to the new life of spring. From death, there is rebirth, and that's true for most of the Detroit Lions' coaching staff in 2014.

After the team brought on Jim Caldwell and subsequently hired Joe Lombardi as offensive coordinator, one of the questions that remained to be dealt with was play-calling duties. Finally, after some internal discussions and even more public speculation, Lombardi announced that he will be calling the plays next season. In doing so, he'll bring plenty of elements from the New Orleans playbook with him.

Now that we finally have a logical starting point, what I'd like to do over a few posts is analyze tendencies in the New Orleans Saints offense and try to figure out which of those tendencies might show up in Detroit. When the Lions line up, what can we expect to see?

Of course, going through an entire offensive playbook takes a fair bit of time, even when doing so in my incredibly limited capacity. So much like a playthrough of Contra, we'll face the most basic elements first. Let's talk about the New Orleans rushing attack.

Darren Sproles, Pierre Thomas and Mark Ingram all play roles that are about in line with what you'd expect given their distinct skill sets. But the funny thing is, what's really distinct about their roles isn't the type of plays they run, but how many different plays they run. The portion of the New Orleans playbook for each RB seems to be inversely proportionate to size. You could write a doctoral thesis on all the ways the Saints use Sproles (if such an academic field were recognized), and the breadth of his involvement reaches comical proportions in comparison to Ingram's. In fact, from what I've watched of the New Orleans offense, there aren't actually any plays for Ingram that Sproles doesn't also run, albeit out of different looks and with much lower frequency (as Jeremy Reisman noted earlier).

As much as the Saints line up in shotgun and spread the field, they also run a number of concepts out of the I formation, including their most common run play: the zone lead. 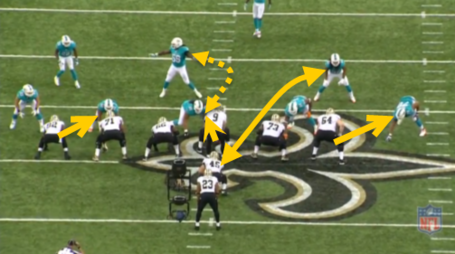 We spent a little time talking about zone blocking last season, so I won't go back into too much detail. The responsibilities of the linemen are simple: if there's a man over you, block him. When that results in a double-team, one of the offensive linemen heads to the second level once the initial block is established. Offensive linemen with defenders shaded to the backside of the play will still reach-block to the backside as they step to the side of the play, effectively stalling the defender for the second it takes for a blocker to arrive. Thomas' aiming point is the inside hip of the right guard here.

The zone lead, as its name implies, simply adds a FB lead element to the zone blocking play. The concept is diagrammed above. Pierre Thomas is shown in the frame, but Sproles and Ingram also run the zone lead. The Saints like to show slightly different looks for the play based on who gets the ball. They'll spread out the defense a little more for Sproles by splitting three players out wide, or bring in double tight ends for Ingram, who's not a serious threat to break anything outside. Running the same play from a variety of formations and personnel groups is a staple of the New Orleans offense (not that they're alone in this).

With all that said, I'm not sure how much zone lead we'll see out of the Lions, for two glaring reasons. Most importantly, Jim Caldwell stated in his introductory press conference that the Lions will primarily be a one-back offense. Second, the Lions don't have a fullback currently on their roster (again, Reisman scooped me on that one). Obviously the roster could be substantially different come training camp (and is already shaping up that way), but it doesn't feel right to me.

However, even though the Lions may not run a lot of zone lead, I'd bet a substantial portion of my insubstantial salary that they'll run plenty of zone, because Joe Lombardi and the Saints love them some zone runs.

They'll run the outside zone out of the shotgun with Thomas: 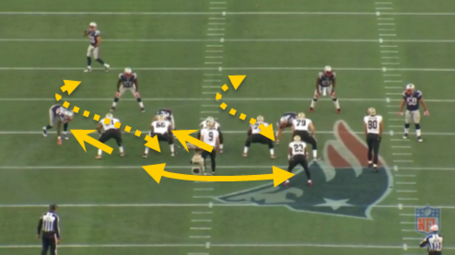 Or they'll run the same thing with Sproles: 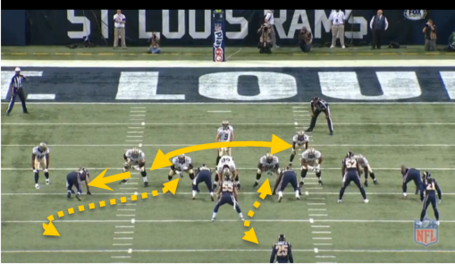 Or, when the mood strikes, they'll line the quarterback under center in a single-back set and run some more zone: 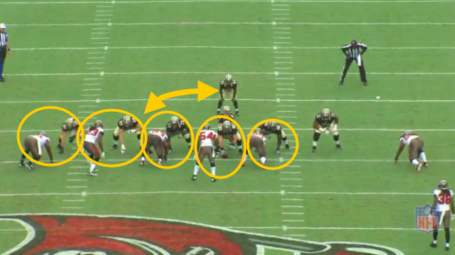 The Saints also throw in a few different blocking wrinkles on these plays. Occasionally, they'll use the playside TE to block the backside DE when the situation warrants it: 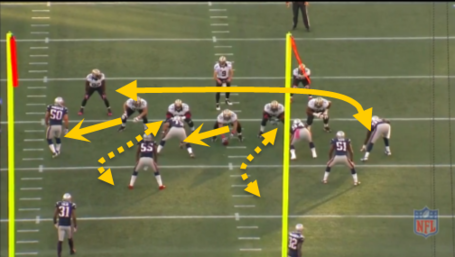 Anyway, you get the idea. All these zone looks are staples of the New Orleans run game, and you can expect Reggie Bush and Joique Bell to run all sorts of variations of these concepts next season.

Getting beyond the zone runs, though, what are the other elements of the Saints ground attack, and what elements fit each of the Lions' running backs?

The differences between Bush and Bell are a little more subtle than those between Sproles and Ingram. To me, they're essentially the north and south poles of Thomas. Bush is quicker and more elusive, while Bell is a harder runner (with underrated hands). But for all intents and purposes, Bush projects to play a Sproles-type role in the offense, while Bell will be more suited to Thomas' role.

One of the other common plays in the New Orleans ground game was an inside FB lead out of the I. Just as with the zone lead, the Saints ran this play with all of their RBs. But, for the same reasons previously listed, I don't see the inside FB lead being a staple of the Lions offense.

Outside the variations of zone, the Saints showed only a few different run plays. Again, the true variations in the offense came from the formations and personnel groups, not necessarily the plays themselves.

However, another play we can reasonably expect to see is the trap. Here, the Saints run it out of the shotgun with Sproles: 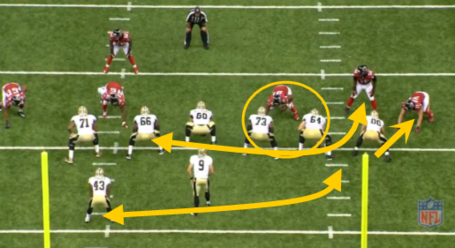 Like the zone plays, the trap appears in multiple formations. The above shot seems likely for a carry by Bush, whereas Bell would likely take this from behind the quarterback -- whether under center or also in the gun -- to get him running downhill immediately.

Every now and then the Saints will show a draw out of that same shotgun look as well, primarily with Sproles in the backfield: 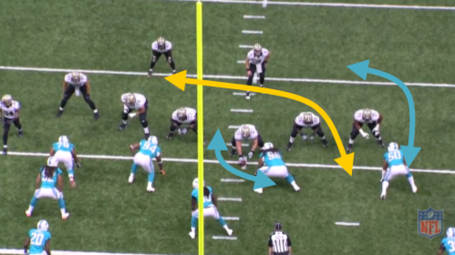 At this point, the running concepts grow pretty sparse, particularly for Thomas (and thus for Bell). This isn't to say those players stop being used -- Thomas is heavily involved in the New Orleans passing offense, as we'll see in later posts. However, there are a couple more options for Sproles in the playbook, and both aim to spring him outside. The first is just your basic buck sweep. 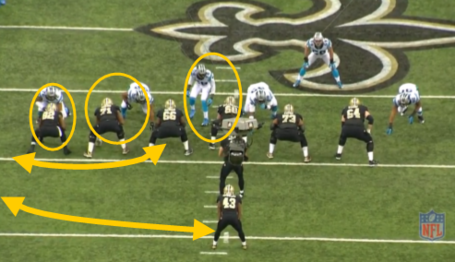 The goal here is clear: get Darren Sproles out in space, get the defense moving laterally and trust your running back to make a cut and go. While I'm sure Reggie Bush can be plenty effective with this play, I'm honestly more excited to see Larry Warford pulling and going downfield than anything. In addition, the Saints will also run this as a toss sweep with Brees under center, out of a balanced formation: 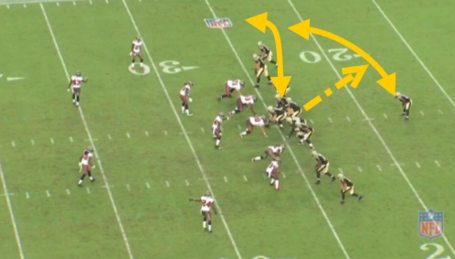 That pretty much sums up what the Saints show in the rushing game, for the most part. Expect plenty of inside/outside zone looks for Bell and Bush, some traps and some sweeps, all out of different looks. At the moment, I'm not sure the Lions actually have the personnel on hand to create those looks, but that is another discussion entirely.

Stay tuned for next week, when I'll be checking in with the Saints' play-action and screen game.