Welcome to Part 2 of our 2014 offensive preview, in which I try to make educated guesses about what elements of the New Orleans play-action game will show up in Detroit.

Share All sharing options for: Projecting the 2014 Lions offense: Part 2

Where we last left off, we discussed the plethora of rushing options for Joique Bell and (especially) Reggie Bush in the Detroit Lions' New Orleans-inspired offense, while also pondering the viability of the zone lead, given Jim Caldwell's statements in his introductory press conference. Having loosely established those tenets of the offense, we'll now turn our attention to that natural outgrowth of the run game: the play-action pass.

When discussing play-action, we're only examining plays in which the offensive line shows a run-blocking look. Obviously the quarterback's play fake is an important piece of the puzzle, and great QBs are similarly great at this. (I always believed Joey Harrington's most glaring flaw was his total inability to sell a run fake. Obviously his problems ran a little deeper than that.) But a defense's read -- at least for the front seven -- begins with the offensive line.

Since the most prominent run plays in an offense are the most likely to yield play-action success, I'm pleased to report that we face the same logical conundrum from Part 1. A significant amount of the New Orleans Saints' play-action success comes out of the zone lead looks, bringing us right back to THAT DAMN JED COLLINS. 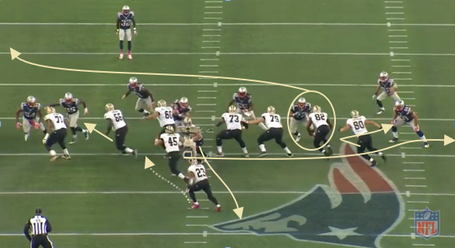 Here's your standard zone lead look, the staple of the New Orleans run game. The Saints tend to run the play fake toward the weak side of a loaded formation, away from the tight ends, Benjamin Watson (82) and Jimmy Graham (80). A couple steps into the play, Collins will cut back to the right side. Frequently, his reason for doing this is to engage with the backside defensive end. But on this play, Graham handles that duty, and Collins instead drifts out to the flats. 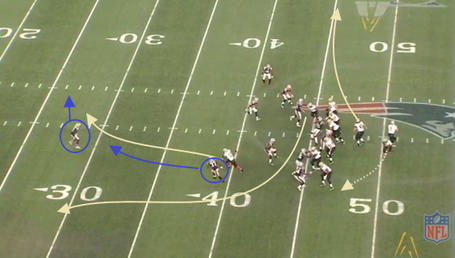 Robert Meachem runs a deep post route from the left side of the formation, drawing the attention of both the cornerback and deep safety, essentially clearing the bottom third of the screen for Watson, who disengages from his block after a couple seconds to leak across the formation and get down the sideline. Drew Brees puts it on him for an easy 30 yards.

If the Lions run plenty of zone -- and I obviously think they will -- they'll show a similar play-action look. Of course, given the assumed one-back formations of the Lions, we have to account for the absence of a fullback in this scenario, which is why we're looking at this play in particular. Assuming that the Lions will want to both show this look and avoid sending Matthew Stafford to an early grave, someone has to account for the DE. Of course, Collins isn't a blocking presence here. You can remove him from that first image, replace him with another wide receiver split right and achieve the same look with two of the Lions' tight ends. The formation differs, but the principles stay the same. Brandon Pettigrew (if he remains in Detroit) or Michael Williams would likely replace Watson in this hypothetical.

The Saints will also show play-action out of their other run looks, though not as frequently. It's not hard to see these exact concepts coming to Detroit. They throw out of the trap we discussed last week (which I failed to mention starts with a counter step from the RB): 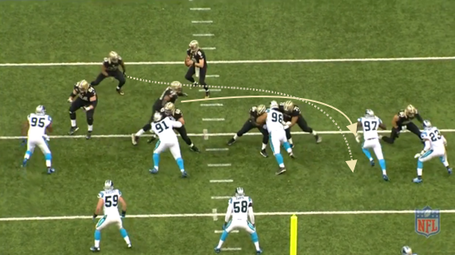 While the linebackers read run, the receivers (from top to bottom) run a post, corner and shallow out. The first two routes essentially force the deep safety to choose a side to cover. 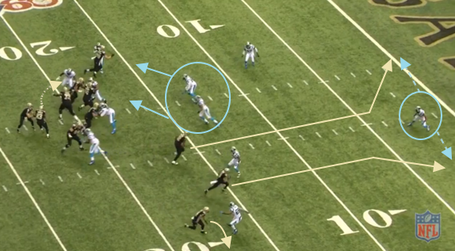 We could also potentially see some play-action off the toss sweep: 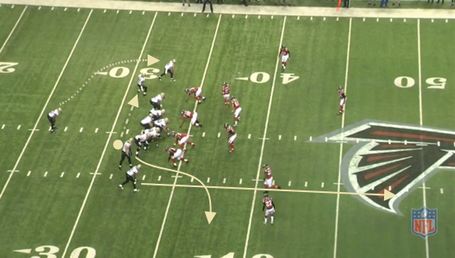 This is that balanced formation we saw last week, though some pre-snap motion makes it that way. 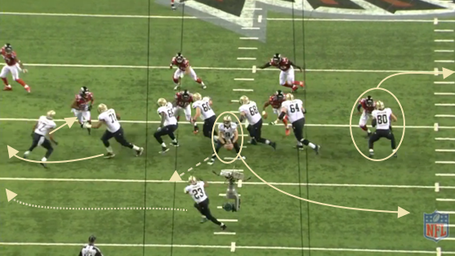 First off, I should note that despite my statements to the contrary last week, Darren Sproles isn't the only Saints RB to run this play -- Pierre Thomas is the man in the backfield for the "sweep." (I sit on a throne of lies.) After faking the toss, Brees rolls out to his right to throw to Graham about 7 yards downfield. The play is effective enough, but it's certainly a lot of effort for a 7-yard out. Good play-action is deep play-action. This is just another of the variations the Saints run.

That essentially sums up the key concepts of the New Orleans play-action game. Again, the zone lead makes up a heavy dose of what they run.

I'll only take a cursory look at the Saints' screen game, for a couple reasons. First, there are SB Nation screenshot limits to abide by. Second, the Saints run similar screens to what we saw from Scott Linehan last season. The Saints tend to run their screens out of shotgun looks with multiple WRs, and they keep Thomas outside for his catches and run the middle screen to Sproles for his. Those project to be pretty similar for Bell and Bush, respectively.

There is one screen play that I have to show, if only because it's fun to watch. 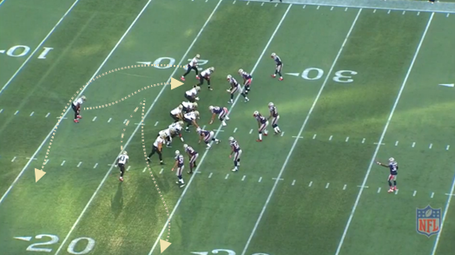 Out of that balanced look, Sproles motions from being split wide to an H-back position to the left. At the snap, the Saints fake a zone run left while simultaneously showing the end-around from the uppermost wide receiver. Sproles, meanwhile, will counter back right, resulting in Brees faking three consecutive handoffs. 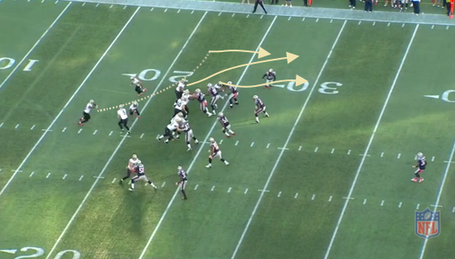 The entire bottom half of the defense freezes to (rightfully) account for Sproles and the WR on the end-around. Meanwhile, the line (still blocking zone) gets downfield in front of Thomas, who ends up taking the screen for 25 yards.

The play itself isn't unique to the Saints. I loved when the Lions ran that end-around motion with Nate Burleson. But there are just so many ways the play can go -- if defenses start reading the screen, you still have Sproles (i.e. Bush) leaking out shallow in plenty of space. Hell, maybe you have Calvin Johnson or Joseph Fauria getting off the block to run a deep post on the backside. The possibilities are endless. Of course, that applies to all these plays -- the constant caveat is that the route combinations can vary in any number of ways.

Stay tuned for next week's post, in which I begin to break down the tendencies in the New Orleans passing concepts.