We move our focus on free agency to the Detroit Lions' second biggest need: safety. Chris Clemons isn't a flashy option, but he provides solid consistency.

With Louis Delmas officially out of the picture after signing with the Miami Dolphins on Monday, the Detroit Lions are undeniably in need of a starting-caliber safety. The top name among free-agent safeties is Jairus Byrd, but his price tag will almost certainly be too high for the cap-strapped Lions. Instead, let's look at a more economical option, and one the Lions have been tied to: Chris Clemons.

Clemons is a 28-year-old veteran with five years of experience under his belt.

Clemons has had an up-and-down career. As a rookie, he spent his time as a backup safety. And after getting promoted to a starting position in 2010, he was relegated to mostly special teams duties in 2011. However, in his past two seasons with the Dolphins, he retained a starting role at safety.

His statistics are a bit underwhelming, with only 4 career interceptions and an average of just under 6 passes defended per (starting) year. But upon watching the tape, that isn't the type of safety he is. He isn't the ball-hawking type who will get a hand on any pass thrown to his half of the field. And he won't be the guy who will missile (*tear*) his way into the backfield for a tackle for loss. But he is the kind of safety who will find himself in the right spot more often than not and have quarterbacks looking elsewhere.

One thing I noticed right away after watching about half of his games last year was Clemons' ability to close on routes very quickly. At 28, he doesn't appear to have lost a step. 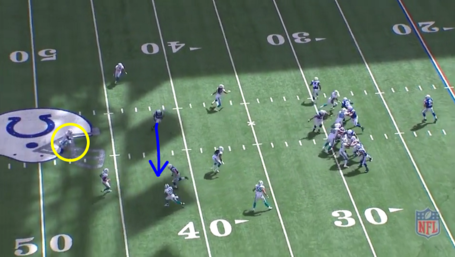 As Reggie Wayne crosses over the middle, Clemons has a lot of ground to make up. Additionally, there is a bunch of traffic he needs to navigate through in order to get to Wayne. 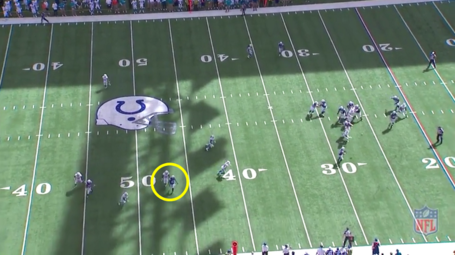 But Clemons closes quick, doesn't allow any of the other receivers to "pick" him and forces Andrew Luck to look elsewhere.

Below, Clemons appears to be beat. He has yet to commit to the tight end, having his hips still squared up. You may think that would leave him vulnerable to being blown by. 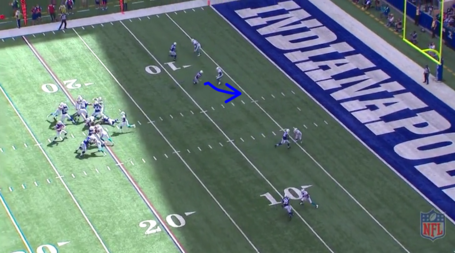 But Clemons quickly turns his hips when he identifies the route and has the tight end completely blanketed. 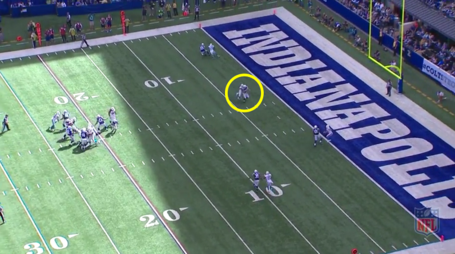 My biggest concern with Clemons is his lack of play-making abilities. He often finds himself in great position, but fails to disrupt the play. 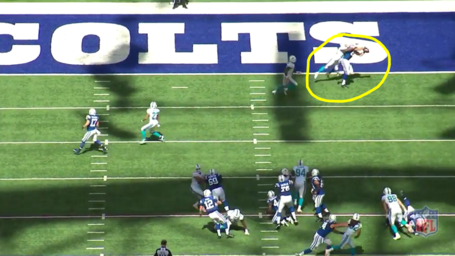 Clemons is draped all over the receiver here and in perfect position. But he sells out on batting the ball down instead of trying to disrupt the arms of the tight end. He fails to stop the play and cedes a touchdown (though it ends up being called back because of a penalty away from the play).

Overall, Clemons isn't a very flashy safety. He won't be the guy who lays huge hits. He rarely blitzes. And he won't be the guy who comes in and snags 7 interceptions and takes three of them for touchdowns. But he is a solid cover safety. In 2012, Pro Football Focus named him a "Secret Superstar," saying the following of Clemons:

For the year he had the eighth-best yards per coverage snap among safeties at .35 and had only two legitimate coverage blunders all season.

The Dolphins rewarded him with a one-year, $2,750,000 contract last year. He followed up his 2012 season with very similar numbers in 2013, and, according to NFLPenalties.com, Clemons did not commit one penalty all season. In 2014, I would expect Clemons to receive a very similar contract.

Clemons would immediately step in as one of the Lions' starting safeties. And although he won't be a flashy playmaker like Byrd (22 career INTs) may be, he would be a very affordable, very dependable option for Detroit.