James Ihedigbo's pass coverage ranking from Pro Football Focus is worrying, but is it really as bad as it seems?

Share All sharing options for: Is James Ihedigbo a pass coverage liability?

Let's be honest with each other: none of us know that much about James Ihedigbo. We know he led the Baltimore Ravens in solo tackles last year and was second in total tackles. We grasp his Pro Football Focus rankings and suck all of the marrow out, drawing overarching conclusions based on arbitrary numbers that we don't completely understand. He's a great run-stopper and a terrible coverage guy. That's what we "know" without seeing a second of film. Well, I'm here to put an end to that. Detroit Lions fans, meet James Ihedigbo, the man separated from the numbers.

I was hoping to find an upside to Ihedigbo's supposedly terrible pass defense. It didn't take me long to find an example of what Ihedigbo can do at his best. In fact, on his very first defensive snap of 2013, he laid the boom on Julius Thomas, breaking up what would've been a 20-yard gain. 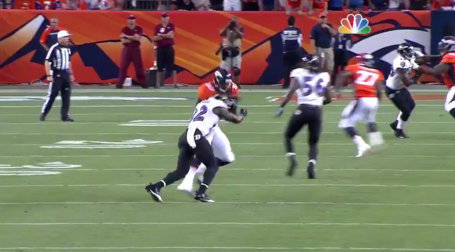 Notice how Ihedigbo got low enough to avoid contact to the head and put his helmet right on the ball, jarring it loose. This is excellent form and will make tight ends think twice about crossing over the middle of the field.

As I dug a little deeper, I found that the Ravens used Ihedigbo in a wide variety of ways. Often he'd be lined up as a typical safety. But when the Ravens brought in five -- or sometimes six -- defensive backs, Ihedigbo would often line up more as a linebacker than a safety: 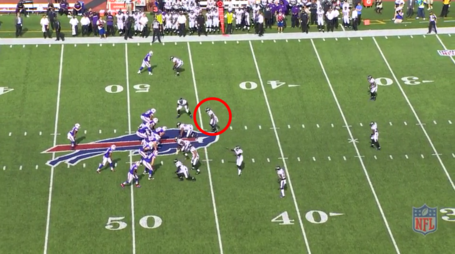 This is where Ihedigbo did his best work. His run defense is well-documented, but his impact went well beyond that. He also excelled as a blitzer from this position. Though he failed to record a sack last year, I saw several examples where his pressure caused inaccurate throws or forced a holding penalty. Additionally, Ihedigbo was very good in coverage when lined up man-to-man against a tight end. James is very physical in nature and is not intimidated by the mismatch against a larger, stronger tight end. 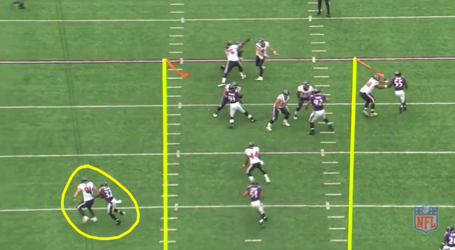 Ihedigbo loves to use his hands and body when in man coverage. Here he has his hands on Owen Daniels, but he's not disrupting a route or grabbing on to him. He's simply using his hands to locate the receiver while keeping his eyes on the quarterback. Eventually on this play, he broke up the pass and forced a field goal attempt.

However, as I continued to watch Ihedigbo, I started to see why his coverage grade was so poor last year. He often got caught focusing on underneath routes, leaving the back of the field wide open. 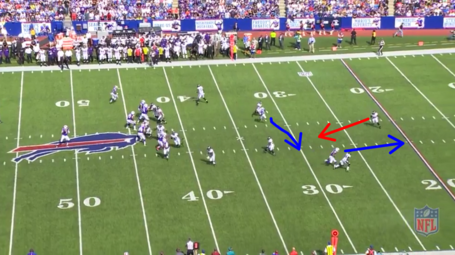 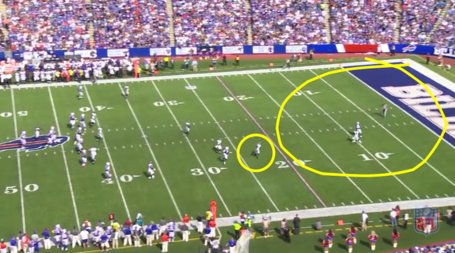 The route underneath is double-covered, while the quarterback has a whole lot of field to throw the deep route.

Unfortunately, this wasn't an isolated incident. This happened, at least, on one other occasion, and I only watched about a third of his games last year.

Overall, it's hard to argue with what we already know about Ihedigbo. However, I do think the Lions could use Ihedigbo situationally and have him excel. If they treat him more as a nickel corner or an additional defensive back in passing situations, Ihedigbo could be of great value as a blitzer and man-coverage body (not to mention he has great special teams value).

Of course, that would mean the Lions would have to add a more traditional safety before the season starts. And that's why I think the Lions still have a very big need at safety, perhaps their biggest. If the board doesn't fall their way, Ihedigbo will be the starter. He could be serviceable in that role, but he may also turn out to be a liability against teams like the Green Bay Packers, which will exploit the weak link in the secondary with relative ease.