Our look at the Detroit Lions' potential 2014 free-agent targets begins with the speedy Pittsburgh Steelers receiver.

With free agency just a week away, it is time to start looking at potential targets for the Detroit Lions. The Lions will undoubtedly be looking to fill their biggest need for 2014: wide receiver. One such option is Emmanuel Sanders, who will be hitting free agency because his rookie contract with the Pittsburgh Steelers is up.

Sanders enjoyed his best career season in 2013, totaling 67 receptions for 740 yards and 6 touchdowns (all career highs). Here's the breakdown of his career stats (via ESPN):

While none of those numbers are outstanding, the Lions haven't had a receiver not named Calvin Johnson have that many receiving yards since 2011. In fact, Sanders could very well fit the role that Nate Burleson played that year (73 receptions, 757 yards).

Like the Lions used Nate, the Steelers liked to use Sanders in multiple roles: as a deep threat, as a wide receiver screen option and on quick slants. But Sanders has the youth and athleticism that Burleson seems to have lost through the years.

Looking at the film, it becomes obvious that Sanders has elite athleticism: 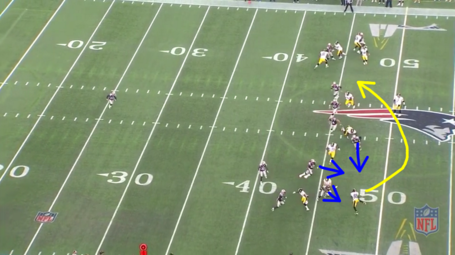 We jump in the middle of a wide receiver screen to Sanders. Unfortunately for him, the blocking has broken down and he has three New England Patriots bearing down on him. But Sanders' agility allows him to hop around the defenders and reverse field. It's this kind of play-making ability that the Lions have been sorely missing outside of Johnson and Reggie Bush.

Up against a decent cornerback (Antonio Cromartie), Sanders just embarrasses him. 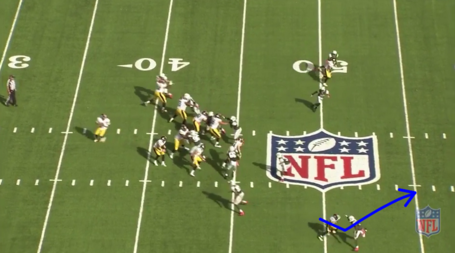 Sanders makes an initial cut to the outside, and with a little help from a pump-fake, Cromartie completely sells out on the fake. It was a great, sharp route run by Sanders. But what really impressed me from Sanders was his speed after the cut. It was such a smooth route that Sanders came out of the cut seemingly running faster than when running in a straight line. Look at how quickly he left Cromartie in the dust: 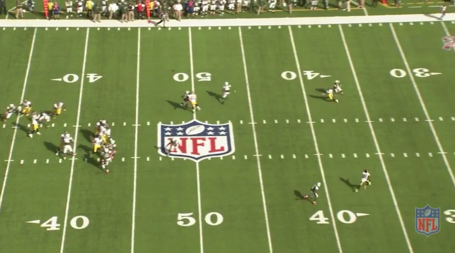 15 yards after making his cut, he already has nearly five yards of cushion between him and the corner. When they say "you can't teach speed," this is what they are talking about.

My biggest concern with Sanders is his decision-making. At just 26 years old, he still shows signs of rawness and immaturity. He never developed great chemistry with Ben Roethlisberger, and that was obvious watching the tape from last year. In the handful of games I watched with an eye on Sanders, there were several occasions in which Big Ben was visibly frustrated with him. And in the following situation, Sanders' poor decision cost the Steelers big.

Desperately trying to stage a comeback, Roethlisberger and the Steelers needed a big play, and they looked to Sanders: 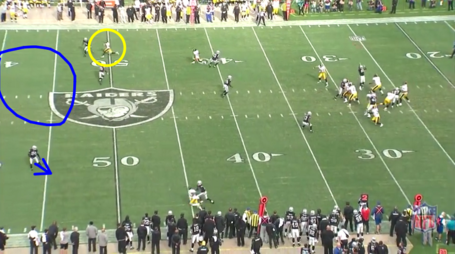 With the Raiders in cover two defense, it is just Sanders against the safety. At this point, Sanders has inside leverage to all sorts of room down the center of the field. He doesn't have to worry about the opposite-side safety, as he has his back turned to him. As you can see, Roethlisberger has just released the ball. 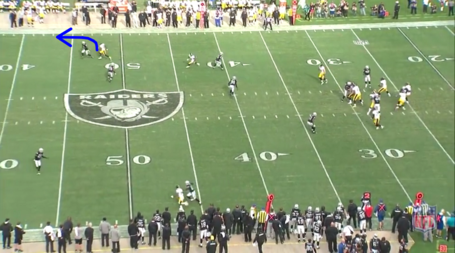 But for whatever reason, Sanders chooses to go around the safety to the outside. He is not forced that way; he makes a conscious decision to do so, taking away any sort of leverage he had. Of course, Roethlisberger had already thrown the ball, seeing all of that inside leverage, and placed it perfectly... for the safety. It looked like a poor decision by Big Ben, but Sanders was truly at fault.

However, Sanders' lack of chemistry with Big Ben could work to the Lions' advantage. He didn't put up gaudy numbers in Pittsburgh, so that may mean he could come cheap in free agency. Though he made $2.5 million last year, his production in 2013 matched the likes of Doug Baldwin and Cecil Shorts, who both made well under $1 million last year (though they were both still on their rookie contracts). Perhaps a slightly fairer comparison is Jerome Simpson, who in 2011 produced very similar numbers (725 yards, 4 TDs) at age 25, then proceeded to receive a one-year contract in free agency totaling $2 million (with a base salary of just $800,000). Getting Sanders at a contract between $2-3 million per year is reasonable.

Overall, Sanders is a very affordable option for the Lions. His supreme athletic talents are at their peak right now, but the questions about his consistency and decision-making are real concerns. If the Lions' coaches believe they can mold him into a solid No. 2 receiver, he could be a huge under-the-radar free-agency pickup.