Our look at potential free-agent targets for the Detroit Lions continues with another interesting wide receiver option: Hakeem Nicks.

Previously, I looked at Emmanuel Sanders as a free-agent option for the Detroit Lions. Sanders is a speedy, versatile receiver. Today, I am looking at Hakeem Nicks, who doesn't resemble Sanders in any sort of way. Though Nicks is also just 26 years old, that's where the comparisons end. While Sanders is a versatile receiver capable of playing both the slot and the outside, Nicks is strictly an outside threat.

But Nicks is also a much stronger, better-handed receiver than Sanders. Think of him as a Calvin Johnson type of receiver with 80% of the physical traits (which is still pretty impressive). Nicks excels at catching contested balls, making impressively athletic catches and, at times, displaying deceptively quick speed.

In his young career, Nicks has already had a lot of ups and downs. His inconsistency is a bit worrying, but even during a rough year for the New York Giants, Nicks improved on his numbers from 2012 with a decent showing last season. A lot has been made of Nicks' large decrease in touchdowns, but in the age of the ever-growing nuisance that is fantasy football, issues like that tend to be overblown (see: Calvin Johnson's 2012 season).

But drawing conclusions from statistics is tough to do by any means, so let's look at some tape. Just after a short amount of film, it's not hard to see why Nicks is one of the most sought-after receivers on the free-agent market. There's an endless amount of highlights of Nicks making impressive, highly-contested grabs. In fact, if you have 24 minutes to spare, here's a highlight reel of seemingly every catch he's ever made:

(And if you don't have that amount of free time, play the video anyway, and you'll be treated to 24 straight minutes of the song "Sandstorm." That's a pretty good consolation prize, if you ask me.)

If video isn't your thing or if your boss blocked YouTube from your computer, here are a couple screenshots showing what Nicks is capable of: 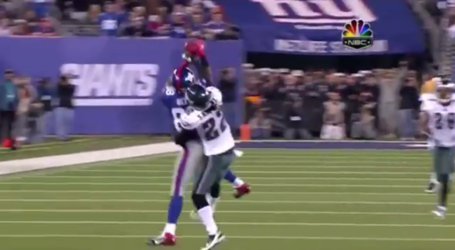 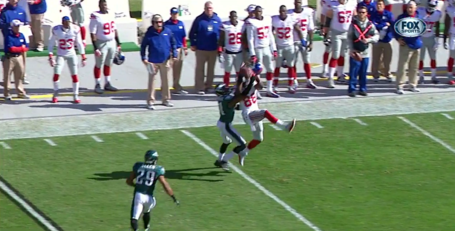 Even with bodies draped all over him, Nicks is capable of coming down with the ball. His hands rival those of the best in the NFL. And don't underestimate his speed, either. Watch as he blows away San Diego Charger Richard Marshall, who once ran a 4.42 40-yard dash. 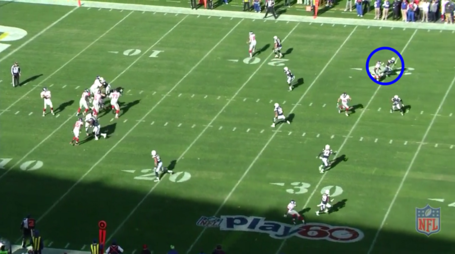 Here he is lined up stride-by-stride with the cornerback. 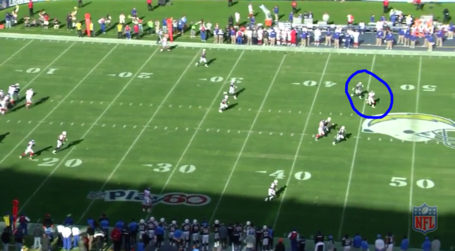 And here he is blowing by that cornerback for a big 50-yard gain.

One concern with Nicks is his effort. He was reportedly fined last year for showing up late to meetings, and some of that reported laziness spilled over to the field, as well. The more I watched film from last year, the more I started to notice Nicks taking some plays off, specifically plays in which he was not a main target and plays in which the defense was overly physical with him.

On this third-and-goal play, Nicks was not the primary target. However, it is a huge down for the Giants, and Eli Manning is trying to extend the play. After getting bumped by two Philadelphia Eagles defenders, look at Nicks' body language: 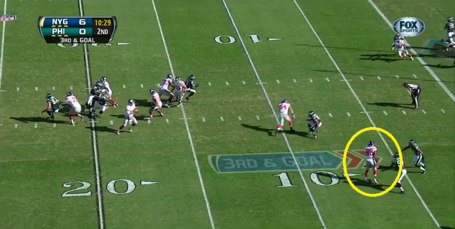 Flat-footed, no interest in shedding his two defenders. That is an Albert Haynesworth type of effort. But effort is kind of hard to capture in stills. Watch this interception from Manning that was caused by Nicks failing to fight through physical play from the corner and, again, giving up on the play.

He seems to break through the bump coverage, but then he just stops his route and makes no effort to get to the ball. That sort of play makes your quarterback look bad when it was really on you to get to that spot on the field.

But Nicks' effort won't be the biggest hurdle for him to suit up in Honolulu Blue next season. Money will be the factor in getting him to Detroit. Nicks made a base salary of $2,725,000 last season while his total cap hit was nearly $4 million. With various teams seeking his services, a bidding war may escalate his contract to numbers well beyond the Lions' price range. Riley Cooper just inked a five-year, $22.5 million contract, and I think it's fair to assume Nicks will get a deal somewhat close to that or even better.

Though Nicks has undeniable talent, his questionable attitude and high price tag make him an unlikely option for the Lions.