What elements of the New Orleans passing attack might show up in Detroit next season?

Share All sharing options for: Projecting the 2014 Lions offense: Part 3

Welcome to Part 3 of our 2014 offensive preview, in which I try to make educated guesses about what elements of the New Orleans offense will show up in Detroit.

Last post, I looked at some elements of the New Orleans play-action passing game, while continuing to worry about the lack of a fullback on the Detroit Lions' roster. In the meantime, we've learned that my concerns may not necessarily have been justified. (To those of you who celebrated the genius of Mark Morrison in the comments of that post: tip of the cap.)

Now that one of my primary concerns has been possibly laid to rest, let's turn to the New Orleans passing attack. Given how things have played out so far, we should all be looking forward to a stacked WR corps by this time next week.

Before we get into things, I should note the obvious: the New Orleans Saints' passing playbook -- or any NFL team's, for that matter -- is unbelievably complex. Trying to break down the entirety of a passing offense would be a fool's errand. It would also bore everyone to death. So, I'll skip past some of the more mundane aspects of the New Orleans pass game. They run plenty of all-curl routes and short-to-intermediate crossing routes, flare passes out of the backfield and things of that nature (a phrase I can already tell would make for a great Jim Caldwell-based drinking game [if you're 21, of course]). What I'd like to look at are a few patterns in particular that help make the Saints' passing game tick. We'll start with the stick and snag routes, and the "triangle" concept.

Chris B. Brown explains the triangle concept in full detail over at Smart Football, and if you have the time and interest, I'd highly recommend it -- the guy's work is fantastic. If not, here's the basic premise: Most NFL route schemes are based on horizontal and vertical "stretches," which attempt to spread out defenses by placing receivers in long horizontal or vertical corridors, thus creating various gaps and passing options against different coverages. As you might surmise from its name, the triangle concept uses three receivers to combine a horizontal and vertical stretch against the defense. One receiver goes to the flat, another goes deep on either a corner or fade route, while the other runs a "snag" or "stick" route. Let's look at an example of the latter: 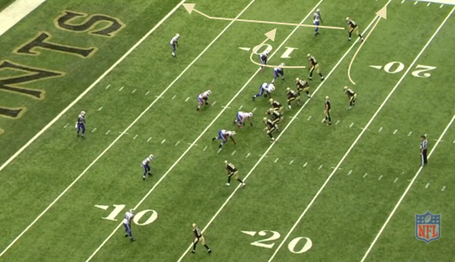 The Saints typically use a running back to account for the route in the flats, as you can see here, but this concept can just as easily be run from a bunch package. The receiver split furthest out runs a fade to the back of the end zone, while Jimmy Graham accounts for the stick. The route basically goes 5 to 6 yards before turning toward the sideline and working the gap between defenders, as we see here: 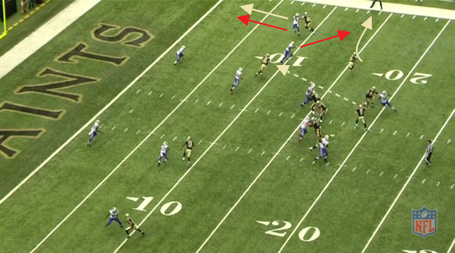 The outside linebacker crashes on the route out of the backfield, creating a nice gap for Graham between that defender and the middle linebacker. Brees delivers the pass to Graham. What would already be an easy 6-yard gain becomes a touchdown, because Graham tends to do things like evade defenders or carry them for 5 yards.

Of course, the stick route isn't limited to Graham, although he runs it often enough. Lance Moore, being quick, shifty and possessing a good sense of spacing, also runs the same route for the Saints (a fact Brown notes in his column).

In fact, Moore's ability to work space allows him to run the snag, as well: 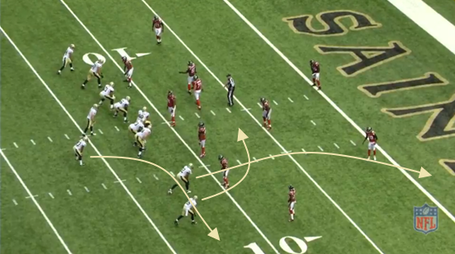 The snag route works the same way as the stick, only with the receiver in question turning inward, rather than outward. Basically a short slant, the snag ends with the receiver once again settling into gaps between two horizontal defenders: 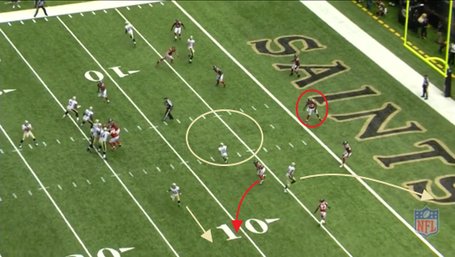 This gap is impossibly overstated in the image due to this being a third-down situation, although given Atlanta's gross incompetence in pass coverage last season, it actually seems feasible.

Moore's ability to settle into soft spots makes him a valuable piece of these concepts in the Saints offense. If the Lions are going to show similar looks, they need a wide receiver who can do the same. I honestly believe that guy is Ryan Broyles, skill-wise, but by the time the season starts, he may no longer have any working ligaments in his legs. Pray for a redemption story (or a windfall in the draft and free agency).

Once you get out of the triangle concepts, another theme in the Saints' passing attack is the use of the deep vertical routes to clear room for late-developing crossing routes from the backside of the play. 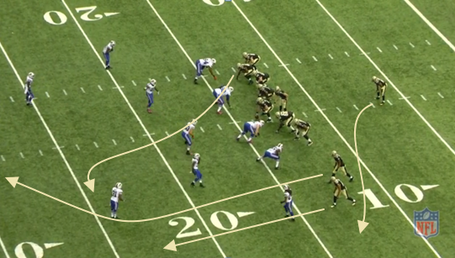 The WRs split out at the bottom of the image run a go route and a deep post, drawing the defenders deep, while the RB leaks out of the backfield into the flats. Ben Watson ends up coming across late (similar to what we talked about last post), once the defenders' attention has turned to the still-developing deep routes: 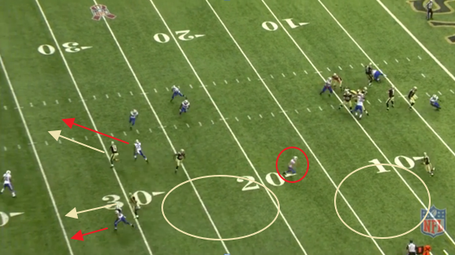 Because this play is so long in developing, you can actually see an example of the vertical "stretch" concept to an insane degree here. One defender -- a linebacker, at that -- accounts for almost a full 20 yards from the line of scrimmage. Having plenty more help behind him, he covers the route in the flats. Watson's 17-yard catch is pretty much a foregone conclusion at this point.

The deep post helps the Saints not only create big gaps in coverage like we see above, but it also allows them to create favorable matchups for their best players using double-moves: 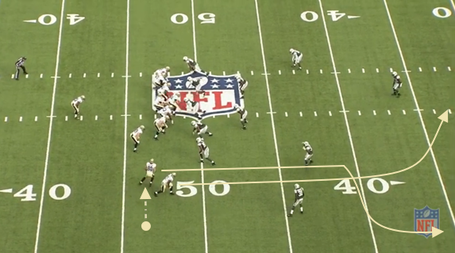 Prior to the snap, Graham -- previously split the farthest out -- motions inside the next WR, presumably to try and force the defense to cover him with a LB or a nickel CB. From there, the now-outermost WR runs the deep post, with Graham turning toward the sideline 12 yards downfield before turning upfield. By the time Graham's second move hits, the single-high safety has already been forced to account for the deep post, leading to this: 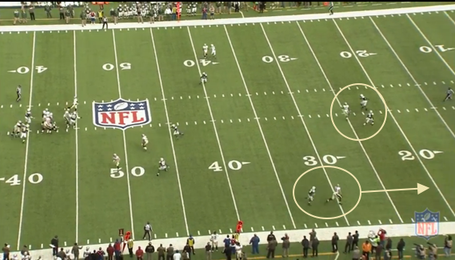 Jimmy Graham one-on-one is an easy choice to make for Drew Brees. Graham one-on-one with a 3-yard cushion requires no thought whatsoever. Graham hauls in the ball, and ends up hauling his man into the end zone.

The Saints will use that same post/double-move combination with Darren Sproles, who they line up all over the field. 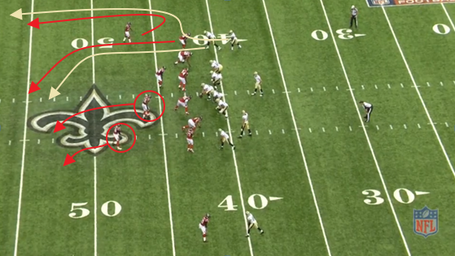 Sproles is lined up behind the WR at the top of the image, technically on the weak side of the formation. Being the weakside, the coverage is already favorable, as the Atlanta Falcons have to account for the routes that develop on the opposite side of the field. The play is a quicker-hitting version of the one with Graham. Both routes break earlier, but the result is the same. What's left is a 20-yard completion to Sproles, who is matched up with a slower defender.

Just like the Saints with Graham and Sproles, the Lions will be more than happy to take Reggie Bush matched up on a linebacker, or Calvin Johnson one-on-one against any human. Of course, there are some caveats here. These plays are all long-developing, without the use of play-action, so actually hitting on them requires time. Brees is great at buying that time by using his uncanny pocket awareness to create room to throw. I think it goes without saying that Matthew Stafford does not possess the pocket awareness of Drew Brees at this point in his career. This is not to say he can't or won't develop it, but it warrants mentioning.

The other, more obvious point is that the Lions simply don't have the WR corps to pull off many of the Saints' more elaborate passing schemes. The Saints roll out at least four solid WRs on game day, and depending on how defenses choose to cover them, any one of them is liable pop off for a big day. If you've ever experienced the abject misery of drafting a Saints WR in fantasy football, you understand exactly what I'm talking about. The Lions, on the other hand, have Calvin Johnson and the faceless horde. We don't need to recap the torrent of injury, cap decisions and mental illness that has ravaged the Lions' WRs. Suffice to say the depth chart is going to have to look a lot different in the next few months for us to see some of the Saints' passing success in Detroit. Jeremy Reisman has begun breaking down free agent targets (I have a thing for Dexter McCluster myself). I'd venture literally every one of you has targets in the draft. We'll see who ends up in the D.

Anyway, that concludes our three-part offensive preview. Thanks for reading, and I'm sure I'll see you around draft time. Gridiron Heroes.