After being released by the New Orleans Saints, wide receiver Lance Moore could be a great fit in Detroit.

With news coming that the New Orleans Saints have released wide receiver Lance Moore, speculation has already linked Moore to the Detroit Lions. Obviously, Moore would be familiar with the playbook that Joe Lombardi is bringing over from New Orleans, but beyond that, is he worth it?

At 30 years old, it's no surprise that Moore's best days are behind him. After a stretch of five seasons in which he totaled 3,512 yards and 34 touchdowns, his production fell off significantly last year. Though his season was shortened by a hand injury, his production was still well below average. He caught more than three passes in just three games last season and never reached 100 yards in one game.

Looking at the tape, it's clear Moore has lost a step physically. However, he compensates nicely with solid route running and superb awareness.

As a predominant slot receiver, Moore runs a lot of quick slants and in routes. In order to excel at this, you need to be able to disguise your route for as long as possible and have quick agility. Moore continues to have these skills. 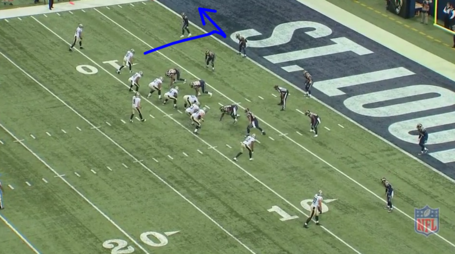 In this goal-line situation, Moore is faking an in route, then kicking out to the sideline. For this to be successful, he really has to sell the in route, and, additionally, have the quickness to beat his man to the outside. 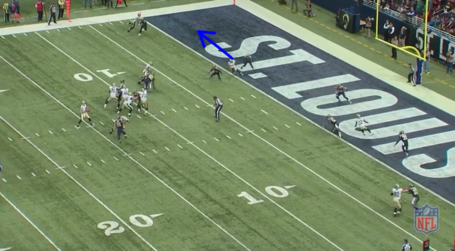 His cut to the inside successfully draws the linebacker toward the center of the field; now it is just a matter of beating the defensive back to the outside. 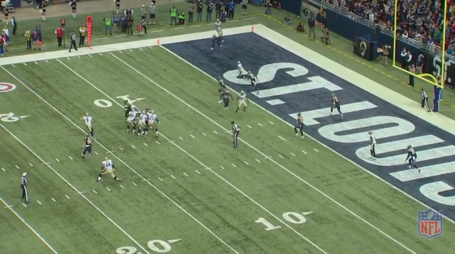 Moore's quick feet give him plenty of room to make the catch, and Drew Brees doesn't miss him.

But in addition to his route-running talent, Moore also has a clear understanding of football concepts and the New Orleans offense. He always seems to know where the first-down markers are, and he knows where to find open space on the field. Take, for example, this play in which Moore successfully identifies the soft spot in the defense's zone. 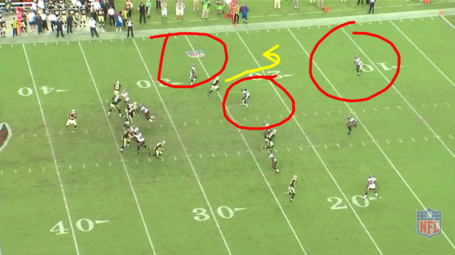 Moore quickly recognizes the defense is playing zone coverage. After being initially forced inside by a defender, Moore knows he needs to cut his route closer to the numbers, away from the linebacker in the middle of the field. After finding that soft spot in the zone... 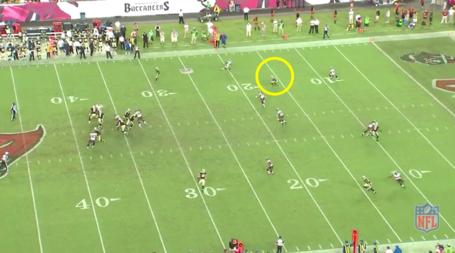 ...he sits there and waits for the ball to arrive, just out of the reach of the linebacker and with plenty of room between the cornerback and safety. This kind of heads-up play makes Moore a valuable asset to an offense learning an entirely new playbook. And I wouldn't sleep completely on his speed, either:

Which leads me to Moore's greatest asset: his touchdown celebrations. The one above was likely the greatest of the year (if you don't know the origin of it, go educate yourself here). But it turns out he has an entire compilation on YouTube (WARNING: hit the mute button unless you want to hear some terrible Saints rap song).

If you're looking for a Nate Burleson replacement, Moore is nearly his exact clone.

The biggest unknown for Moore will be his price tag. He was set to make nearly $4 million with the Saints for each of his next two years under contract. He's clearly not worth that kind of money anymore, which really makes the Saints' decision to cut him very easy. But determining what sort of contract he'll get becomes tricky. Moore will be 31 when the 2014 season begins and his big drop in production in 2013 will scare off a lot of potential buyers. Chances are Moore will get a contract somewhere between the $1.5 - $2.5 million per year range (equivalent to players like Donnie Avery and Earl Bennett).

I wouldn't expect Moore to return to his 2012 form, but at a cheap price, he would make a nice No. 3 receiver. Or, if Ryan Broyles finally emerges as a potential slot receiver, Moore would make for a great locker room presence to groom Broyles into a sharp, well-polished receiver. Moore makes a lot of sense to head to Detroit now that he's released. And while he wouldn't be a huge free-agent acquisition, he would fit in nicely as a cheap role player.