How does Lions' salary cap distribution compare to rest of NFL?

An in-depth look at where the Detroit Lions are spending their money, how it compares to the rest of the NFL and how it affects the NFL Draft.

Share All sharing options for: How does Lions' salary cap distribution compare to rest of NFL?

One aspect of preparing for the NFL Draft is assessing what your team currently has and what it is currently lacking. With an entirely new set of coaches, the Detroit Lions are in a tough position. While they could spend sleepless nights watching tape of their current roster, the staff will never get the complete grasp of their current talent level that many coaching staffs already have in place. However, the Lions coaching staff can be certain how their financial resources are currently being spent. Using those figures, they can see which positions have been overlooked and which positions have more than enough resources being spent on them.

So I went out and did the budget research for them. Using Spotrac's team salaries pages, I tallied the top 51 salary cap hits for 2014 for each of the 32 franchises (during the offseason, only the top 51 salaries count against the cap). NOTE: I did not include dead money from players no longer on the team. Using those numbers, I found the average percentage that teams are spending on each position. The results are below: 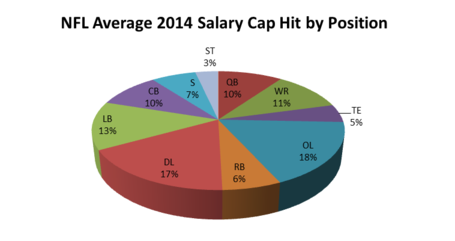 As you can see, salaries are spread pretty evenly between offense and defense. In fact, 49.5% of salary is spent on offense while 47.0% is spent on defense, so the difference is minimal. The majority of salary is spent on both lines, which makes sense since those positions have the most players on it. But it also speaks to the pervasive thinking across the NFL that teams are built from the inside out.

Now let's look at how the Lions distribute their wealth: 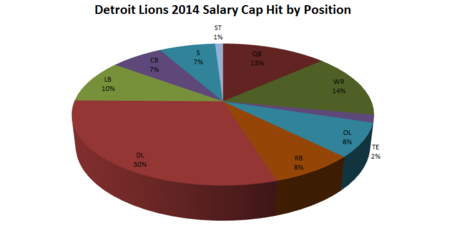 Now before I dive right into the analysis, there are a few things to remember. First, a financial investment does not equal talent. This is no more obvious than when it comes to the Lions' offensive line. While they spent 10% less on their front five, the Lions, by many measures, had one of the best offensive lines in 2013. Additionally, it must be reiterated that there is not one right way to build a team. The two Super Bowl teams from 2013 spent 14.4% and 2.5% of their salaries on their quarterbacks, respectively. I'll let you guess which one is which.

That being said, there are a lot of interesting things we can pull from Detroit's graph. Most obvious is the nearly third of that graph occupied by the defensive line. That should come as no surprise considering Ndamukong Suh's contract alone absorbs 17.7% of the Lions' cap.

Continuing with the defense, it's a bit surprising to see that the majority of the Lions' cap is devoted to that side of the ball. 53.9% of Detroit's salary is spent on the defense, as compared to 45.1% on offense. The secondary -- widely considered as one of Detroit's top needs -- occupies 14% of the Lions' cap, which is actually very close to the league average of 17%.

What was most surprising to me was the apparent misconception that the Lions overspend on skill positions. It is often argued that the Lions spend too many resources on toys (or... shiny baubles) for Matthew Stafford and the defense suffers for it. While the Lions do spend more on average at these positions (24% is allotted to RB, WR and TE, while the league averages 22%), that number is tiny in comparison to the vast difference in defensive line spending. If you are looking for the real reason this team is cap-strapped, look not to the baubles and point your blamey fingers at Suh.

So, where do the Lions go from here? Well, this research has warmed me to the notion of the Lions nabbing an offensive lineman if one of the top prospects falls to them at 10. While the line performed well last year, there is almost no depth there, and Rob Sims and Dominic Raiola are well beyond their best days. In SB Nation's mock draft, Sean Yuille jumped at OT Jake Matthews when he fell to pick 10. I have to say, though I was skeptical of this pick at first, I like it now.

Additionally, I think the Lions should not think twice to target a skill position in the first round (likely WR or TE). Despite the common perception that the Lions are too easily distracted by the SHINY AND NEW, they actually aren't spending too much more than the league average at the position. If they find a guy they love, they should grab him with no hesitation.

Finally, though the Chris Houston injury is worrisome, the Lions don't appear to be in that bad of shape in terms of their secondary. They have devoted a fair amount of resources at the position, and if the new coaching staff can get even a little development out of the players they have now, the Lions will have an average crew in the back four.

The new coaching staff may not know what they have in every player on their roster, but they do know how much they are investing in each one. Using that information, they should ignore the misconceptions about the team and spend money and resources on what they really need.