The Detroit Lions have a new offensive and defensive coordinator, and on Saturday we got a glimpse of what changes may be in store this season.

It's hard to draw many -- if any -- conclusions from a preseason football game in which the first team on each side of the ball only played for one or two drives. However, the Detroit Lions are sporting an all new offense and defense this year, and Saturday night was our first look at the new schemes. While the coaching staff did not dive deep into the playbook, they did show us some interesting looks that are worth exploring. 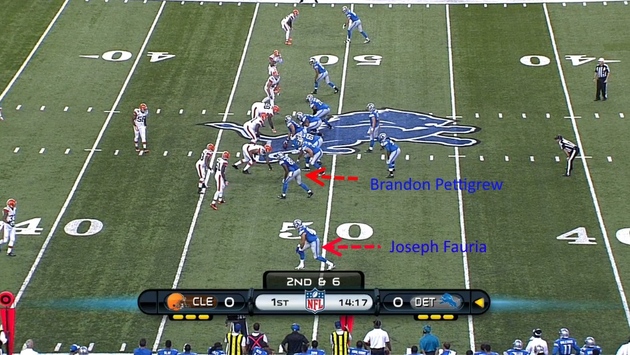 On paper, the Lions are very deep at the tight end position, and if Saturday is any indication, they are going to use that to their advantage. On this play, they had Brandon Pettigrew lined up as the slot receiver and Joseph Fauria out wide. The key to all of the mixing and matching is creating mismatches. The hope is to have a towering tight end in coverage against a short cornerback, or to have a speedy tight end matched opposite a trudging linebacker. As Eric Ebron climbs up the depth chart, he'll be added to the mix and give the Lions another dimension.

The Lions are also particularly talented at running back and don't plan on hiding it. 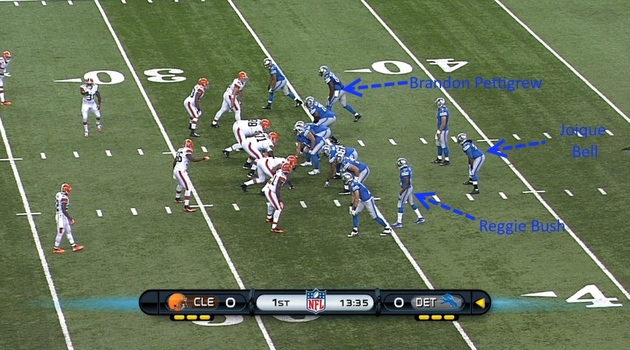 Last year, we were promised we'd see a lot of Joique Bell and Reggie Bush on the field at the same time. That didn't end up happening nearly as often as it should have. I think it's fair to say we will be seeing a lot more of it this year. In the play above, Bell is lined up aside Matthew Stafford, while Bush is lined up as a receiver. The Lions get what they want and have Bush defended by a linebacker. Unfortunately, Bush drops the ball on the play, but again, the Lions' depth of talent earned them the mismatch they were looking for (and without Calvin Johnson).

Of course, perhaps the most significant change on offense doesn't involve wide receivers or tight ends or running backs. I am speaking, of course, of THE RETURN OF THE FULLBACK. 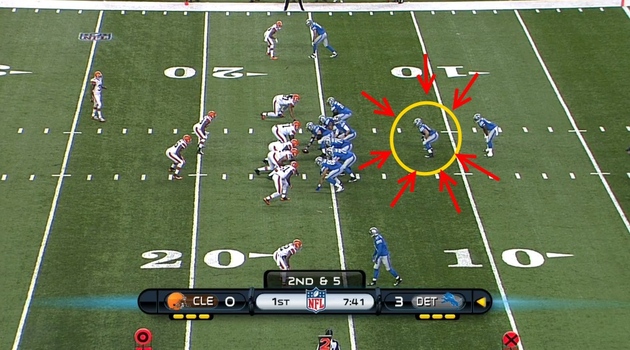 Can you spot the fullback?

On defense, we didn't see as much variety. There was a lot of base 4-3 defense with the occasional nickel package (five defensive backs). However, every now and then, we'd see a little wrinkle that may hint at some interesting formations we'll see throughout the season.

The first formation change was the Lions' use of the "4-3 under" look. 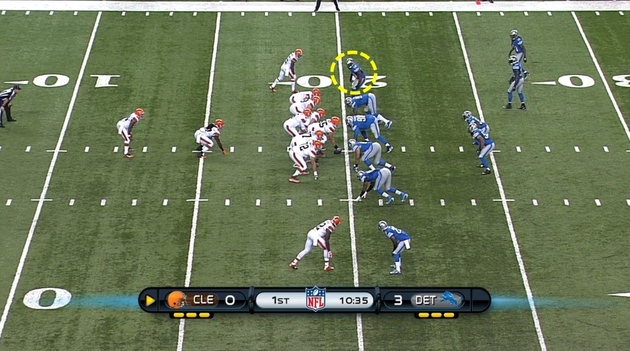 The 4-3 under formation is typified by adding a linebacker to the strong side of the line, while sliding the defensive end and defensive tackle further in towards the ball. In other words, no wide-nine from the defensive end on the strong side of the line, while adding a linebacker to the defensive line (who is actually lined up in the nine-technique). This is a significant change because Kyle Van Noy fits the role of the strongside linebacker (Sam) perfectly here. The role of the Sam linebacker is to help rush the passer, prevent any plays from swinging out wide and occasionally drop in shallow coverage, all things that Van Noy excels at. In fact, later in the game, Van Noy was put in this exact position. Get used to that, because you'll see Van Noy there a lot this season. (For more information on the 4-3 under, check out these links.)

The other tweak of the defense was the return of the strong safety. During the Gunther Cunningham years, the Lions didn't really differentiate between safeties too much, preferring both to play deep the majority of the game. However, things will clearly be different under new defensive coordinator Teryl Austin. 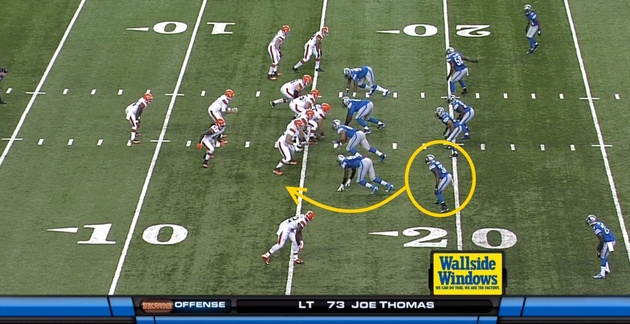 Here we see James Ihedigbo down inside the box, closer to the line than the linebackers. This will not be an uncommon sight, as Ihedigbo plays much better the closer he is to the line of scrimmage. This will increase the burden on Glover Quin and his coverage abilities, but that happens to be his strong suit, as well.

Overall, the Lions are making some neat twists to their game plan that favor the talent they have. I, for one, can't wait to see more of it.