How did the Lions' rookies perform in their NFL debut?

A recap of how the Detroit Lions' 2014 draft picks performed in their first preseason game.

Share All sharing options for: How did the Lions' rookies perform in their NFL debut?

We got our first look at the Detroit Lions' 2014 draft class on Saturday night. While there aren't a lot of stats to wade through to evaluate their performance, there was a good amount of game film. So let's take a deeper look at how the draft class performed against the Cleveland Browns.

Ebron only mustered a single catch in his Lions debut, but that doesn't really tell the entire story. The Lions decided to move Ebron around and see where he is most comfortable. He spent time in the backfield, in the slot, on the line and out wide: 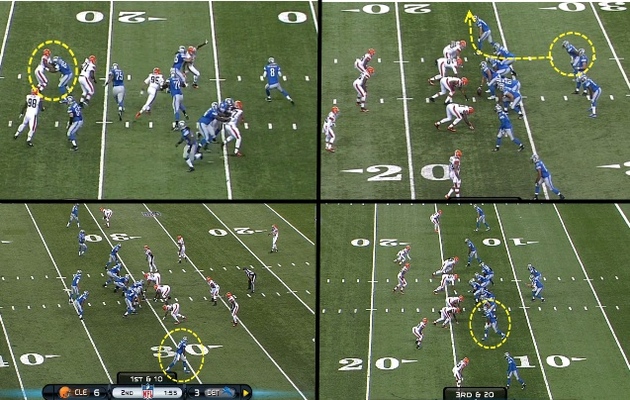 Ebron showed a lot of hesitation and didn't quite seem confident in himself. He didn't get quite as open as one would expect from the athletic rookie. But the Lions are throwing a lot of looks at him, and he may just need some time to learn and grow comfortable. Ebron did show some solid blocking skills, which was a pleasant surprise.

Van Noy had a good amount of playing time in the second and third quarters, playing nearly a third of the defensive snaps on the night. He split his time playing as a true linebacker and a fifth defensive lineman in the "4-3 under" look I spoke about last week. Like Ebron, Van Noy looked to still be learning on the job, but there were flashes of the quick, athletic player the Lions were looking for. 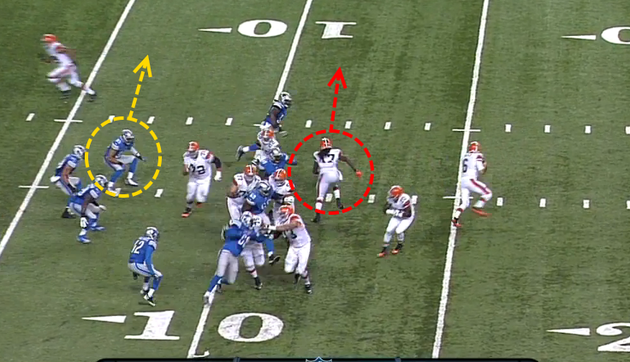 On this play-action call, Van Noy doesn't overcommit to the fake, and he never gets below his assignment. He quickly pivots upward and is able to keep pace with the back. Eventually, he takes down the back and forces the ball loose in the process.

Additionally, Van Noy showed some smarts out there. 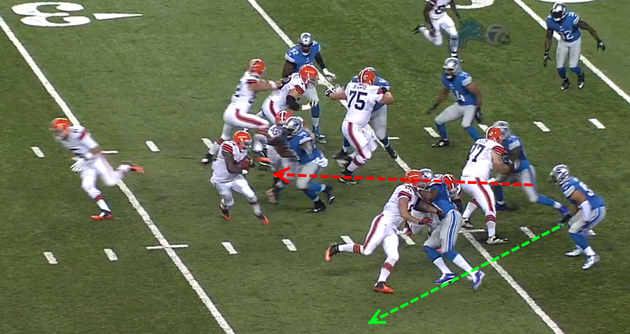 Here, Van Noy was faced with a decision. He's already in great position, staying squared up to the running back, with his eyes focused on the ball carrier. The temptation here is to cut inside and try to attack the back for a big loss. However, in the NFL, he likely isn't quick enough to make that play. Van Noy stays patient and takes the outside route away from the running back, forcing him inside. This gives other Lions in pursuit a chance to make a play, which they do.

Swanson played almost the entire game at center, ceding only the first drive of the game to Dominic Raiola. While his rookie debut was marred by a botched snap in the fourth quarter, overall Swanson played a fairly clean game at center. He didn't give up any obvious pressures and was not called for any penalties. Swanson was by no means dominant in his first game in the NFL, but it was a promising start.

Cornerback analysis is pretty difficult to do without coaches film to study, but Lawson seemed to have a mediocre game. The Lions moved him around as a nickel corner in the third quarter, then tried him as an outside cornerback later in the game. Lawson ceded a few receptions during his time in the game, but he was always very close to his man. He also tallied three solo tackles. Where I'd like to see Lawson improve is his physicality: 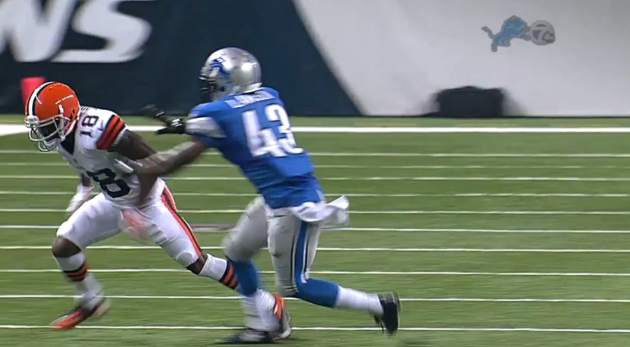 On this third-and-short play, Lawson is in press coverage, trying to disrupt any quick routes. He unfortunately whiffs on his initial punch and is immediately caught chasing the play. The receiver quickly cuts his route short, and the trailing Lawson runs right by him. It's an easy catch for the receiver.

I was very impressed with Webster's first game in the pros. Webster played mostly in the second half, but made the most of his time there. The Lions lined him up both in the nine-technique (i.e. "wide-nine") and the seven-technique. While Webster was impressive in both, he really took advantage of the space he had when lined up in the wide-nine. 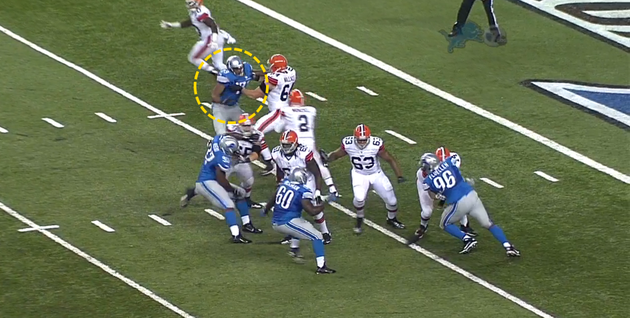 On this play, Webster used the extra space to bring in a lot of force against the right tackle. You can see the offensive lineman literally on his heels trying to stop Webster. Webster eventually slips past the lineman and forces a difficult throw by the quarterback.

On other occasions, Webster effectively used his speed around the edge to create pressure. Overall, Webster had three total tackles, including one tackle for loss. 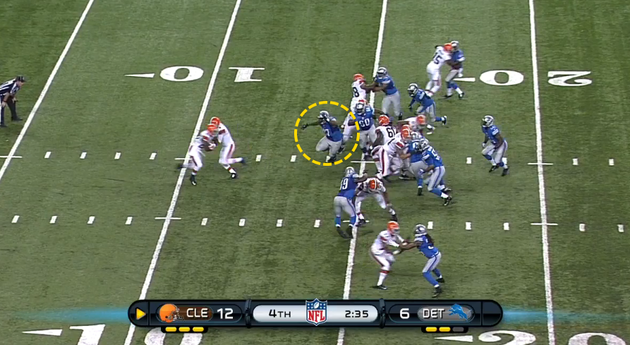 The center tried to chip Reid away from the play, but Caraun quickly sidestepped him and went full speed ahead toward the running back. Reid is well into the backfield before the running back even has the ball in his hands. He finishes the play nicely by neatly wrapping him up and taking him down for a loss.

In a crowded position battle, Reid did well for himself by making plays with his limited snaps.

Jones did not play and remains on the PUP list.

Freese went 2 for 2 on his field goal attempts in his debut. However, the attempts were from just 37 and 32 yards away. Freese also had kickoff duty for the first half, and each of his two kickoff attempts sailed into the end zone (three yards deep and five yards deep). He did what he needed to do in his limited time and may have a slight edge over his competition, Giorgio Tavecchio, who only had an extra point (equivalent to a 33-yarder) and two kickoffs (one a yard deep in the end zone and another nine yards into the end zone).