Here are your Week 2 NFL picks against the spread.

Share All sharing options for: Week 2 NFL picks against the spread: Video killed the Ray-dio star

It's Thursday, so that means football is back and we can stop listening to non-football stuff. You know? Last week was a not-bad-not-great 8-8, but major kudos to Kudos for the 12-4 finish.

Let's throw some Donkey Kong barrels at this week's picks:

I can't think of anything going on in the NFL right now that could possibly be a distraction for the 0-1 Ravens leading up to their second straight home divisional game. Since 1967, only five teams have started the season 0-2 after home games against divisional opponents. It hasn't happened in 25 years.

Well, I think it happens this year. 10 of the last 12 meetings in this rivalry have been decided by three points or fewer. Steelers escape like they did in Week 1.

Jim Kelly is cancer-free. The Bills won their opener on the road in Chicago in overtime. The franchise was sold to the Pegulas, ensuring the team will stay in Buffalo. Pretty good week for the circled wagons. I'm sure Ralph Wilson Stadium will be mildly rowdy.

The Bengals haven't started 2-0 since 2006. The Falcons haven't won two in a row in two years. The Bengals are more due-err... I don't know what to think of the Falcons' strong Week 1 showing, but I think they keep it close again here.

Browns punter Spencer Lanning had a good sense of humor about getting karate kicked by Antonio Brown last week. 0-2 won't be as funny. The Browns could be without Ben Tate and Jordan Cameron, in which case they should brace themselves for a Breesy beating and their ninth straight loss.

I missed badly on the Titans last week -- they looked great under new head coach Ken Whisenhunt and defensive coordinator Ray Horton's 3-4 scheme. So, naturally, I'm going to pick against them again this week.

I actually have a hunch that they will win by a field goal and then be largely ignored while everyone talks about the surprising 0-2 Cowboys.

The Patriots haven't started a season 0-2 in 13 years. Drew Bledsoe got hurt in Week 2 that year, which paved the way for Tom Brady's ascension. Matt Cassel became a known commodity in similar fashion when Brady went down in Week 1 in 2008. Cassel backed the Pats to a 10-5 record and went on to be an overpaid and under-performing quarterback. I think he shows his true colors in the Purple's home opener.

Carson Palmer will probably throw a couple interceptions, but it'll serve him well to get Larry Fitzgerald more involved. The Cardinals defense will be too much for Eli Manthing, who continues to struggle in the Giants' new offense.

I don't think the Redskins are that good, but the Jaguars can't be feeling too great about that lost 17-0 lead against the Eagles in their season opener in Week 1. The Redskins will win by a touchdown if they give the ball to Alfred Morris early and often.

Cam Newton is an a-hole, their kicker is rude and, hey, the Panthers employ a player convicted of domestic abuse! Teams coming off Monday Night Football blowouts are 29-9 against the spread the following week since 2005. Further, I'll be in attendance and the Lions haven't lost a game I've attended since Week 1 of 2008 -- so what if I've only attended two games since then.*

Panthers fans are all like, Donkey Kong sucks. You know something? YOU suck.

*Everything I've said is pending rain on my parade.

The previous five meetings were decided by five points or fewer, but Philip Rivers said he's not going to be afraid to throw Richard Sherman's way. That's probably a mistake.

The Bucs couldn't handle Derek Anderson, so I'm not convinced they can handle Shaun Hill (if he plays). The Rams defensive line held Adrian Peterson to 3.6 yards per carry and Doug Martin, who is obviously not as good, is banged up. (Ignore Cordarrelle Patterson's three carries for 102 yards, because the Bucs don't have a player anywhere near as talented as him.) Yes, Chris Long is out and that's potentially a big loss, but I still like the Rams to bounce back from an embarrassing home defeat in Week 1 by at least keeping it close.

This is just too many points in a divisional game between 2013 playoff teams in Week 2. Yes, the Chiefs are banged up, but this won't get out of hand. Jamaal Charles bounces back with a big game and Alex Smith doesn't turn the ball over three times to keep it close(r).

Eddie Lacy has been cleared to play and the Jets secondary is soft. I have a strong feeling Jarrett Boykin, who played decoy duty last week, is going to be rewarded generously by Aaron Rodgers. The Packers have outscored their Week 2 opponents by a combined 31 points after dropping their last two openers. Expect another blowout here in the home opener.

Jadeveon Clowney is out, but they still have this guy named J.J. Watt and the Raiders are still the Raiders with a rookie quarterback. It doesn't help that Maurice Jones-Drew is iffy with a hand injury.

In the Sunday Night Football game, I expect the Bears to fight for their playoff lives. Playoffs? Playoffs? It's Week 2, I know, but... but ESPN told me it's tough to make the playoffs after starting 0-2, and aren't the Bears supposed to be a playoff team? 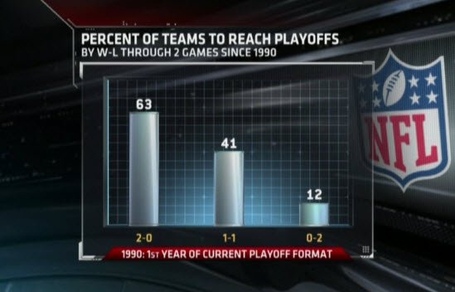 Okay, so it might be misleading, but I think Jay Cutler and the Bears* find a way to make it at least close despite it being the 49ers' new stadium opener.

*This changes if Alshon Jeffery and Brandon Marshall are banged up on game day, of course. 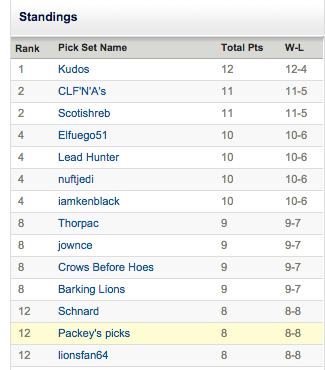 If you're not in these standings, please let me know in the comments and I'll add you below. Thank you.