Things of that nature: Glover Quin's importance against the Panthers

A look at what the Detroit Lions' best defensive back might see in Week 2 against the Carolina Panthers.

Share All sharing options for: Things of that nature: Glover Quin's importance against the Panthers

Every week, I spend an unconscionable amount of work time emailing my brothers about the Detroit Lions. Our conversations alternate between legitimate analysis and INCREDULOUS STATEMENTS IN ALL CAPITAL LETTERS. (Example: "Stafford wore a collared shirt for his post-game press conference." "HIS HAT WAS ON FORWARD DURING HIS ON-FIELD INTERVIEW LAST NIGHT.")

In one of our first emails following the Lions' Week 1 victory over the New York Giants, one of my brothers surmised that most Lions fans were thinking about two things:

The first question is fodder for another day -- I'll wait until the Lions face a differently constructed defense than the Giants (say, the Carolina Panthers) before analyzing how Joe Lombardi uses his bevy of offensive skill players. The answer to the second question is also a little murky, but not so much that I'll avoid talking about it.

Any evaluation of the Lions secondary in Week 1 comes with a "Giant" caveat. (Puns!) The New York offense was downright putrid. Just awful. While we can give the Lions some credit for keeping pressure on Eli Manning and allowing fewer than 200 total yards, we probably can't credit them for a tight end missing a play adjustment at the line of scrimmage and causing an interception (even if that interception was unbelievable).

The Lions' cornerbacks weren't tested much over the course of the game. What little success the Giants did have in the passing game came mostly on 12- to 15-yard tight end routes up the seam, which meant that a lot of the heavy lifting in coverage fell to the Lions' safeties and linebackers. 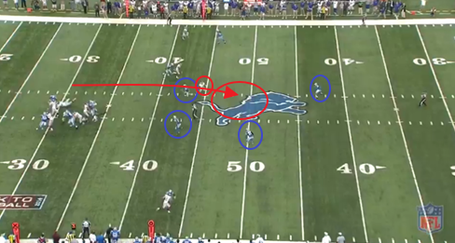 Any throw on a seam route has to hit behind the linebackers, but in front of the safeties. The depth of the linebackers in coverage affects the difficulty of the throw. Here, the pass gets behind Stephen Tulloch and in front of Glover Quin, who plays deep as the free safety. George Johnson, as it happens, got beat inside by this route later in the game when Teryl Austin had him drop into coverage. He actually didn't get beat by as much as you'd think. And besides, you can't fault the effort. Look at that full extension: 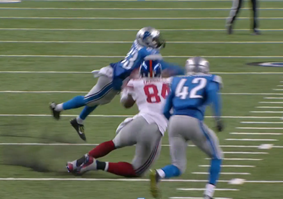 DeAndre Levy also got "beat" up the seam against the Giants, in the sense that Tulloch blitzed on the play, leaving Levy to cover essentially everything between the hash marks for 10 yards downfield. So if you're looking for faults in Levy's game, there you go: he is incapable of simultaneously providing the coverage of two men.

Every time the Giants hit a pass up the seam, it led to a Quin tackle. If the Panthers' Week 1 win is any indication, Quin should get used to that.

The majority of Carolina's passing offense appears to revolve around Greg Olsen and rookie Kelvin Benjamin, which seems like an obvious thing to say about a team giving plenty of snaps to Jason Avant and Jerricho Cotchery. Olsen and Benjamin combined for 175 of Derek Anderson's 230 passing yards against the Tampa Bay Buccaneers, and a great deal of those yards came between the hash marks through a combination of seam routes, deep ins and skinny posts.

Tampa Bay spent most of the game sitting in a two-high shell on defense, which opened up plenty of room for these routes. Presumably, the defense's strategy was to force Anderson to consistently make timely, accurate throws on these intermediate routes and wait for him to make a mistake. That seems like a reasonable goal, but Anderson was actually not terrible! Given how deep Tampa Bay's safeties were in coverage for most of the game, any time Olsen or Benjamin could get behind the linebackers in coverage, the Panthers picked up a first down. Carolina used a decent amount of play-action to bring the linebackers up and get Olsen free downfield: 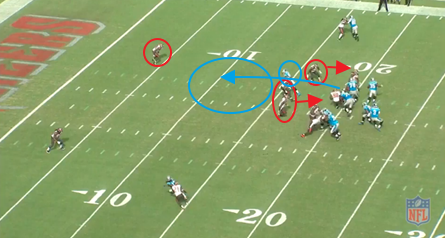 It doesn't get much easier than that. On the ensuing play, Anderson threw a touchdown to a wide-open Olsen on another quick-hitting play-action pass. However, Carolina was content to just have him outrun linebackers up the seam and put the ball in front of him, as well: 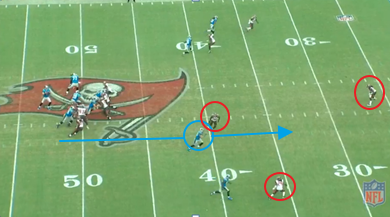 The Panthers continued to exploit this area of the field with Benjamin. 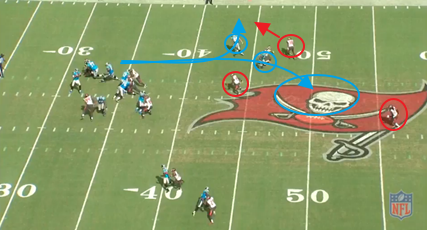 Olsen runs an 8-yard out here, which draws the top safety away from Benjamin's route as it breaks in, giving the wide receiver sole territorial rights over the gigantic pirate flag. 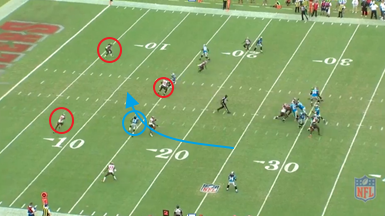 Here the Panthers run three vertical routes simultaneously, forcing the defender between the hash marks to account for the route up the right seam, which breaks outside as Benjamin comes in. This may be difficult to tell, since he's microscopic in this image, but that defender's back is turned to Benjamin as he crosses the left hash mark. Thanks for the 20 yards, Tampa!

The big factor coming into Sunday's game is Cam Newton. Carolina's passing game should be better than in Week 1 by virtue of Newton being better than Anderson. It remains to be seen how much his presence opens up the route tree for Benjamin and Olsen. It could force the Lions to keep a linebacker closer to the line to account for the threat of Newton's legs.

Carolina consistently exploited the conservative two-high shell run by Lovie Smith's defense. Austin, however, does not seem to be a conservative defensive coach. The Lions rarely showed two-high against the Giants, instead opting to bring a strong safety closer to the linebackers with Quin roaming as a true free safety, as we were promised in the offseason. If that's what we see again on Sunday, Quin's role becomes all the more important. All of those intermediate and deep middle routes will come his way. He gets a great deal of help from Levy, who continues to make his case as one of the best coverage linebackers in the NFL. But ultimately, the success of the Lions pass defense against Carolina could come down to how well Quin is able to defend his deep third.