Breaking down the statistical matchup between the Detroit Lions and Carolina Panthers.

Share All sharing options for: On Paper: Detroit Lions at Carolina Panthers

This week, two undefeated teams face off in a huge intra-conference matchup for a place atop the NFC. Okay, maybe that's a bit of an overstatement for a game between the 1-0 Carolina Panthers and 1-0 Detroit Lions, but in terms of Week 2 games, this one is pretty big. It's very easy to see these two teams fighting for playoff spots in December, and this matchup could potentially have a huge influence on grabbing a wild-card spot. With the stakes built up, let's go to the charts. 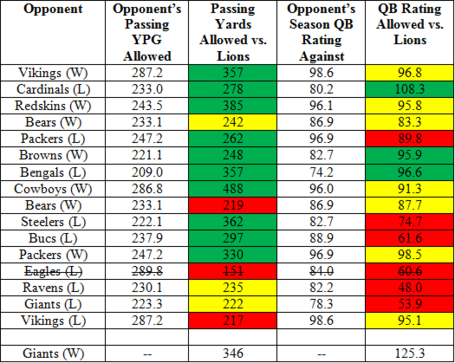 As mentioned last week, the 2013 Lions passing offense had no problem racking up the yards, but it didn't do so in a very efficient way, especially toward the end of the season. If Week 1 of 2014 is any sign, the Lions may have fixed that problem. Matthew Stafford posted a passer rating of 125.3, which is his highest mark since Week 16 in 2011.

Though it's extremely early, the Lions' passing statistics look phenomenal so far. They rank third in passer rating (125.3), first in yards per attempt (10.8!!!) and 10th in completion percentage (68.8). The New York Giants defense was actually very good in 2013, so assuming they haven't taken a huge step backward, the Lions passing attack could be for real this year. 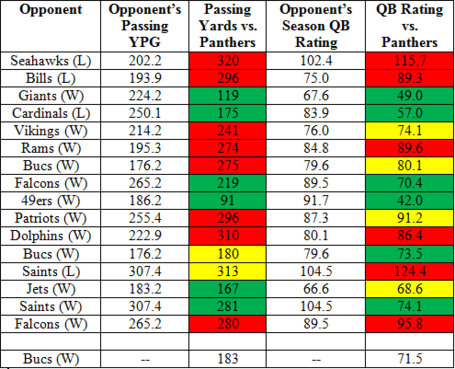 The Panthers' pass defense was a mixed bag last year. Though they ranked sixth by yardage, they actually only held six of 16 opponents significantly below their passing-yard average. A quick glance at their schedule shows that they didn't face too many scary pass offenses (New Orleans Saints aside). Still, in 2013 the Panthers ranked 10th in passer rating allowed (81.4) and ninth in yards per attempt allowed (6.8), but strangely they were 30th in completion percentage allowed (66.6). To summarize, they were a slightly above-average pass defense that was inflated a little because of a weak strength of schedule.

However, there is one part of their pass defense that is undeniably elite: their pass rush. Last year, the Panthers led the league with 60 sacks. After one game this season, they have already tallied three sacks.

Player to watch: Whoever plays right tackle. On Monday night, the Lions' starting and backup right tackles were injured and will most likely not play this week. This leaves either Cornelius Lucas, an undrafted rookie, or Garrett Reynolds, who was re-signed this week after being one of the last players cut in August. Whoever gets the go this week will be up against Charles Johnson, who has had nine sacks or more in each of the past four seasons.

Advantage: Draw. I need a little more evidence before I start believing the Lions have fully fixed all of their offensive problems. If protection holds up, however, they have a very real chance of winning this matchup. The Panthers' secondary is definitely their biggest weakness. Overall, I think the Panthers have too scary of a pass rush, and I think Stafford throws at least one costly pick this week, but if he can limit his mistakes to that, he could still have a good game. 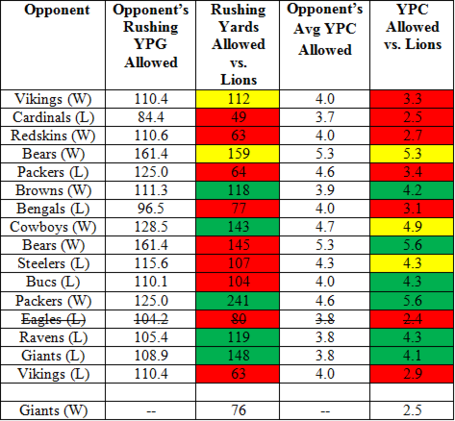 After an average 2013 season running the ball, the Lions kicked off the 2014 season with a very poor performance. Their 2.5 yards per carry was their worst since Week 2 last season. It should be noted that the Giants had one of the best run defenses in the league last year, so all may not be lost. 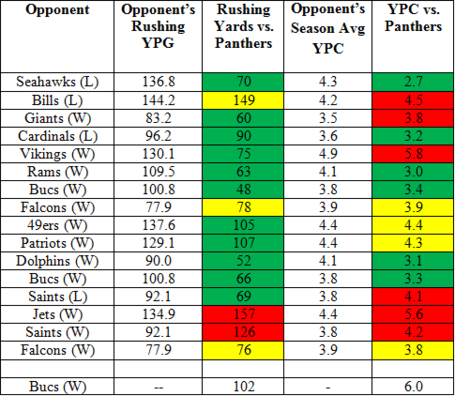 Unfortunately, things don't get much easier this week. The Panthers had the second-ranked run defense last year, and that was no fluke. They only gave up 4.0 yards per carry (t-12th), and they ceded just four rushing touchdowns all year (t-first).

Don't be fooled by last week's performance by the Bucs. If you take away one successful run (strangely by the fullback), Tampa rushed 16 times for 48 yards, or just 3.0 yards per carry. In fact, if you want to take things further and eliminate the quarterback rushes, the Panthers only allowed 21 yards on 13 rushes, or 1.6 yards per carry. So... they're still very good.

Player to watch: Luke Kuechly. The Pro Bowl linebacker has great speed and instincts and can lay the boom on anyone in his path. He will be a big factor in the running game.

Advantage: Panthers +1.5. The Panthers have the clear advantage in this matchup, and I would have given them even more, but the Lions offense goes through their passing game. It'd be nice if the Lions could get something going on the ground, but it isn't absolutely necessary. Either way, don't expect much on the ground from Joique Bell or Reggie Bush this week. 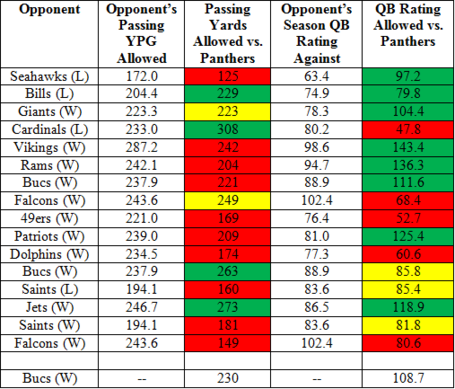 Last season, the Panthers offense struggled to put up gaudy yardage numbers, but ended up being quite efficient. Cam Newton posted passer ratings of 95+ points in seven games, including games against the solid defenses of the Seattle Seahawks, Giants and New England Patriots.

Last week, the Panthers were without Newton, but Derek Anderson performed well in his absence. The Panthers are facing two big questions with this unit: will their pass protection hold up and will this receiving group be enough to make a difference? If Week 1 is any sign, those answers are yes and yes. Anderson was only sacked once on Sunday, and Kelvin Benjamin emerged as a big threat on offense. 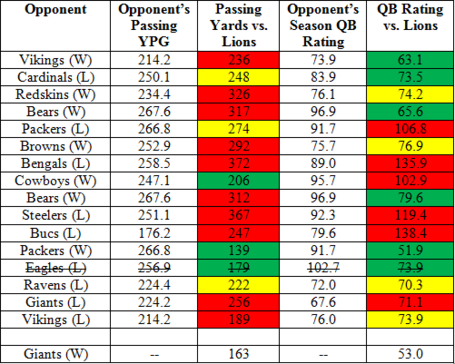 After a below-average 2013 season, the Lions pass defense was fantastic against the Giants on Monday night. However, I am reserving my judgment of this group on the grounds that the Giants' passing attack is likely one of the worst in the league. The Lions played very well, and their secondary wasn't exposed for any big plays, but there is just not enough data on them for me to have any confidence in evaluating them.

Player to watch: Benjamin. In his NFL debut, Kelvin managed to grab six catches for 92 yard and a touchdown. That's a pretty solid debut for the first-round pick. With the Lions' secondary ailing, he has an opportunity to repeat such a performance in his second game.

Advantage: Draw. I just don't have enough conclusive data on this matchup to realistically give one team an advantage here. The Panthers' offensive line is still a very big question mark, as is the Lions' secondary. We also don't know how Cam Newton will look coming off of his rib injury. My best guess is that the Panthers will be fairly efficient in the passing game, but won't explode for over 300 yards. 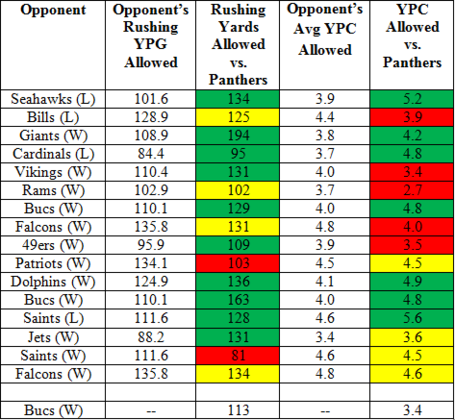 Last year, the Panthers' running game was well above average. They beat yardage averages in 10 of 16 games and yards per carry averages in seven of 16. Overall they ranked 14th in yards per carry (4.2) and third in percentage of rushes resulting in first downs (25.3 percent).

Last week, the Panthers weren't too efficient on the ground, tallying just 3.4 yards per carry. However, they were without Newton, one of their biggest running threats. 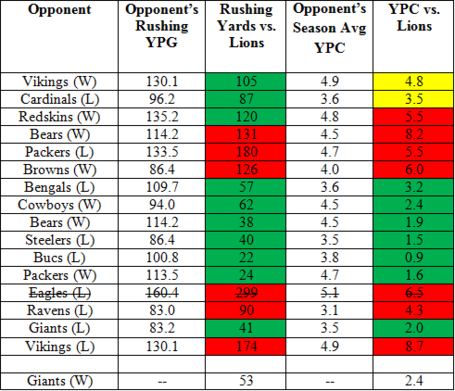 Last week, the Lions continued what was a fairly dominant run defense in 2013. The Giants had absolutely nothing going on the ground, but, again, that comes with the "The Giants are probably terrible" clause. It is probably safe to say the Lions run defense will still be good this year, but it's hard to say how good yet.

Player to watch: Newton. The Panthers' running attack will likely look a lot different than last week. With Newton behind center, expect a lot of option plays and misdirection to compensate for a poor offensive line.

Advantage: Lions +0.5. The Lions run defense is one of their biggest -- and most under-reported -- strengths. Carolina will definitely pose a big challenge for them, but as long as they can avoid giving up the big play (which was a problem last year), they should hold Carolina under control.

Weather. Currently, forecasts show a 41 percent chance of rain during the game. That would undoubtedly favor the Panthers, as they can succeed on offense by running the ball in the trenches, while the Lions would much prefer to throw the ball.

"On Paper" predicted a modest 31-24 victory for the Lions. I very much underestimated how poor New York's passing offense would be and how little Detroit's secondary would be exposed. Still, this one goes in the victory column.

In the comments section, we had a near-perfect prediction from user tim.trammel. Tim predicted a 35-13 victory for the Lions and even correctly predicted a Joique Bell TD rush. Congrats, tim.trammel, here is your prize: 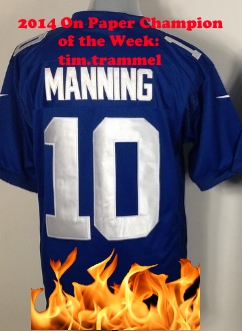 Your very own Eli Manning jersey! I've even taken the liberty of already setting it on fire, saving you the hassle of doing it on your own. I hope it gets to you before it's all ashes.

The Panthers come out with a +1 advantage. Most people tend to overreact to Week 1 results and draw season-long conclusions from that data. That's why I am not quite convinced that the Lions' passing offense is fixed or that the Panthers' offensive line will hold up all year. Despite a fair amount of changes for both teams in the offseason, I expect them both to be similar versions of their 2013 selves. That makes the Panthers a better, deeper team. I see both offenses struggling a bit, with the Panthers eventually wearing the Lions down. Panthers 23, Lions 17.