Breaking down why Cam Newton is so dangerous and what the Detroit Lions can do to stop him on Sunday.

The Detroit Lions are in for a challenge on Sunday as they head to Charlotte to face off against the Carolina Panthers. Unlike the immobile statue that Eli Manning presented on Monday Night Football, Cam Newton presents a load of issues for the Lions. Even at less than 100 percent, Newton still brings the skill and versatility to beat the Lions defense with his arm or legs on nearly any play.

A key for the Lions defense will be to limit Newton's ability to extend plays with his legs. Defenses have traditionally used blitzes, as well as using a spy on defense, to counteract these types of mobile quarterbacks.

I'm going to break down why Cam Newton is so dangerous and what the Lions can do to stop him on Sunday.

Different people probably call it different things, but when I talk about a trap defense, I'm talking about disguising the defense to get the quarterback, especially a mobile one, into going where the defense wants him to go.

Lions defensive coordinator Teryl Austin talked a bit about that concept on Thursday when discussing how to contain Cam Newton:

"That's always a challenge, a guy that can extend the play in the run and pass. So we'll just do our best to try and keep him hemmed up, try to make him run into other people, try to force him back into your help and that'll be something that we'll try and work on this week."

The goal is to get Newton, and the offensive line, thinking you're going to do one thing and then doing another. The Lions used a lot of "A-gap" pressure concepts against the New York Giants last week. The A-gap is the space between the center and the guards. I could see them using similar looks against the Panthers to try to disguise what pressure they're bringing.

A perfect example of A-gap pressure came on a George Johnson sack on third down. 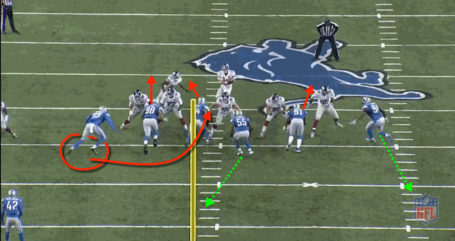 Before the snap, the Lions have six guys at the line of scrimmage. At this point the defense has outnumbered the offense in terms of strict numbers. However, at the snap, the Lions drop two defenders -- Ziggy Ansah and Stephen Tulloch -- into coverage. This is enough to confuse the offensive line and allow for an easy sack on Manning despite only sending four guys on the rush.

The reason this type of defensive scheme can help limit a dual-threat quarterback like Newton is because it can force him to move into an area where the defense wants him to be, in a sense "trapping" him.

On the chalkboard, let's draw up a similar look to the last one, but build it to flush Newton to a specific spot on the field. 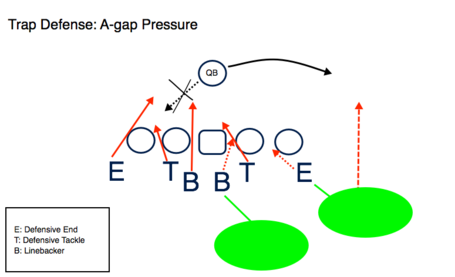 Rather than stunt the defensive end into the A-gap, we'll have him attack the right tackle's outside shoulder to create a strong edge on that side of the line. We'll create a similar look by dropping a linebacker and defensive end. The dropping defensive end should be an athletic guy who can cover ground -- think Ansah or Johnson.

Having a guy like Ndamukong Suh really makes this play go. The offensive line is going to be worried enough about him, let alone the other two linebackers huddled up right in their gaps. By overloading one side of the line, you create a veiled escape route for the quarterback on the opposite side where you have a defensive end able to trail the passer and a linebacker flashing into a potential throwing lane.

In the simplest of terms a spy defense is a scheme in which the defense elects one player to mirror, or spy, the quarterback.

A spy defense can be run out of any formation, but defensive coordinator Teryl Austin has already said he plans on deploying more base 4-3 looks into his game plan this week. That means we should expect to see more three-linebacker sets with DeAndre Levy, Stephen Tulloch and Tahir Whitehead on the field at the same time.

Because of the types of athletes the Lions have on their defensive line, they have a lot of different options for their spy player. They may even mix it up depending on the look the offense gives them.

The main goal, however, is to make the quarterback uncomfortable, whether he's inside or outside of the pocket. The Lions feel like they have the guys to do that.

"When [Newton] reverses field, typically he uses speed to get away from you," Jim Caldwell said. "When you have guys that can chase him they can at least make him throw the ball a little bit faster than he'd like. I mean this guy can run and as big as he is, he's tough to bring down as well. But to have guys on the edges like Ziggy (Ezekiel Ansah), like George (Johnson) and Devin (Taylor), that can get up and go, it really helps us."

Spying the quarterback also has its drawbacks. If you use a lineman, you're leaving only three guys to truly rush the passer. If you use a linebacker as the spy, your defense in vulnerable in coverage because you're essentially committing five guys to the rush.

The Lions will have their work cut out for them on Sunday. Cam Newton is making his season debut in front of the home crowd and will be looking to make his mark. I expect the Lions defense to disguise coverages and pressures to confuse Newton and limit his athletic ability.