Breaking down the call: Are you trippin'?

At a crucial point in Sunday's game, the Detroit Lions were called for a bizarre tripping penalty. Was it the right call?

Share All sharing options for: Breaking down the call: Are you trippin'?

After Jeremy Ross had seemingly fumbled Sunday's game away late in the fourth quarter, the Detroit Lions were desperately looking for a big play from the defense to hold the Carolina Panthers within two scores. On the very next play, Devin Taylor and Ndamukong Suh combined for a big sack of Cam Newton, pushing the Panthers out of field goal range. However, Taylor was flagged for tripping on the play, and the Panthers added an easy field goal four plays later, putting the game out of reach for the Lions.

Let's take a look at the rulebook and break down whether the right call was made.

Here's what it says verbatim in the NFL rulebook:

Article 8: Tripping by Defensive Player. A defensive player is prohibited from tripping an opponent, including the runner.

Hmmmm... not much detail there. Got anything else, rulebook?

Penalty: For tripping by the defense: Loss of 10 yards and an automatic first down.

Okay, I guess one sentence with no description as to what is and what is not a trip will have to do. Apparently tripping is a black and white rule with no gray area. We'll see about that.

Slowed down, it is pretty clear Taylor extends his foot more than a normal step in order to get a piece of Newton. He reaches out with that left foot and causes Newton to stumble and eventually be tackled by Suh. But there's something else going on in this play.

Those of you who hold grudges against officials for long periods of time (like I do) may remember that Suh was called for the exact same thing last season against Green Bay. What did that one look like?

It's hard to tell if Suh reaches his foot out from this angle, but, trust me, he does. The reason I chose this angle was to illustrate why Suh tries to trip Aaron Rodgers. It's because he's clearly being held by the offensive lineman and has no other option but to reach his foot out to make a play.

So was Taylor being held? 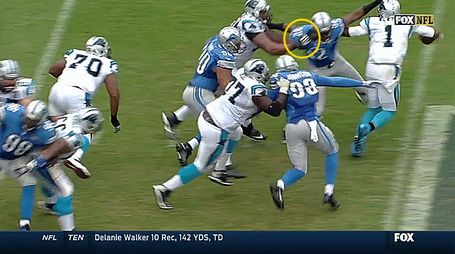 Uh... yeah. The lineman has a firm grasp on Taylor's shoulder pads, disabling him from turning and running with Newton. His only chance to take him down is to stretch his body as far as possible as Newton runs by him, resulting in a trip.

Verdict: Devin Taylor was correctly called for a tripping penalty. However, there should have been a holding penalty on the Panthers, resulting in offsetting penalties and a repeat of the down.

If the correct call would have been made, it's unlikely it would have changed the outcome of the game. Carolina still would have had the ball deep in Detroit territory and most likely would have added a field goal anyway. But this call gets at a part of the rulebook that could use some altering. A trip shouldn't be a black and white issue. How can the defender be blamed when holding was the direct cause of the trip? I'm not saying the NFL should allow tripping if the defense is being held, but the refs need to be cognizant as to why these defenders are doing it. But, as we all know, it's hard out there for a defensive player.